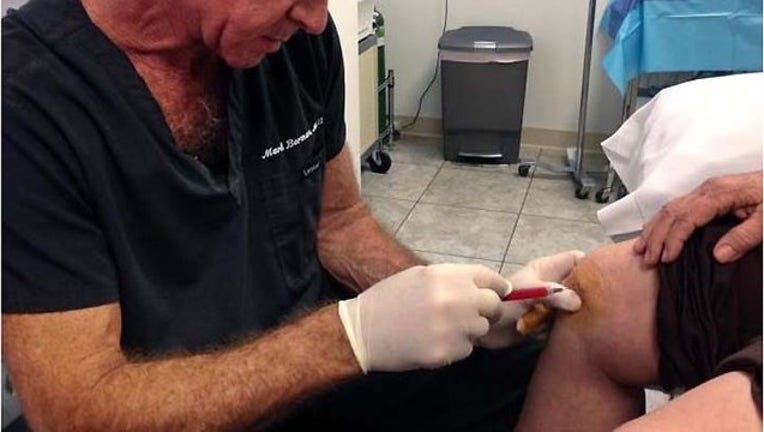 C.J. Nitkowski had nothing to lose in spring 2011. The rotator cuff in his left shoulder that he'd relied on during his decade as a major league pitcher was in tatters. He was 38 and his fastball traveled a Little League-worthy 50 mph.

Surgery and the ensuing lengthy rehab would have killed his career. So Nitkowski paid $3,000 to have stem cells extracted from his waist, separated then injected back into his shoulder.

"I look at it as a last shot," Nitkowski said.

The ensuing "boost" he felt helped him sign a minor-league deal with the New York Mets in 2012. Though he never made it back to the majors before retiring in 2013, Nitkowski is confident he'd wrung out every last ounce of talent. While not an advocate for stem cell therapy, as one of the few athletes who have gone public on the treatment he understands why active players approach him about it.

"I can't give a recommendation," Nitkowski said. "I can only tell my story. I feel like, based on what I believe, that (stem cell therapy) would almost become like maintenance ... if they generate tissue."

That "if" remains problematic for professional athletes and teams that pay them millions. Several years after Nitkowski's procedure, debate on stem cell therapy for helping rehab injuries is no closer to resolution.

Blame it on a lack of study and still-evolving knowledge about what stem cells can and can't do. Blame hype that typically accompanies every new method that attempts to quicken recovery from serious injury.

Players and agents are paying attention.

"They want the cutting edge, anything that is cutting edge that can get their guys a couple more years in the league," said Dr. Jim Bradley, orthopedic surgeon for the NFL's Pittsburgh Steelers. "If I was an agent, I'd want the same thing."

Yet while Bradley is bullish on its potential, he spends a fair amount of time explaining what exactly stem cell therapy does, ostensibly. Adult stem cells are undifferentiated cells found throughout the body that can divide rapidly and help repair tissue. The belief is that stem cells can serve as reinforcements to an injured muscle or joint.

But nearly all evidence is anecdotal -- no definitive lab results show it works. That has done little to damper interest.

"Everybody wants answers right now and you can't have them right now," Bradley said.

At least not in the United States, where medical regulation is more restrictive than elsewhere. To avoid scrutiny from the Food and Drug Administration, stem cell doctors generally perform same-day procedures similar to what Nitkowski received. That's not the case overseas.

Clinics in various countries in Europe, Australia and Asia offer far more aggressive therapies. Patients can have stem cells taken out then grown in a laboratory for weeks, producing millions more cells.

Bradley believes those countries are 10 years ahead of the United States on stem cell therapy. He has referred some patients (not Steelers, following team policy) to a practice in the Cayman Islands he considers safe.

Athletes who go outside the U.S. generally do so quietly. News reports said Peyton Manning traveled to Germany in 2011 while recovering from neck surgery, but Manning hasn't spoken publicly about the issue. Tennis star Rafael Nadal had stem cell treatment in 2014 to help his ailing back but hasn't endorsed the procedure.

Pro teams in the United States can't prohibit players dealing with injuries from seeking as many opinions as they want. But teams don't automatically endorse treatments.

"If the player does something we're not recommending, it's more or less on them," Steelers general manager Kevin Colbert said. "We firmly recommend that you stay here."

"Traveling to a place like the Caymans, that's like saying `I'm going to Mexico to have an appendectomy to save $80,"' said Dr. Matthew Matava, head physician for the St. Louis Rams and the NHL's St. Louis Blues. "It looks like it's not very smart or you're grasping at straws."

In some ways, research on stem cells remains in the embryonic stages.

"There is so much hype, so much marketing," said Matava, president of the NFL's Physician Society. "The market kind of outpaces the research and the validation."

Dr. Freddie Fu, head physician for University of Pittsburgh athletics, takes his skepticism farther. Fu's had stem cells in his lab for 15 years but refuses to use them on humans because of uncertainty, including unpredictability of what manipulated cells will do once introduced to a new area.

"You can have one cell be Obi Wan Kenobi, the other is Darth Vader," Fu said. "You're not sure which way it's going to go."

Fu is all for progress. Yet for all of sports medicine's advances over the last half-century, some laws of nature remain intractable.

"If you get hurt, it's going to take time to heal," Fu said. "It's a part of life. There's always a way to think that maybe something is better, but it might not be."