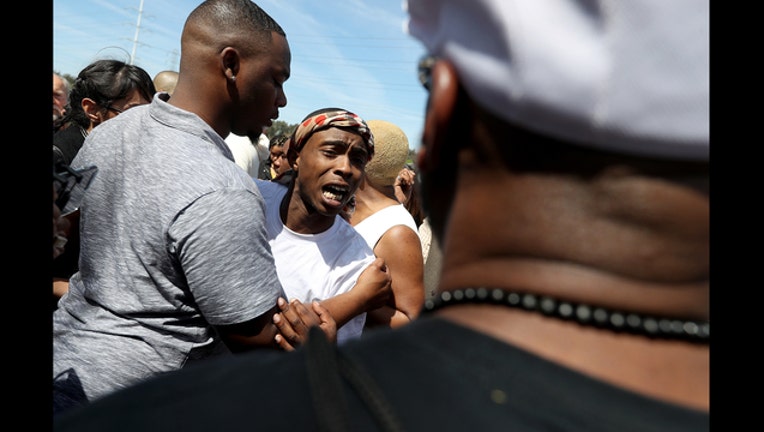 Stevante Clark, whose brother Stephon was shot and killed by Sacramento police, reacts as he meets with mourners outside of the funeral services for Stephon on March 29, 2018 in Sacramento, California. (Photo by Justin Sullivan/Getty Images)

SACRAMENTO, Calif. (AP) -- California prosecutors on Monday charged the brother of an unarmed black man who was recently shot to death by Sacramento police with misdemeanor assault and vandalism.

The charges, which also include making criminal threats and abusing a 911 line, stem from Stevante Clark's dispute with his landlords. The Sacramento County district attorney's office filed them as misdemeanors, which can bring less than a year in jail, instead of the more serious felonies sought by police.

Spokeswoman Ruanne Dozier said prosecutors invited Clark to apply for acceptance to a mental health court, where charges would be dismissed if he completed the program.

Clark, 25, has been open about his mental health struggles since his brother, Stephon Clark, was killed, sparking a series of protests that shut down freeways and blocked access to Sacramento Kings basketball games.

Police fatally shot the 22-year-old in his grandparents' backyard last month when they say he approached them with a cellphone that they mistook for a gun.

The charges against Stevante Clark allege that he threatened a landlord with violence and did more than $400 in damage to their house and property, including defacing it with graffiti. They also allege that he assaulted a woman with a hammer.

Clark was released without bail Monday and expects to hire his own lawyer.