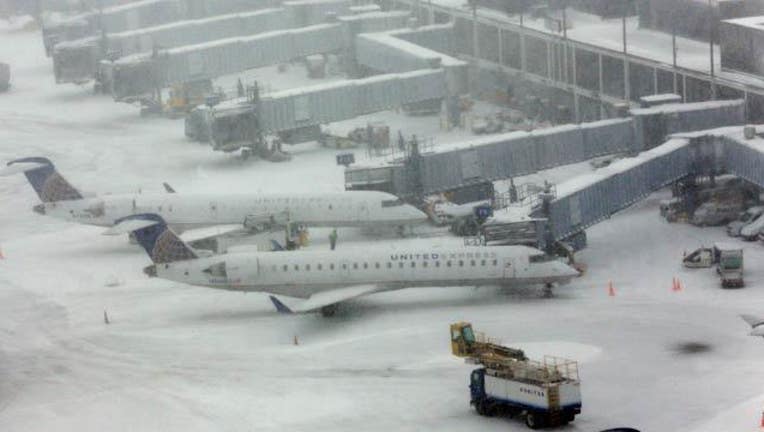 CHICAGO (KTVU-AP) — A slow-moving winter storm blanketed a large swath of the Plains and Midwest in snow Sunday, forcing the cancellation of thousands of flights, making roads treacherous and forcing some people to rethink their plans to attend Super Bowl parties.

Blizzard conditions developed in Chicago — where more than a foot had fallen by evening — and other Midwest locales as the system slowly crept eastward into Pennsylvania and western New York state. Parts of New England still digging out from a storm early last week were readying for yet another round of snow to arrive Sunday and last through Monday.

The snowstorm was expected to be the most far-reaching of the season to date, stretching from Nebraska to Maine, according to the National Weather Service.

Forecasters also said the storm was moving unusually slowly, meaning accumulations of between 10 to 16 inches of snow are possible for parts of northern Illinois, Indiana and northwest Ohio. Similar amounts of snow are expected for the Northeast later Sunday and throughout Monday.

"It's not wise to travel, unless you have an emergency," said David Beachler a National Weather Service meteorologist in the Chicago area.

Craig Owens, an English professor at Drake University, was one of the many Midwest residents who spent the morning shoveling their driveways.

"I'm not going to make it the gym anyway, so I've got to get a workout somehow," said Owens, whose home in Des Moines, Iowa, got about 10 inches of snow.

More than 2,000 flights were canceled in the Midwest, the vast majority of which were in or out of Chicago's two airports.

The winds — gusts up to 45 mph were expected in the Chicago area — made road travel tricky too. Illinois Gov. Bruce Rauner cautioned against any travel and put state agencies on alert.

The Illinois Department of Transportation dispatched 350 trucks to clear and salt Chicago-area roadways ahead of Monday's morning rush hour, and the city said late Sunday that it was sending out 150 more pieces of heavy equipment for road work.

The weather led to power outages, including roughly 10,000 ComEd customers in Illinois on Sunday evening. The weather cut power to nearly 8,000 northern Indiana homes and businesses.

Chicago Public Schools announced Sunday night that the next day's classes were canceled due to the danger for children traveling to schools. The district, the nation's third largest, said it expected that classes would resume Tuesday.

In Nebraska, a truck driver and a 62-year-old woman were killed in separate traffic accidents on snowy roads. In Wisconsin, the Milwaukee County Medical Examiner's Office said a 64-year-old man with a history of cardiac problems was found dead Sunday in his garage after shoveling snow.

The most intense period of snow in the Midwest was expected to hit Sunday evening, right around game time, meaning the roads could be treacherous for those heading to Super Bowl parties. Potential wind gusts of up to 40 mph were expected, so drivers could face terrible visibility and snarling snow drifts.

Several of the Chicago area's top tourist attractions closed early Sunday because of the weather, including the Shedd Aquarium, Adler Planetarium and Brookfield Zoo. Officials with Comcast in Chicago said they had extra technicians on call to help resolve outages ahead of the game.

The city's pizzerias, though, were expecting heavy demand for deliveries during the game. And bars hosting Super Bowl parties said they wouldn't let the weather spoil their plans.

Kathi Kreger, manager at Brendan's Pub, a Patriots' bar on the city's North Side, said locals would still trudge through the snow for the festivities.

In the southeastern Wisconsin city of New Berlin, meanwhile, sports bar Matty's Bar & Grill was preparing for a strong turnout, despite the weather.

"Here in Wisconsin, with the snow, we're pretty used to it," general manager Mark Lombardo said. "Lots of folks have the big four-wheel trucks. The snow doesn't really slow them down."

Parts of New England — still recovering from a blizzard early last week that buried the region in snow — braced for Monday.

The weather service said that many parts of New England could get between 8 and 14 inches of snow and that parts of western Massachusetts and Connecticut could get as much as 16 inches. Southern Vermont was expected to get its first flakes around 3 a.m. Monday, and snow should start falling in Concord, New Hampshire, and Portland, Maine, a few hours later.

Boston schools were scheduled to be closed Monday.

Philadelphia International Airport officials said they were gearing up to deal with the winter storm expected overnight, including pre-treating runways with chemicals.

A winter storm warning was in effect for New York City starting at 7 p.m. Sunday and was expected to remain in effect until Monday evening. Mayor Bill de Blasio said residents should be ready for a snowy and icy commute.