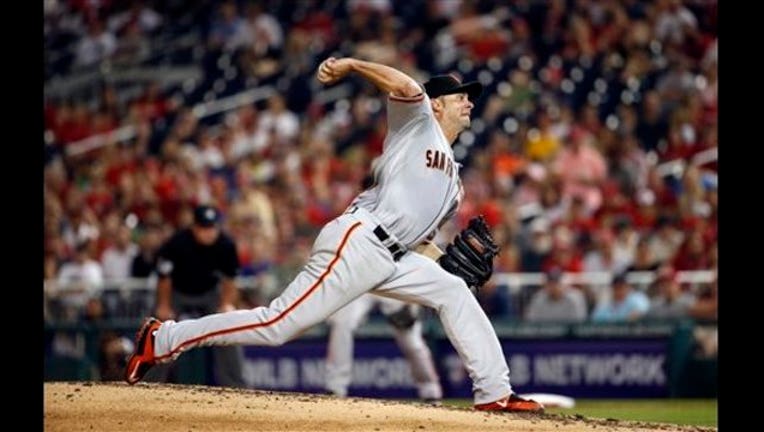 The patriotic version he used on July 4 against Madison Bumgarner and the San Francisco Giants was no exception.

Harper homered,Tyler Moore drove in four runs and the Washington Nationals defeated the San Francisco Giants 9-3 on Saturday despite Stephen Strasburg exiting in the fourth inning with tightness in his left side.

The bat was painted blue with white stars. It was also illustrated with the American flag and a silhouette of the D.C. skyline, including the Capitol, the Lincoln Memorial and the Washington Monument -- all in navy blue and white.

"I had it in the back. I went back there today and I was like, why not," Harper said. "I might get in trouble swinging it. So be it. I thought it was pretty cool, pretty patriotic. Definitely being in D.C., playing for the Nationals."

Rain delayed the game's scheduled first pitch by 19 minutes. Washington's offense got to Madison Bumgarner (8-5) quickly with four consecutive hits including home runs by Michael A. Taylor and Harper.

"I might get a call or a letter or something like that, maybe a warning," Harper continued. "It's a one day kind of thing. I think it's pretty cool to be able to do stuff like that. Guys have (personalized) cleats and batting gloves. Why not have a bat?"

Including Friday's 2-1 victory, the Nationals opened the series with consecutive wins after losing two straight in Atlanta.

The top of Washington's lineup had their bats working from the start.

Taylor drilled the first pitch of the game from Bumgarner just over the left field wall. The second pitch barely stayed in the park. Yunel Escobar's fly ball smacked off the wall in center for a double.

Washington went up 3-0 three pitches later. The lefty-swinging Harper turned on a fastball for his 25th home run of the year.

Bumgarner allowed a single to Wilson Ramos before recording his first out. He surrendered a season-high six runs and eight hits in five innings plus two batters.

The 2014 World Series MVP had not allowed more than two runs in any of his previous four starts, but went 1-2 in that stretch.

"He just got ambushed," Giants manager Bruce Bochy said of Bumgarner. "They jumped him early with a couple mistakes."

Tanner Roark (4-3) earned the win after pitching 4 1/3 innings in relief of Strasburg.

Strasburg allowed one hit over 3 2/3 scoreless innings in his third start since coming off the disabled list. The right-hander previously missed nearly four weeks due to neck tightness.

He winced and grabbed in the area of his left side after making an attempt at Buster Posey's groundball out. Strasburg walked off the mound and into the dugout following a lengthy conversation with Nationals manager Matt Williams and a team trainer.

"It's pretty tight," Strasburg said. "Don't really have an explanation. Everything felt pretty good. I just threw a pitch to Posey there. He grounded out and I just felt it grab."

Washington's numerous injuries has led to Williams using Moore and other reserves extensively. Moore's RBI double off Bumgarner in the fourth scored Washington's fourth run. Another two-base hit drove in two in the sixth. Moore added an RBI single during a three-run seventh.

Giants: OF Angel Pagan is expected to play Sunday after being out of the starting lineup for the second time in three games, Bochy said. He reportedly dealt with a swollen left knee during the previous series against Miami.

Nationals: Strasburg went 2-0 with a 1.50 ERA and 15 strikeouts in his previous two starts since returning.

Nationals: RHP Jordan Zimmermann (6-5, 3.16) faces the Giants for the first time since allowing one run over 8 2/3 innings in Game 2 of their NLDS matchup last year. Washington lost 2-1 in 18 innings.

Giants outfielder Ryan Lollis, 28, went 0 for 4 with a strikeout in his major league debut.