Russian troops stormed toward Ukraine's capital early Saturday as explosions reverberated through the city and the president urged the country to "stand firm" against the siege that could determine its future. He refused American help to evacuate, saying: "The fight is here."

KYIV, Ukraine - Kyiv officials are warning residents that street fighting is underway against Russian forces, and they are urging people to seek shelter.

The warning issued Saturday advised residents to remain in shelters, to avoid going near windows or on balconies, and to take precautions against being hit by debris or bullets.

Russian troops stormed toward Ukraine's capital early Saturday as explosions reverberated through the city and the president urged the country to "stand firm" against the siege that could determine its future. He refused American help to evacuate, saying: "The fight is here."

Hundreds of casualties were reported in the fighting, which included shelling that sliced through a Kyiv apartment building and pummeled bridges and schools. There also were growing signs that Russia may be seeking to overthrow Ukraine's government, which U.S. officials have described as Russian President Vladimir Putin's ultimate objective.

The assault represented Putin's boldest effort yet to redraw the world map and revive Moscow's Cold War-era influence. It triggered new international efforts to end the invasion, including direct sanctions on Putin.

As his country confronted explosions and gunfire, and as the fate of Kyiv hung in the balance, Ukraine President Volodymyr Zelenskyy appealed for a cease-fire and warned in a bleak statement that multiple cities were under attack.

"This night we have to stand firm," he said. "The fate of Ukraine is being decided right now."

Zelenskyy was urged to evacuate Kyiv at the behest of the U.S. government but turned down the offer, according to a senior American intelligence official with direct knowledge of the conversation. The official quoted the president as saying that "the fight is here" and that he needed anti-tank ammunition but "not a ride."

For their part, U.S. defense officials believe the Russian offensive has encountered considerable resistance and is proceeding slower than Moscow had envisioned, though that could change quickly.

The Kremlin accepted Kyiv's offer to hold talks, but it appeared to be an effort to squeeze concessions out of the embattled Zelenskyy instead of a gesture toward a diplomatic solution.

The Russian military continued its advance, laying claim Friday to the southern Ukraine city of Melitopol. Still, it was unclear in the fog of war how much of Ukraine is still under Ukrainian control and how much or little Russian forces have seized.

As fighting persisted, Ukraine's military reported shooting down an II-76 Russian transport plane carrying paratroopers near Vasylkiv, a city 25 miles (40 kilometers) south of Kyiv, an account confirmed by a senior American intelligence official. It was unclear how many were on board. Transport planes can carry up to 125 paratroopers.

A second Russian military transport plane was shot down near Bila Tserkva, 50 miles (85 kilometers) south of Kyiv, according to two American officials with direct knowledge of conditions on the ground in Ukraine.

The Russian military has not commented on either plane.

The U.S. and other global powers slapped ever-tougher sanctions on Russia as the invasion reverberated through the world's economy and energy supplies, threatening to further hit ordinary households. U.N. officials said millions could flee Ukraine. Sports leagues moved to punish Russia and even the popular Eurovision song contest banned it from the May finals in Italy.

Through it all, Russia remained unbowed, vetoing a U.N. Security Council resolution demanding that it stop attacking Ukraine and withdraw troops immediately. The veto was expected, but the U.S. and its supporters argued that the effort would highlight Moscow's international isolation. The 11-1 vote, with China, India and the United Arab Emirates abstaining, showed significant but not total opposition to Russia's invasion of its smaller, militarily weaker neighbor. 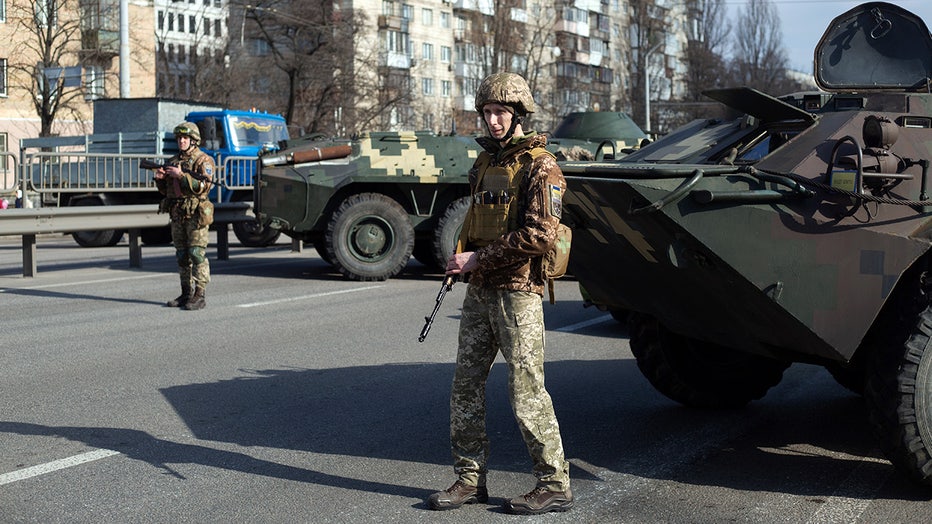 Ukrainian servicemen stand on patrol at a security checkpoint on February 25, 2022 in Kyiv, Ukraine. (Photo by Anastasia Vlasova/Getty Images)

The meeting exposed Russia-Ukraine frictions, including when Ukrainian Ambassador Sergiy Kyslytsya requested a moment of silence to pray for those killed and asked Russian Ambassador Vassily Nebenzia to pray "for salvation." Nebenzia retorted that the remembrance should include people who have died in eastern Ukraine's Donbas region. Pro-Russian separatists there have been fighting the Ukrainian government, which Russia accuses of abuses. A moment of tense silence did ensue.

NATO, meanwhile, decided to send parts of the alliance's response force to help protect its member nations in the east for the first time. NATO did not say how many troops would be deployed but added that it would involve land, sea and air power.

A large boom was heard in the evening near Maidan Nezalezhnosti, the square in central Kyiv that was the heart of protests which led to the 2014 ouster of a Kremlin-friendly president. The cause was not immediately known.

Five explosions struck near a major power plant on Kyiv's eastern outskirts, said Mayor Vitaly Klitschko. There was no information on what caused them, and no electrical outages were immediately reported.

It was unclear how many people overall had died. Ukrainian officials reported at least 137 deaths on their side from the first full day of fighting and claimed hundreds on the Russian one. Russian authorities released no casualty figures.

U.N. officials reported 25 civilian deaths, mostly from shelling and airstrikes, and said that 100,000 people were believed to have left their homes. They estimate that up to 4 million could flee if the fighting escalates.

Zelenskyy tweeted that he and U.S. President Joe Biden spoke by phone and discussed "strengthening sanctions, concrete defense assistance and an antiwar coalition."

Late Friday, Biden signed a memo clearing the way for the U.S. to expedite more than $500 million in emergency military assistance to the Ukrainian government, though it was not immediately clear how quickly the aid would flow.

Zelenskyy's whereabouts were kept secret after Zelenskyy told European leaders in a call Thursday that he was Russia's No. 1 target -- and that they might not see him again alive. His office later released a video of him standing with senior aides outside the presidential office and saying that he and other government officials would stay in the capital.

Zelenskyy earlier offered to negotiate on a key Putin demand: that Ukraine declare itself neutral and abandon its ambition of joining NATO. The Kremlin said Kyiv initially agreed to have talks in Minsk, then said it would prefer Warsaw and later halted communications. Foreign Ministry spokeswoman Maria Zakharova said later that Kyiv would discuss prospects for talks on Saturday.

The assault was anticipated for weeks by the U.S. and Western allies and denied to be in the works just as long by Putin. He argued the West left him with no other choice by refusing to negotiate Russia's security demands.

In a window into how the increasingly isolated Putin views Ukraine and its leadership, he urged Ukraine's military to surrender, saying: "We would find it easier to agree with you than with that gang of drug addicts and neo-Nazis who have holed up in Kyiv and have taken the entire Ukrainian people hostage."

Putin has not disclosed his ultimate plans for Ukraine. Foreign Minister Sergey Lavrov gave a hint, saying, "We want to allow the Ukrainian people to determine its own fate." Putin spokesman Dmitry Peskov said Russia recognizes Zelenskyy as the president, but would not say how long the Russian military operation could last.

Ukrainians abruptly adjusted to life under fire, after Russian forces invaded the country from three sides as they massed an estimated 150,000 troops nearby.

Residents of a Kyiv apartment building woke to screaming, smoke and flying dust. What the mayor identified as Russian shelling tore off part of the building and ignited a fire.

For the hundreds who rallied in San Francisco, Thursday's demonstration outside City Hall included impassioned speeches calling for the world to help Ukraine. Palpable anger, sadness and fear gripped the crowd.

"What are you doing? What is this?" resident Yurii Zhyhanov asked Russian forces. Like countless other Ukrainians, he grabbed what belongings he could, took his mother, and fled, car alarms wailing behind him.

Elsewhere in Kyiv, the body of a dead soldier lay near an underpass. Fragments of a downed aircraft smoked amid the brick homes of a residential area. Black plastic was draped over body parts found beside them. People climbed out of bomb shelters, basements and subways to face another day of upheaval.

"We're all scared and worried. We don't know what to do then, what's going to happen in a few days," said Lucy Vashaka, 20, a worker at a small Kyiv hotel.

At the Pentagon, press secretary John Kirby said the U.S. believes the offensive, including its advance on Kiev, has gone more slowly than Moscow had planned, noting that Ukraine forces have been fighting back. But he also said the military campaign is in an early stage and circumstances can change rapidly.

The Biden administration said Friday that it would move to freeze the assets of Putin and Lavrov, following the European Union and Britain in directly sanctioning top Russian leadership.