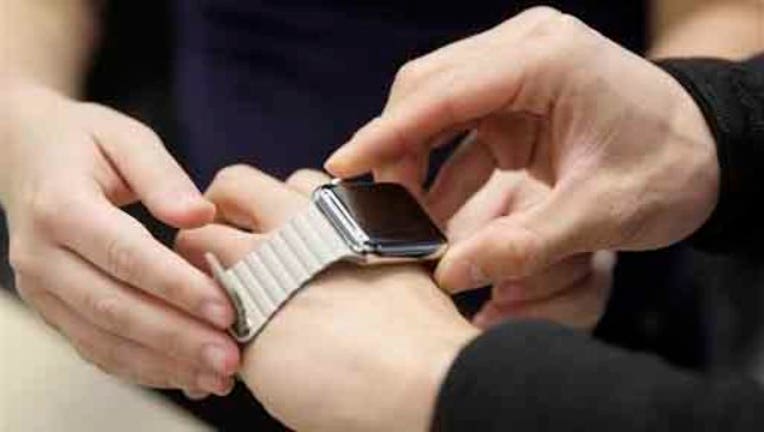 SAN FRANCISCO (AP) — Apple's stock slid sharply on Tuesday after the company reported strong iPhone sales but remained coy about the performance of its new smartwatch.

While not releasing specific figures for the Apple Watch, Apple reported total results for several products, including the watch, that suggest sales were lower than many Wall Street analysts expected. The company also issued a revenue forecast for the current quarter that suggested sales could fall below analysts' prior estimates.

Apple's latest financial report shows the iPhone is still the key engine of the company's success. The California tech giant said it sold more than 47.5 million iPhones during the three months ending in June, or 35 percent more than a year ago.

But top executives stood by their decision not to disclose results for the AppleWatch, saying the information could be used by competitors. Many analysts and investors see the watch as an important indicator of the company's ability to produce successful new products.

In one tantalizing clue, Apple reported $2.6 billion in revenue from the segment that includes the watch and several other products, or about $952 million more than the previous quarter, when the watch had not yet gone on sale. That's significantly less than the $1.8 billion in watch sales that analysts surveyed by FactSet were expecting.

Apple's stock fell nearly 6 percent in late trading, indicating investors weren't satisfied with the report. Apple also forecast that revenue for the quarter ending in September will fall between $49 billion and $51 billion, indicating total sales could fall below Wall Street estimates of $50.8 billion.

Chief Financial Officer Luca Maestri told The Associated Press that revenue from the watch amounted to "well over" that $952 million increase. He said the category also includes revenue from iPods and accessories, whose sales fell in the quarter.

"We beat our internal expectations" for the watch, Maestri said, adding that the number of watches sold in the first nine weeks was greater than the number of iPhones or iPads that the company sold in a comparable period after those products launched.

For the latest quarter, Apple said revenue from all sources grew 33 percent from last year to $49.6 billion in the April-June quarter, with the iPhone contributing $31.4 billion in sales. Net income climbed nearly 38 percent to $10.7 billion, while earnings amounted to $1.85 per share. That beat the estimates of Wall Street analysts surveyed by FactSet, who were expectingApple to report earnings of $1.81 per share on sales of $49.25 billion.

The iPhone's performance was especially notable because it's been nine months since Apple introduced its latest iPhone 6 and 6 Plus models. Consumer demand for new models usually wanes as time passes, but Apple's sales are continuing to grow faster than they did in a comparable period after the iPhone 5 went on the market in 2012.

Apple got a big boost from new markets like China, which contributed more than a quarter of the company's revenue, or $13.2 billion. China sales more than doubled from a year ago. Analysts say the company is also benefiting from its decision to offer bigger screens with the iPhone 6 and 6 Plus, which is helping to lure consumers away from competing phone-makers who started selling bigger-screen devices a few years earlier.

Even so, Apple may have trouble sustaining its recent growth. In the coming months, it will face more difficult comparisons against the surge in sales that followed the iPhone 6 launch last September. But analysts say the company should benefit from the size of its user base: Hundreds of millions of people own older iPhones and are expected to buy new ones when their two-year wireless contracts come up for renewal.

Meanwhile, analysts and investors were eager to learn more about the AppleWatch, which went on sale in April. While not expected to be an important revenue source now, the watch has symbolic importance as the first new product category that Apple has launched since the 2011 death of founder and iconic CEO Steve Jobs.

"When you look at the next big wave of innovation, in coming years, it's not going to come from smartphones," said analyst Angelo Zino of S&P Capital Markets, who said phones are already becoming "commodity" items, even withApple dominating the high end of that market. "So a lot of people want to see ifApple can roll out a new product that's very successful and innovative."

While Apple executives say demand for the watch has been strong, the absence of official numbers has left analysts to offer estimates ranging from rosy to lackluster. Maestri acknowledged that Apple has released detailed sales figures for other products, but he said the company wanted "to be careful" with information about the watch, to avoid tipping competitors as Apple learns more about consumer demand for a new product.

"We know that, for us to be successful, we need to innovate all the time," he added. "But when you look at what we've launched in the last 12 months, I think you can conclude that we're in great shape from innovation standpoint."

The FactSet survey found Wall Street analysts expected, on average, sales of 4 million watches in the quarter that ended in June. Bernstein Research analyst Toni Sacconaghi estimated in a report last week that Apple would sell 3 million watches, at an average price of $550, producing about $1.65 billion in revenue.

The watch is "an important gauge of Apple's ability to launch a new product under the leadership of Tim Cook," Sacconaghi wrote.