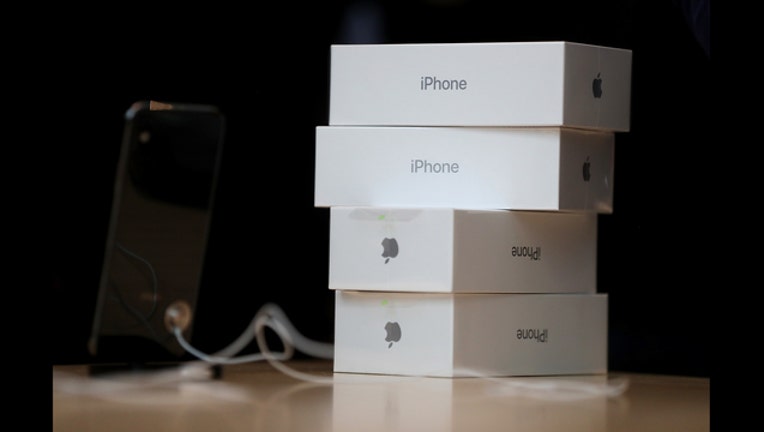 Boxes of the new iPhone X sit on a table at an Apple Store on November 3, 2017 in Palo Alto, California. The highly anticipated iPhone X went on sale around the world Nov. 3, 2017. (Photo by Justin Sullivan/Getty Images)

The allegations were in a lawsuit filed Thursday in Chicago federal court on behalf of five iPhone owners from Illinois, Ohio, Indiana and North Carolina, all of whom say they never would have bought new iPhones had Apple told them that simply replacing the batteries would have sped up their old ones. The suit alleges Apple violated consumer fraud laws.

A similar lawsuit was filed Thursday in Los Angeles. Both suits came a day after Apple confirmed what high-tech sleuths outside the company already observed: The company had deployed software to slow some phones. Apple said it was intended as a fix to deal with degraded lithium-ion batteries that could otherwise suddenly die.

"Our goal is to deliver the best experience for customers, which includes overall performance and prolonging the life of their devices," an Apple statement said. It said it released the fix for iPhone 6, iPhone 6s and iPhone SE and later extended it to iPhone 7. Apple didn't respond to a message Friday seeking comment.

The Chicago lawsuit suggests Apple's motive may have been sinister, though it offers no evidence in the filing.

"Apple's decision to purposefully ... throttle down these devices," it says, "was undertaken to fraudulently induce consumers to purchase the latest" iPhone.

Plaintiff Kirk Pedelty, of North Carolina, contacted Apple as his frustration grew. However, the lawsuit says: "Nobody from Apple customer support suggested that he replace his battery to improve the performance of his iPhone. ... Frustrated by slowdowns and intermittent shutdowns of his iPhone 7, Pedelty purchased an iPhone 8."

Creative Strategies analyst Carolina Milanesi said she believes the tech giant was seeking to help consumers extend the lives of the older phones -- though it would have been better to disclose what it was doing and why right away.

"Even if you are trying to do something good for your customers, it is going to be perceived as you are sneaking around behind their backs if you don't tell them about it first," she said.
------
AP writer Michael Liedtke in San Francisco contributed to this report.