The NFL, Pepsi and Roc Nation announced Thursday that the five music icons will perform on Feb. 13 at SoFi Stadium in Inglewood, California. Dre, Snoop Dogg and Lamar are Southern California natives.

Dre emerged from the West Coast gangster rap scene alongside Eazy-E and Ice Cube to help form the group N.W.A., which made a major mark in the hip-hop culture and music industry with controversial lyrics in the late 1980s. Dre is responsible for bringing forth rap stars such as Snoop Dogg, Eminem, 50 Cent and Lamar. Dre also produced Blige's No. 1 hit song "Family Affair."

"The opportunity to perform at the Super Bowl Halftime show, and to do it in my own backyard, will be one of the biggest thrills of my career," Dre said in a statement. The seven-time Grammy winner added that their halftime performance will be an "unforgettable cultural moment." 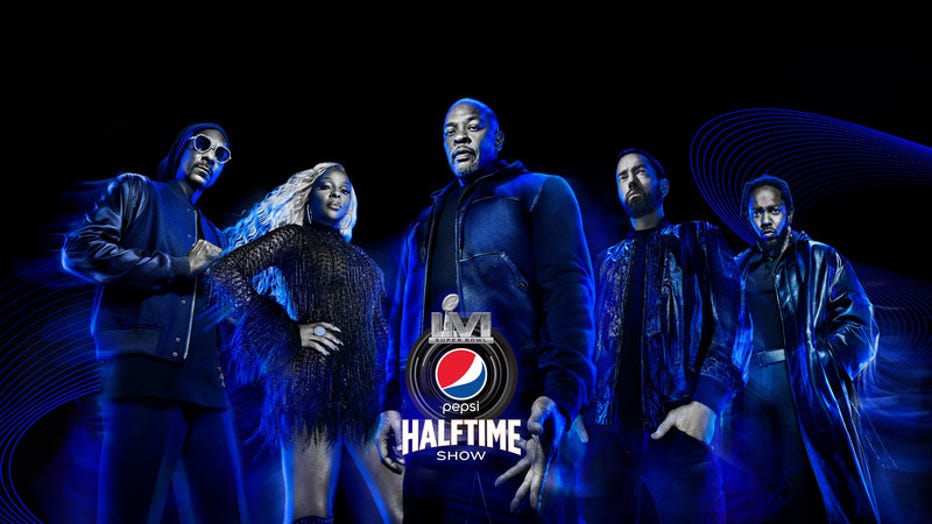 The Super Bowl returns to the Los Angeles area for the first time since 1993. It’s the third year of collaboration between the NFL, Pepsi and Roc Nation.

Roc Nation and Emmy-nominated producer Jesse Collins will serve as co-producers of the halftime show. The game and halftime show will air live on NBC.

The five music artists have a combined 44 Grammys. Eminem has the most with 15.

Roc Nation founder Jay-Z said in a statement that their show will be "history in the making."

NFL and Pepsi will join together to support the launch of Regional School #1, a magnet high school in south Los Angeles. It’s set to open for students next fall as part of the Los Angeles Unified School District.

The high school is based on the USC Iovine and Young Academy, a program founded by Jimmy Iovine and Andre "Dr. Dre" Young. It will offer an educational model focused on the theme of integrated design, technology and entrepreneurship.

"This effort will help develop and inspire the next generation of entrepreneurs and innovators," said Megan K. Reilly, the LA Unified Interim Superintendent. "We are excited about the additional opportunities this partnership will bring to our students."