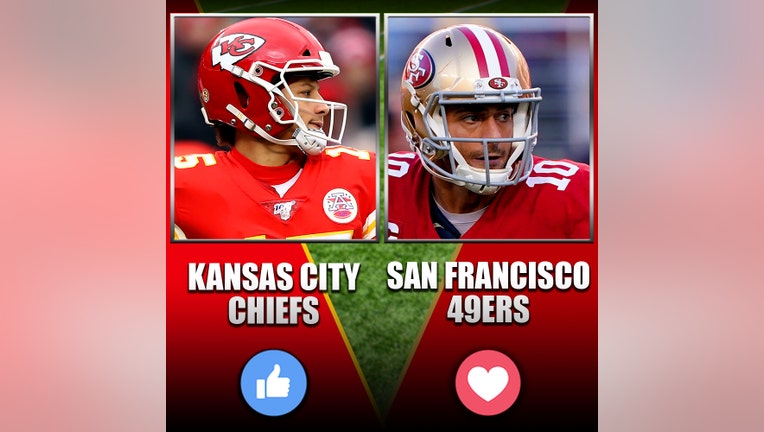 The Kansas City chiefs will play the San Francisco 49ers on Feb. 2 in the Super Bowl.

LAS VEGAS -  Even the bookies are having a problem figuring out a favorite in the Super Bowl.

The combination of an attractive matchup, close odds and the spread of legalized sports betting means hundreds of millions of dollars will exchange hands over the next two weeks.

Bettors at the Westgate Las Vegas Superbook got an early start after they were offered the pick 'em odds at halftime of the NFC championship game. Oddsmaker Jay Kornegay said about 80 percent of the early money was on the Chiefs and the line moved to Chiefs minus-1.

Odds and point spreads can fluctuate up until the kickoff Feb. 2 in Miami, largely because of heavy bets on one side or the other.

At the new Circa sports books, the game was pick 'em with a 52 total to open. Sports book director Matthew Metcalf tweeted that bettors could bet up to $100,000 a side on Sunday with limits of $500,000 a side beginning Tuesday morning.

Most books limit bets early to see if the point spread moves while being tested by so-called sharps.

Legal betting in Nevada's 200 sports books was down last year at $145.9 million after setting a record the year before with $158.6 million in bets. A big percentage of Super Bowl betting is in so-called prop bets, which have become increasingly popular as they multiplied in recent years.

Books will begin releasing hundreds of different prop bets during the week, from who will win the opening coin flip to how many penalties each team will have.

Kornegay said he expects a new record to be set in Nevada on the game, largely driven by a good economy. Bets are now legal in 13 other states, too, though not in the home states of either team or in Florida.