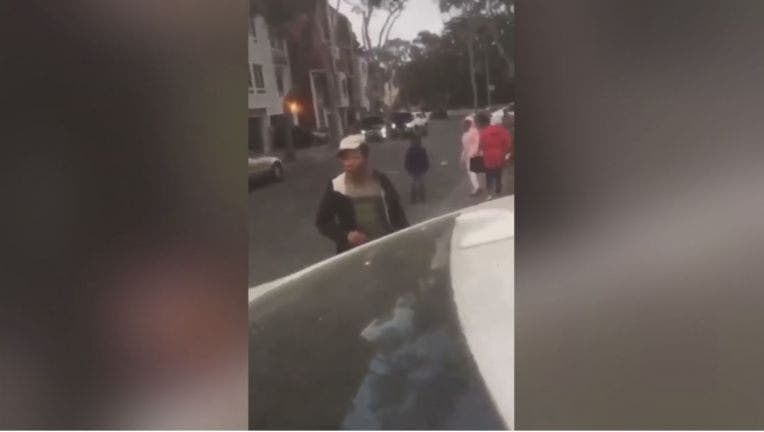 Supervisor Gordon Mar initially called for the data back in July 2019, amid what he said were growing incidents in hate motivated crimes, particularly property crimes targeting Chinese residents and businesses.

The passing of Mar's Crime Victim Data Disclosure Ordinance comes just a day after police said they were investigating a viral video shot in San Francisco's Bayview neighborhood, in which suspects appear to rob an elderly Asian man of the recyclables he was collecting, as a crowd of onlookers laugh and taunt the victim. That victim was identified by police on Wednesday.

Police haven't revealed how old the victim is or his name, but said the case remains under investigation.

Police also said a second video has surfaced of the robbery, showing the victim talking to two private security officers. Officers are in touch with the representatives of the security company that patrols the public housing in the area, according to police.

"The shocking and racially-fueled attack of an older Chinese man collecting recyclables is the latest in a continual series of high-profile crime incidents targeting older Chinese community members in Chinatown, Southeast neighborhoods and the Sunset District," he said.

Mar's legislation will require police to issue quarterly reports on the aggregated demographic data of crime victims, like their age, race and gender. Police would also be required to report motivating factors for 15 different types of serious crimes, including hate crimes.

The legislation does not require police to gather any additional data, but simply to report available data that is already being collected.

During their meeting, the Board of Supervisors also unanimously passed Supervisor Catherine Stefani's ordinance to amend the city's police code, requiring officers to obtain gun violence restraining orders for individuals in certain circumstances, barring them access to firearms.

Referring to the October 2019 shooting death of 21-year-old Maria Villagomez in the city's Merced Manor area, at the hands of her boyfriend, Stefani said, "The people around this individual knew he was unstable and dangerous, but they did not have any tool to successfully intervene. This ordinance would give them that tool."

Supervisors also approved the city's lease of 888 Post St., the future site of a 75-bed Navigation Center for young people between 18 and 24 years old experiencing homelessness.

The site would be the city's first Navigation Center for that age group, providing shelter for people while allowing partners, pets and possessions, with 24/7 access, along with services.

"There are far too many young people sleeping on our streets every night, and this proposed shelter at 888 Post will help us provide much needed shelter and services to those who need it," Mayor London Breed said in a statement.

"By creating a streamlined process for nonprofit activities in vacant properties, this new low-barrier, temporary-use permit will help mitigate the presence of neighborhood blight, promote art and cultural activities, and encourage greater economic activity along our commercial corridors that are deeply struggling with vacancies," she said.

Lastly, Supervisor Ahsha Safai introduced legislation, which he said was in response to the rise in vehicle sideshows on city streets.

"Through social media, and through organizing we've seen a major increase in sideshows," he said. "In particular, we'd like to see something that talks about naming these acts as a public nuisance."

If sideshows are deemed a public nuisance, Safai said, "the drivers, the spectators, everyone involved, we can not only seize their vehicles, but we can auction them and the city can take full ownership of the vehicles. I know it sounds extreme.

"Police in many ways are somewhat helpless; they can come and contain the area; they have the ability to take video. But the first and foremost concern is safety," he said. "This is a dangerous act. Spectators can die, people driving the car can die. And by the way, the only people who should be doing these types of acts in a car are full on stunt people, with the proper safety equipment and years and years of training."

On Sunday, police said they were seeking people involved in at least four separate sideshows throughout the city on Saturday night.

According to police, each sideshow attracted 50 to 100 vehicles, along with numerous spectators and bystanders. No injuries or collisions were reported in connection with the shows.