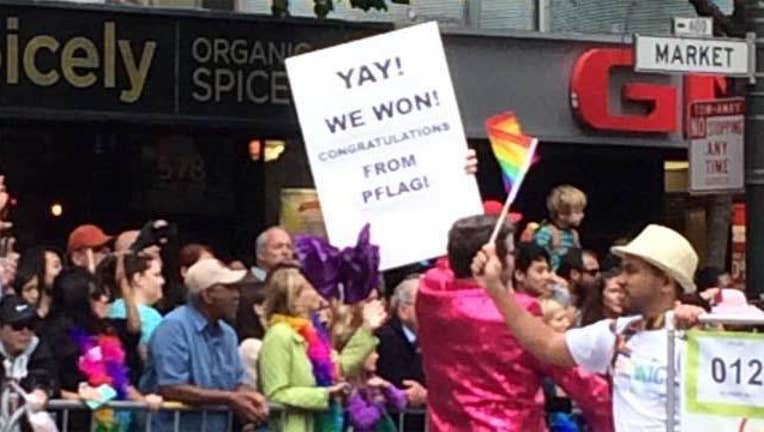 SAN FRANCISCO (AP) — Hundreds of thousands of people on Sunday packed gay pride events from Chicago to New York City, Seattle to San Francisco, with overall attendance expected in the millions for what amounted to a celebration of a freshly endorsed right to marry.

In San Francisco, a parade that at times resembled a rainbow-colored dance party snaked through downtown. Cheerleaders, dancers and proud families of lesbians and gays swooped up Market Street as spectators flocked 10 to 15 people deep along both sides.

There were "Hooray for Gay" and "Love Won" signs. There were rainbow flags and knee socks, umbrellas and tutus.

SF Pride Board President Gary Virginia said the exuberance was amplified given last week's U.S. Supreme Court ruling that same-sex couples can wed in all 50 states. Still, he said more needs to be done in housing and job discrimination in the United States and for lesbian, gay, bisexual and transgender people around the world.

"Today, we celebrate," Virginia said. "Tomorrow, we get back to work."

San Francisco organizers put the number of marchers at 26,000, while in New York City, organizers expected about 22,000 people.

New York Gov. Andrew Cuomo used his newly granted powers to officiate at the wedding ceremony of a same-sex couple in Manhattan. It was held in front of the Stonewall Inn, where in 1969 gay bar patrons stood up to a police raid, launching the modern gay rights movement.

Nikita Lowery, a 28-year-old resident of Chicago, said she decided to attend that city's parade for the first time this year. "I feel like it's a true celebration now," she said.

At gay pride parades in Paris and other cities outside the U.S. on Saturday, the Supreme Court's ruling was hailed by many as a watershed.

"Soon in all countries we will be able to marry," said Celine Schlewitz, a 25-year-old nurse taking part in the Paris parade. "Finally a freedom for everyone."

Street celebrations were boosted Saturday in Dublin, where Ireland mounted the biggest gay rights parade in the country's history. But in Turkey, police used water cannons to clear a rally Sunday in Istanbul. It wasn't clear why the police intervened in the peaceful rally. The crowd regrouped a few blocks away.

In San Francisco, police say a bystander was shot at a gay pride event at the city's civic center Saturday when several men got into an argument unrelated to the celebration. A 64-year-old man was shot in the arm, and he is expected to survive, said Officer Carlos Manfredi on Sunday.

Dykes on Bikes traditionally kicks off the city's Pride parade. Riders revved their engines for five minutes and received a sprinkling of silver glitter from a bystander before setting off at 10:30 a.m. to hoots and cheers and unbridled applause.

Corporate sponsors included home-sharing platform Airbnb, which had a float with dancers shimmying on a bed and in a bathtub. Apple sent a large contingent of people clad in white t-shirts.

Kelsey Brosler, a 17-year-old high school student from Concord, Calif., and mother Carlene Brosler, 45, were among the spectators. The younger Brosler, who recently came out as pansexual, said the Supreme Court decision was a long time coming.

"Definitely the fight is not over yet. I know everyone here is still fighting," Kelsey said. "Even though it's a very happy event, there's still more to come."