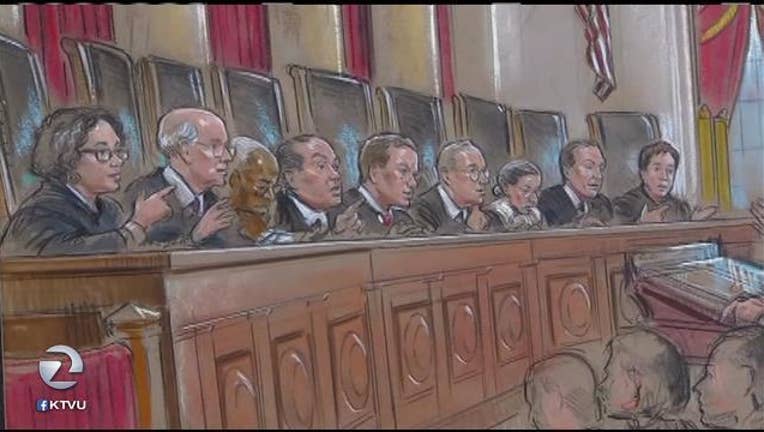 "The excitement is already in the community," activist John Lewis told KTVU, "and each day, it's going to build stronger."

Lewis and husband Stuart Gaffney are leaders in the organization, Marriage Equality USA, and were plaintiffs in the legal fight challenging voter-approved Proposition 8 in California.

Now they're bracing for a decision that could invalidate gay marriage bans in thirteen states,

"It's that basic principle that all Americans should have that freedom," explained Lewis," to fulfill that dream, to marry the person that they love."

Thirty seven states now permit same-sex marriage, while 13 do not.

"Right now this country is divided legally, into marriage "haves" and "have nots"" noted Gaffney, "and that's what we need the Supreme Court to decide once and for all."

Plans are already made for a huge rally in the Castro District, win or lose.

"No matter what, it's coming down during Pride Week, rally organizer Joanie Juster told KTVU, "so we don't know what to expect."

The timing is akin to 2013, when the Supreme Court struck down a key provision of the federal Defense of Marriage Act, and unraveled Prop 8.

As California prepared to perform same-sex nuptials again, tens of thousands of people were already arriving for Gay Pride festivities, and the crowds hit record levels, topping 1 million on the day of the parade.

"Most of the visitors who come into town come at midweek," noted Juster, "so if the ruling comes on Wednesday like it did last time, the rally might not be just a local crowd. It could be quite an event."

The justices heard arguments in April challenging the marriage bans in Michigan, Ohio, Kentucky, and Tennessee. Those states claim it is a state's right to define marriage as it sees fit.

Some of the couples that are suing married legally in other states, then relocated, and found they had no legal rights or recognition.

"Can that state say 'you're no longer married, we're taking away your marriage' "posed John Lewis, "that sadly is the truth."

Lewis and Gaffney have been together almost thirty years. They were among the first gay couples to marry at San Francisco City Hall in 2004, then married again in 2008, as Prop 8 made its way through the courts.

Legal observers say, no matter what side the court takes on outlawing bans, gay marriage will likely remain intact in the states that already have it.

Rallies are planned across the country. The Castro rally is slated for 6pm on the day of the decision, at the corner of 18th Street and Castro. For updates, see facebook.com/dayofdecisionsf.