A Vallejo business owner, who's store was the victim of arson, says she's determined to reopen. Surveillance camera footage caught a man in the act and he was arrested within minutes.

VALLEJO, Calif. - Fire investigators in Vallejo said a downtown business owner sprang into action after receiving an alert from her security camera showing someone lighting her storefront on fire.

The fire broke out shortly before 3:30 a.m. on Tuesday at Anchor Pantry located in the 600 block of Marin Street. 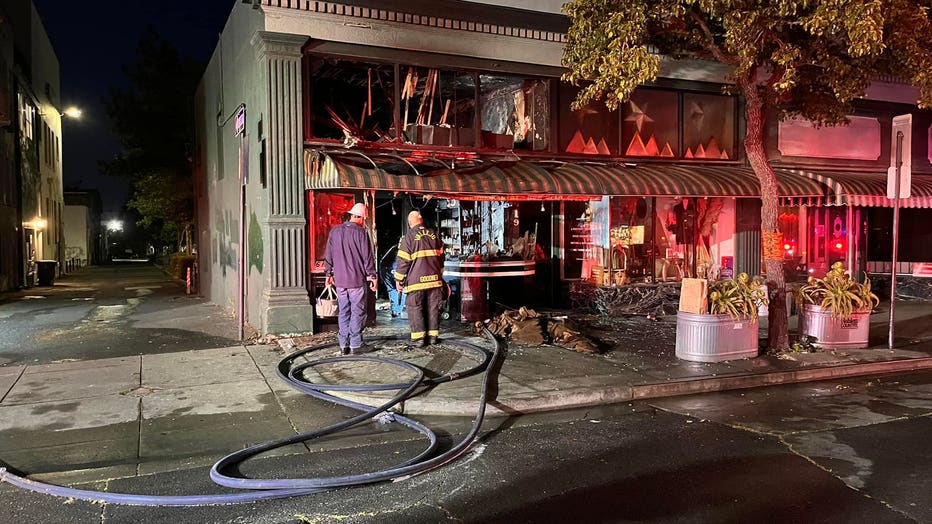 A fire at Anchor Pantry in Vallejo on Tuesday, May 17, 2022. Investigators said the business owner managed to prevent further damage after seeing someone on his surveillance cameras setting the storefront on fire.

Investigators said the owner of the store managed to get to the property just as police were arriving because she received an alert on her phone linked to her security system. Surveillance cameras showed someone was at the business trying to start a fire, investigators said.

The owner and police took quick action to try and put out the flames. Vallejo fire arrived a short time later.

"(She) and VPD were on scene using fire extinguishers to keep the fire in check. The fire extension at that time was just the storefront itself," said Vallejo Fire Department Public Information Officer Kevin Brown. "Due to their quick actions and due to the quick actions of the first arriving fire company, we were able to limit the fire to just that initial storefront," Brown added.

Police arrested Xavier Williams, 32, just a few blocks away from the business. Investigators said the person seen in the security footage was the suspected arsonist.

While the fire damage could have been much worse without the quick intervention of the store owner and police, the business did sustain heavy smoke throughout the property, and fire officials said that it would require extensive clean-up and remodel.

On Tuesday morning, Anchor Pantry, which specialized in locally curated gourmet goods and spices, took to social media and shared a photo of the fire damage, with smoke coming from the business and fire crews on scene. "Arsonist tried to steal my dream last night, he was caught and arrested," the post read. "A little comfort but it won’t bring the store back."

Organizers of the fundraising campaign said, "... it's a huge loss for Vallejo. Since opening a little over a year ago, Jessica and Frank have been invaluable members of our downtown community, bringing good food and good will to our town. To lose them is unthinkable."

The GoFundMe called on the community for its support.

"Though they have insurance, it will take a while to get them back on their feet and into a new space, and they will need help with their day-to-day expenses, as this is their livelihood," organizers said.

As of Tuesday morning, the campaign had already raised more than $16,000.

And in the midst of disaster, the store owner said he was filled with gratitude. "I love you all for your outpouring of love and support!!!! I am very lucky even though this is very unfortunate," Anchor Pantry said. "Thank you friends, neighbors and family."

A Vallejo business owner managed to intervene, after seeing a suspect light the front of the business on fire on his security cameras, according to investigators.