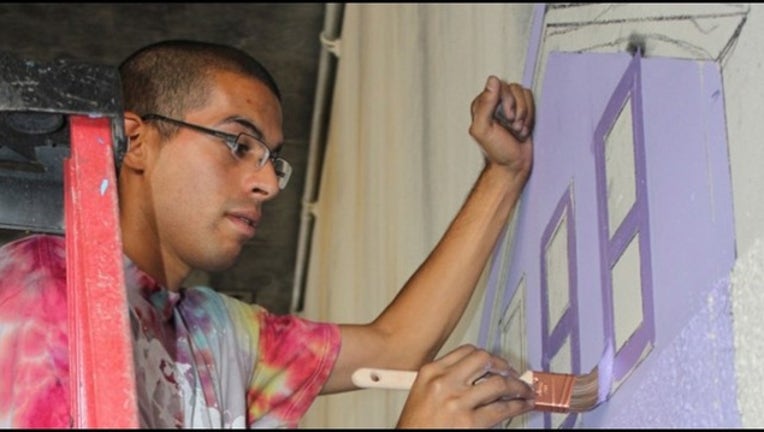 Oakland muralist Antonio Ramos was working on a piece he was commissioned for when he was shot and killed in 2015. The suspect in his killing pleaded no contest to murder.

OAKLAND (BCN)-- A reputed gang associate pleaded no contest Monday to first-degree murder for the fatal shooting of a mural artist in Oakland three years ago.

Marquise Holloway, 23, faces a term of 25 years to life in state prison when Alameda County Superior Court Judge Morris Jacobson sentences him on Oct. 5 for the shooting death of 27-year-old Antonio Ramos of Emeryville in the 3500 block of West Street in Oakland at about 10:30 a.m. on Sept. 29,
2015.

Ramos was shot while he was working on a mural underneath an Interstate Highway 580 overpass that was part of the Oakland Super Heroes Mural Project, a collaboration between artists and local students.

Oakland police said they believe the gun used in the killing of Ramos was stolen earlier in September 2015 from a U.S. Immigration and Customs Enforcement agent in San Francisco.

Oakland police Officer Jimmy Ngo wrote in a probable cause statement that after Holloway was arrested in November 2015 he admitted that he shot Ramos but claimed it was an accident.

Oakland police Lt. Roland Holmgren said in November 2015 that Holloway is associated with a West Oakland gang called Ghost Town and described him as "very much a threat to the community" because police believe he committed a number of bank robberies.

But as part of Holloway's plea agreement, the Alameda County District Attorney's Office agreed to dismiss the special circumstance allegation and the robbery counts.

Holloway would have faced life in prison without the possibility of parole if he had been convicted of murder with special circumstances.

Holloway shouted expletives and banged his head against a glass barrier when he was arraigned on Nov. 24, 2015, but was calm when he pleaded not guilty at a court appearance on June 6, 2016.

Holmgren said on Sept. 29, 2015, Ramos had taken a break from working on the mural and was taking pictures of his work to memorialize it to update the mural artists' website when Holloway came by and noticed Ramos' camera equipment, sparking a confrontation that ended