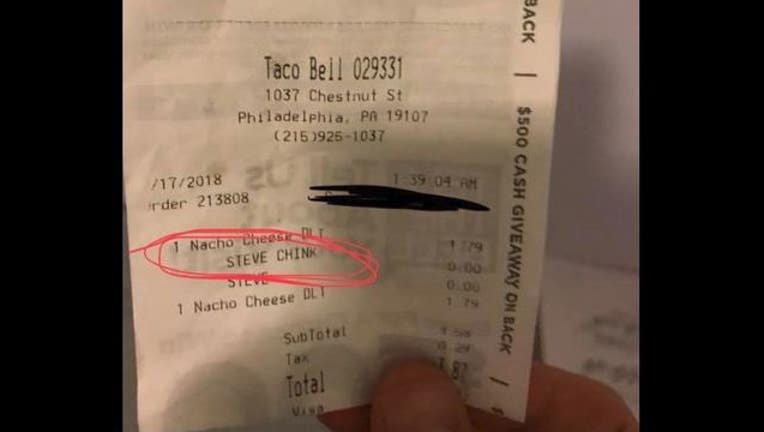 (FOX 11) - “Our interaction was very ordinary and cordial even until I saw my name on the receipt that read ‘STEVE CHINK,'” Lee wrote. “I was so infuriated that I couldn’t help but to confront the cashier. When I confronted him, he said that there are three Steve’s in the restaurant so he needed to differentiate. It made me even more upset that he was protecting his case rather than apologizing so I lashed out and told him that it is extremely disrespectful to use such a derogatory slur.”

Lee said, when he confronted the cashier about the receipt, he decided to let it pass after hearing his explanation and apology. He overheard a conversation between the cashier and other restaurant workers making fun of him.

A customer at a Taco Bell restaurant in Pennsylvania had an infuriating encounter with a cashier who allegedly berated him with a racial slur right on the receipt!

In Young Lee, a first-year Ph.D. student at Penn Medicine, went to a Taco Bell in Philadelphia, Pennsylvania on Saturday at around 1:30 a.m. after a night out with his friends.

According to Lee, he gave the cashier the fake name “Steve” to save them both the trouble of having to spell out his actual name.

However, he was shocked to discover later that the cashier referred to him as 'Steve Chink' in the printed receipt as shown in his Facebook post talking about what happened:

In the post Lee writes, the manager of the Taco Bell did apologize, but he also faulted Lee for being “disrespectful” and snatching the food out of the cashier’s hands after being called a “chink.”