TAMPA, Fla. - After a helicopter plunged into Hillsborough Bay off Davis Islands, the occupants were able to escape the aircraft – but it was the jet ski riders that lifted them out of the water. It turned out to be Buccaneers' backup quarterback, Blaine Gabbert, and his two brothers.

One of the chopper occupants was a man named Hunter Hupp, who was visiting from Philadelphia. The 28-year-old planned a helicopter tour as a Christmas gift for his parents, who live in North Carolina. But the scenic ride didn't go as planned.

While the chopper was falling from the sky, Gabbert was out in the bay with his two brothers, who just arrived in Tampa from St. Louis the day before. When the helicopter hit the water, the Buccaneer heard it.

"It almost looked like a crew boat that had broken up into four pieces. I saw yellow life jackets. We raced over there," he described Friday during a press conference. "The youngest kid had just come up, saying he was pinned in there." 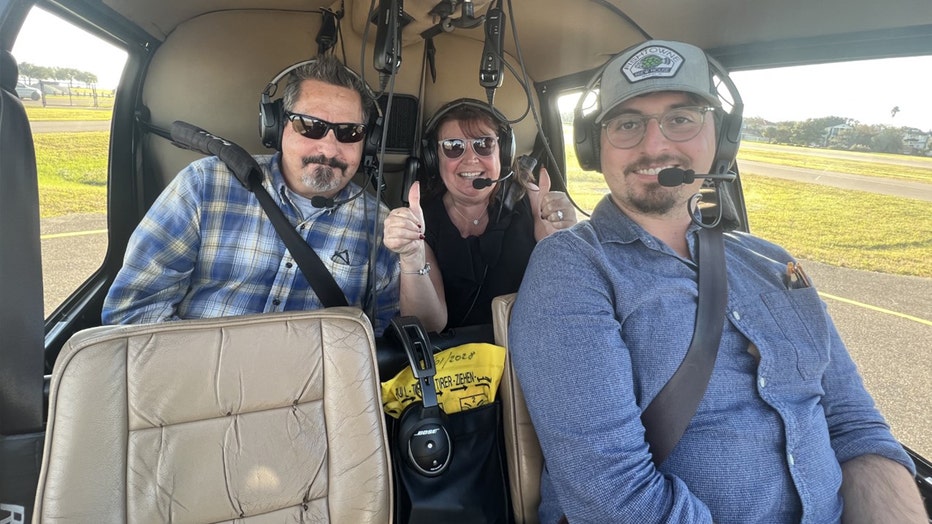 Photo of Hunter Hupp and his parents inside the helicopter before the tour began. (Photo provided by Hupp family)

The NFL player said he dialed 911 and tried to remain calm in front of the family, adding that the occupants were covered in oil.

"It was not a fun sight…[but] it all turned positive," Gabbert said. "They were healthy, scared, nervous. It was a pretty crappy situation that turned good. I was in the right place, the right time, I guess. The credit really goes out there to TPD and HCSO."

Hupp told FOX 13 they were returning to Peter O. Knight Airport at the conclusion of their one-hour tour.

"We had a beautiful flight… saw some manatees at the power plant," he recalled. "We could see the shore. I honestly thought I was videoing the touchdown, but unfortunately, I didn't get that." 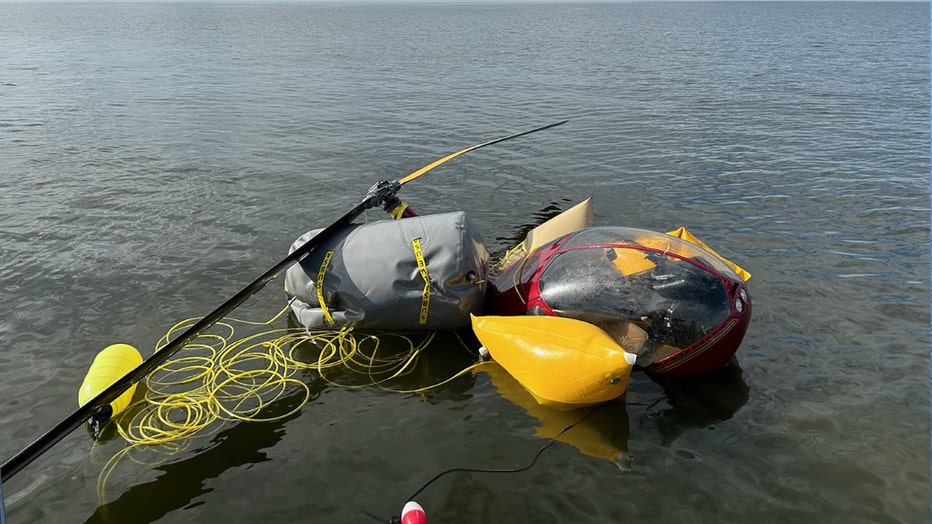 That's when he said they heard a loud banging noise.

"I was like, ‘Was that a bird we just hit?’" Hupp said he asked the pilot. "He had a very stern look on his face and he said, ‘Um, this doesn’t look too good.'"

Hupp said the pilot attempted to throttle back up, but the helicopter had no power.

"He said, ‘We’re about to make a water landing.' Everyone tried to remember where he pointed out where the life vests were — something you never think you're going to have to use," Hupp said.

Hupp described the frantic moments after the helicopter ended up in the bay, saying it tipped left and quickly began taking on water.

"Those things fill up quickly, let me tell you that," he described. "I thought we'd have a little bit more buoyant time."

Tampa police and fire rescue officials joined Tampa Bay Buccaneers' backup quarterback Blaine Gabbert to discuss Thursday afternoon's helicopter crash off Davis Islands, where Gabbert and his brothers on jet skis helped first responders rescue the four people from the helicopter and pull them out of the water.

His parents were the first ones to make it out of the aircraft, and Hupp said he was the last one to escape.

"At this point, the whole entire thing was submerged, I am fully underwater. It's one of those movie scenes where you take your last breath up in the little bubble that's left," he recalled. "I seriously thought that I was a goner." 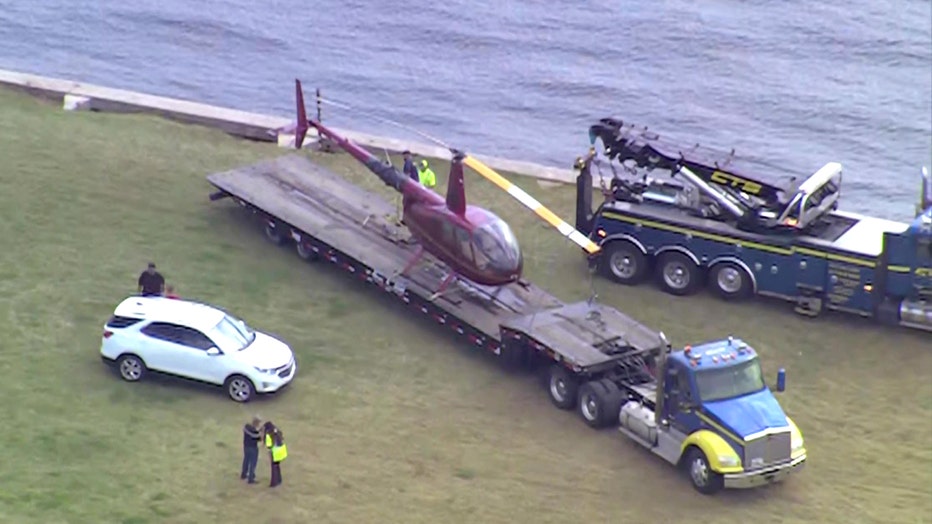 An aerial view of the helicopter on Friday, Dec. 30, after it was pulled from Hillsborough Bay.

He struggled to free himself, getting tangled in the headset cables and seatbelts.

Thankfully, Hupp, his parents, and the pilot all made it to land quickly after the crash.

"I count my lucky stars this morning," he told FOX 13 on Friday morning. "We all woke up. Today is the best day ever."

See crews pull a helicopter that crashed off Davis Islands Thursday from Hillsborough Bay and put it on a flatbed truck to be hauled away.

Hupp and his 59-year-old mother ended up on Gabbert's watercraft, while his 63-year-old dad climbed on the back of the second jet ski. During this time, the Tampa Police Department Marine Unit arrived and retrieved the pilot, a 33-year-old man, from the water.

The Gabbert brothers slowly brought them to shore.

"We had three people on the jet ski. I’m heavy. I tried to go fast," the Bucs player recalling, saying he had to tell Hupp's mother, "Ma’am you have to hang on." 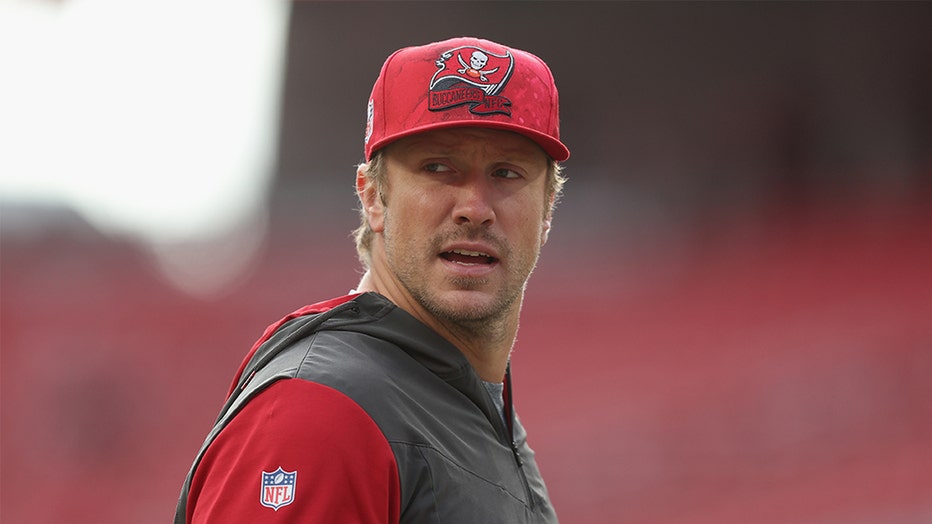 Blaine Gabbert #11 of the Tampa Bay Buccaneers warms up before the game against the San Francisco 49ers at Levi's Stadium on December 11, 2022 in Santa Clara, California. (Photo by Lachlan Cunningham/Getty Images)

Investigators said the chopper crashed about 300 feet from shore. NTSB and FAA are investigating the cause of the crash.

"We often say we cannot do our jobs well without our community, and we are safer together," said Tampa Police Interim Chief Lee Bercaw. "Yesterday, was an amazing example of teamwork. This is why this area is known as Champa Bay."

It wasn't until Friday morning that Hupp learned Gabbert was one of the rescuers. He said a FOX Sports reporter called him for an interview and delivered the news.

"He was very humble the whole time. He was super nice," Hupp described. "I think my mom climbed on the back of his. He had two buddies out that and my dad on the back of theirs. Seeing three grown men on a jet ski was kind of funny  – after the fact."

Chopper crashes off of Davis Islands

The Tampa Police Department is investigating after a helicopter with four people on board crashed off Davis Islands Thursday afternoon.

For Hupp, he vowed he will never ride a helicopter again.

Gabbert said he was just trying to do the right thing. At the conclusion of Friday's press conference, Bercaw made him an honorary member of their marine patrol and presented him with an official Tampa police hat. 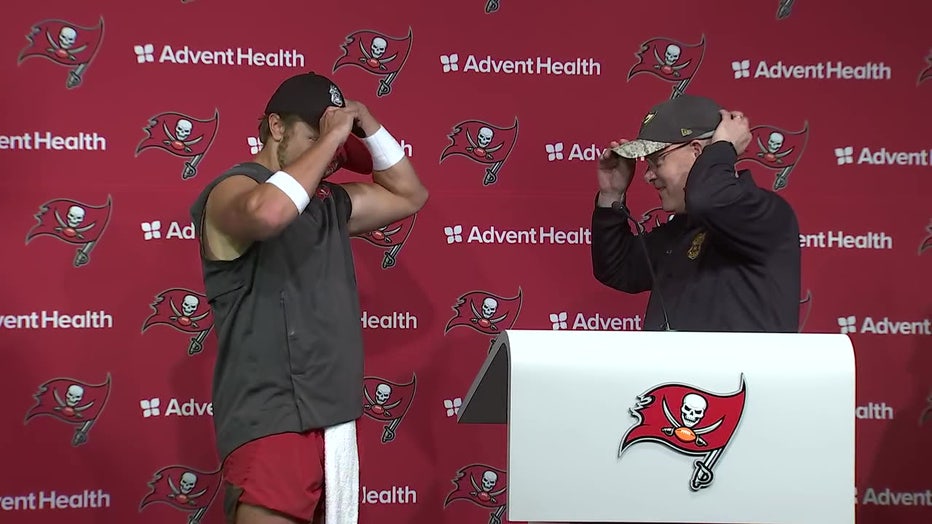 Blaine Gabbert tries on his new TPD marine unit hat, while the interim chief puts on a Bucs' hat.