NEW YORK - It was a moving demonstration of gratitude that drew tears and cheers. Video of a little girl, who finished her cancer treatment has gone viral, as she’s seen hugging and re-hugging and holding on tightly to a woman who helped elevate the child’s spirits during years of treatment for leukemia. 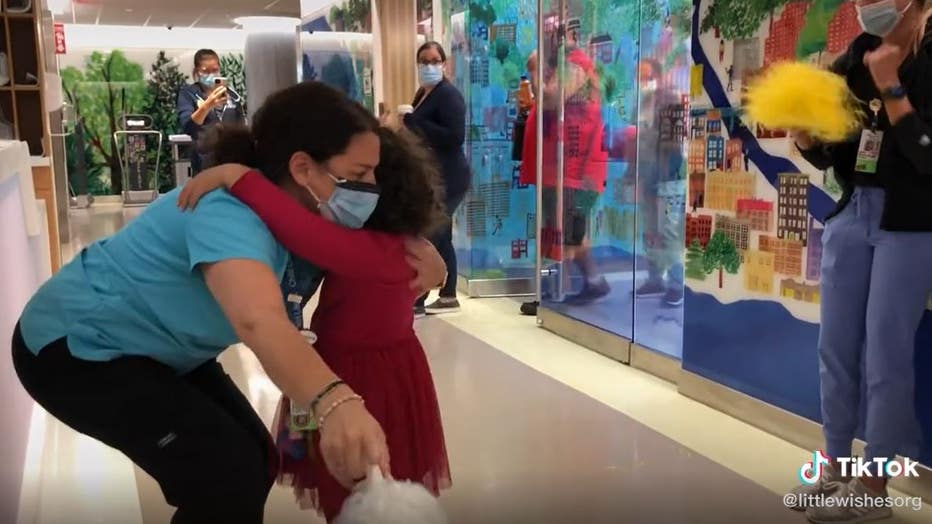 Viral video shows emotional moment as 5-year-old is celebrated at the end of her cancer treatment.  (Little Wishes/www.littlewishes.org)

"After two long years of cancer treatment at the Children's Hospital at Montefiore, little Amelia is done!" hospital staff wrote on Facebook on August 26, sharing video showing the emotional moment as 5-year-old Amelia was being celebrated at the hospital located in Bronx, New York.

The child was seen running out to a hospital hallway and into the arms of Talia Haviv, a certified child life specialist, who was part of a team who helped care for the little girl during treatment. When Amelia refused to let go, Haviv went on to pick her up, bring her toward the cheers, and spun her around in celebration. 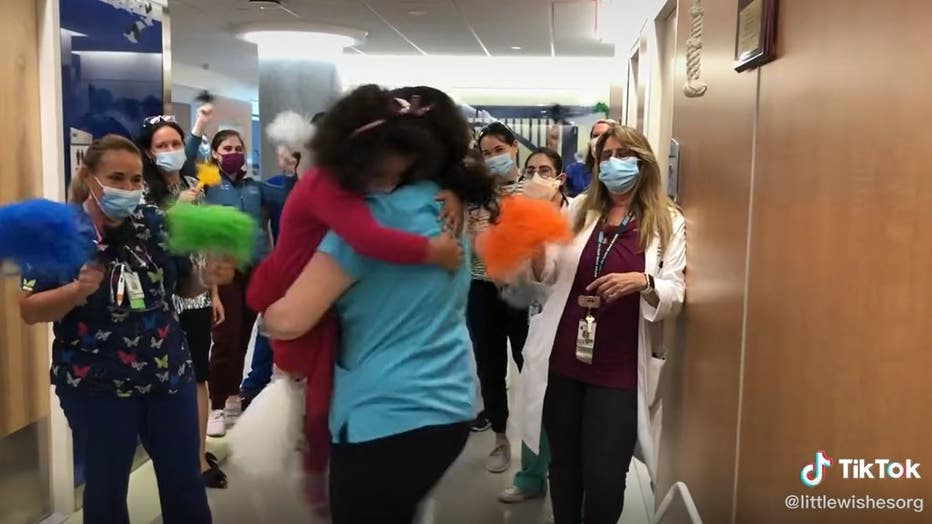 Haviv, whose work involved guiding children like Amelia through difficult procedures, has gone the extra mile as part of a Bay Area-based program known as Little Wishes (LW). The group was founded by pediatric registered nurses at California Pacific Medical Center (CPMC) in San Francisco.

Since 2003, Little Wishes has sought to help bring smiles to gravely ill, hospitalized children by granting them wishes. As part of the program, the wishes are ongoing, allowing the young patients to make a new one every 14 days, Laura Euphrat, president and co-founder of the organization told KTVU.

Through the group, medical staff at hospitals volunteer their time to cheer up pediatric patients with gifts that feed their interests and desires. As part of that effort, the non-profit also sought to bring hope and joy not only to sick children but their families and the hospital staff as well.

"Little Wishes has helped seriously ill, hospitalized children from losing their identity to illness by tapping into their passions," the group said on its website, adding, "Each wish, no matter how simple – a princess dress, Spiderman figurine, book or a musical instrument – makes a huge difference by providing a welcome diversion and easing the discomfort of long hospitalizations and painful treatments."

Euphrat said that the idea was born out of the memory of an 8-year-old boy named Josh, a patient at California Pacific Medical Center who battled an extremely aggressive liver cancer. "I was his nurse when he passed away and vowed to have LW in his memory," Euphrat shared.

So through that desire to remember the young warrior named Josh, Little Wishes has helped tens of thousands of other young warriors. "...we have had almost 19,000 little wishes come true in his memory," Euphrat said.

She also celebrated the fact that the group has greatly expanded in this region and beyond. Locally, in addition to CPMC Sutter Health, where it was founded and where Euphrat still worked as a pediatric oncology RN, it’s been adopted at UCSF Benioff Children's Hospital, Lucile Packard Children's Hospital Stanford, Kaiser Permanente Santa Clara Medical Center, John Muir Health in Walnut Creek, and Sutter Medical Center, Sacramento.

Little Wishes has reached 24 hospitals in more than a dozen states, with a new program about to launch in Hawaii.

"A few years ago, we expanded to NYC- A dream come true for me," Euphrat noted, as she referenced the moving video of sweet Amelia at The Children's Hospital at Montefiore. "I cried tears of joy knowing that LW was coast to coast."

In addition to the wishes, young children in the program have also received a big, colorful send away party at the end of their treatment.

"We provide decorations, and fanfare (sometimes even confetti gun salutes) and we provide memory keepsakes for the child to hold on to and remember their journey and how strong they are," Euphrat shared.

For Amelia, those keepsakes to remind her of that strength she embodied included a memory locket, a memory book, as well a Peppa Pig dollhouse, a special request from the child herself.

But perhaps, the best gift of all was the love and support she received from Haviv and the others who were cheering for Amelia through her arduous two year battle, granting her little wishes along the way and hoping and rallying for the greatest wish of all – her healing and recovery. 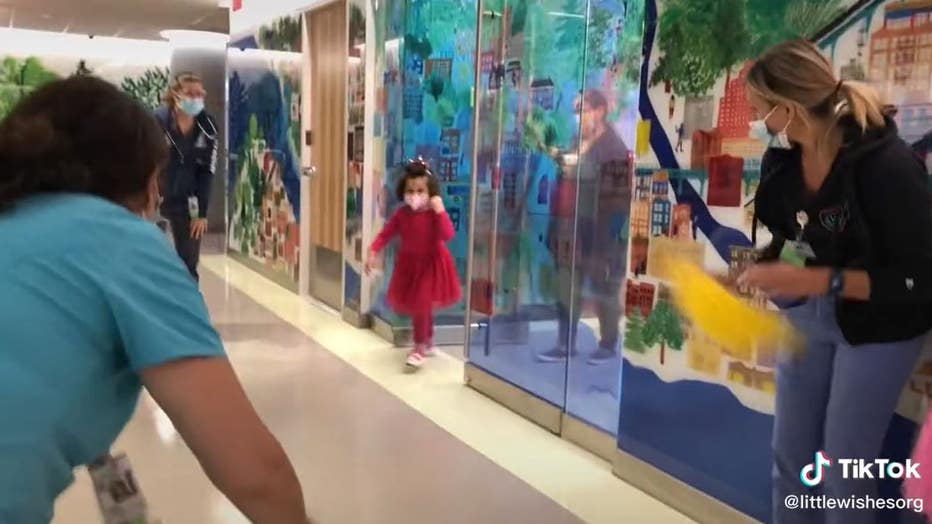 Video posted on August 26, 2021, shows emotional celebration to mark the end of treatment for for 5-year-old Amelia at The Children's Hospital at Montefiore, in Bronx, New York.  (Little Wishes/www.littlewishes.org)