Chloe Newman arrived at Shriners Hospitals for Children in Springfield with hundreds of dolls to be donated.

SPRINGFIELD, Mass. - A children’s hospital in Massachusetts recently received more than 600 donated Barbie dolls with a prosthetic limb thanks to the efforts of an 18-year-old woman who also wears a prosthetic leg.

Chloe Newman has been a patient at Shriners Hospitals for Children since she was born due to a rare condition called Amniotic Band Syndrome that cut the blood flow to her leg during her mother’s pregnancy, according to MassLive.

The 18-year-old came across Mattel’s line of 12 Barbie Fashionistas dolls with all different body types, skin tones and hairstyles — including one with a prosthetic leg, called Barbie Fashionistas Doll #121, said Jennifer Tross, director of marketing and communications for Shriners Hospitals for Children in Springfield.

Newman began trying to collect the dolls to donate them to patients at the hospital’s Pediatric Orthotic and Prosthetic Services unit, where she herself has been a patient, according to MassLive. The POPS unit creates personalized prosthetic devices for kids living with missing limbs and other orthopedic conditions, tailored to the needs of each growing child. 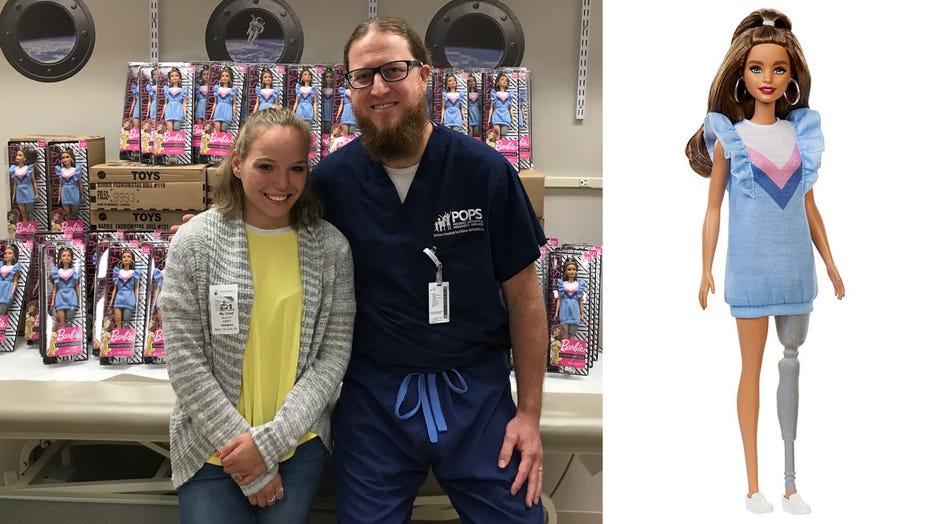 She and her mother, Cindy Newman, reached out to friends and family on social media for help finding the dolls.

“If you’re out shopping if you see five [dolls], get them and I’ll reimburse you,” Cindy Newman wrote on her Facebook page, according to MassLive.

The family soon hit their target of 100 Barbie dolls, and packages began piling up outside of their door, the website reported.

On Monday, Chloe Newman arrived at the Springfield hospital with a van full of more than 420 dolls to be donated, Tross said.

Tross said the Newman family reached out to Mattel about the donation, which offered to donate an additional 200 more to the hospital.

Shriners Hospitals for Children has 22 locations, 17 of which have Pediatric Orthotic and Prosthetic Services departments. Tross said the Springfield hospital plans to share the donated dolls with its patients across North America.

Chloe told MassLive that she hopes the dolls will help prevent children from having any negative feelings about themselves and to view their prosthetic leg as beautiful.