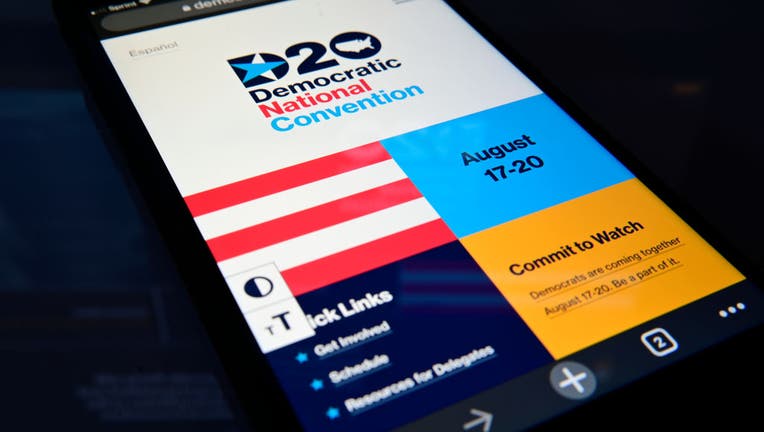 The mobile front page of the Democratic Convention website is displayed the screen of a phone, photographed on August 12, 2020 in Philadelphia, PA, USA. (Photo by Bastiaan Slabbers/NurPhoto via Getty Images)

NEW YORK - Preliminary estimates show television viewership for the first night of the Democrats' virtual convention was sharply down compared to the opening of Hillary Clinton's nominating party four years ago.

The Biden campaign claimed their event was a hit online, with campaign spokesman T.J. Ducklo saying an additional 10 million people streamed live video of the convention on various platforms. More watched video highlights of the event, he said. Those numbers could not immediately be independently verified.

The event, a slickly-produced, two-hour video by the Democrats that combined speeches from the likes of Michelle Obama and Bernie Sanders, music and taped testimonials from different Americans, contrasted with the traditional conventions that bring delegates together.

The left-leaning MSNBC, where Rachel Maddow, Joy Reid and Nicolle Wallace were anchors, led the way Monday with 5.1 million viewers, up from four years ago. CNN had 4.78 million. Unlike the broadcasters, the two cable networks ran the Democrats' production nearly in its entirety.

Fox News Channel's audience was unimpressed; the 2.1 million viewers it reached for its hour of convention coverage compared poorly with the 3.4 million viewers that time slot occupant Laura Ingraham had on an average July day. Earlier in the evening, Fox kept to its regular lineup with Tucker Carlson and Sean Hannity criticizing the Biden campaign, instead of showing news coverage of the convention.

Veteran television producer Don Mischer, whose credits include the Oscars, the Emmys and the 2004 Democratic national convention, said that while the convention's first night was well-produced, it suffered from the lack of a live audience.

While Obama “hit a home run” with her speech, “had that been done in front of the crowd, with the crowd's emotion getting stronger and stronger as she went through that speech, by the time she got to the end, there would have been a rush of palpable emotion that would have resonated with people many times greater than what came across,” he said.

Democrats — along with Republicans who will hold their convention next week — were forced into the new format due to the ongoing coronavirus pandemic.