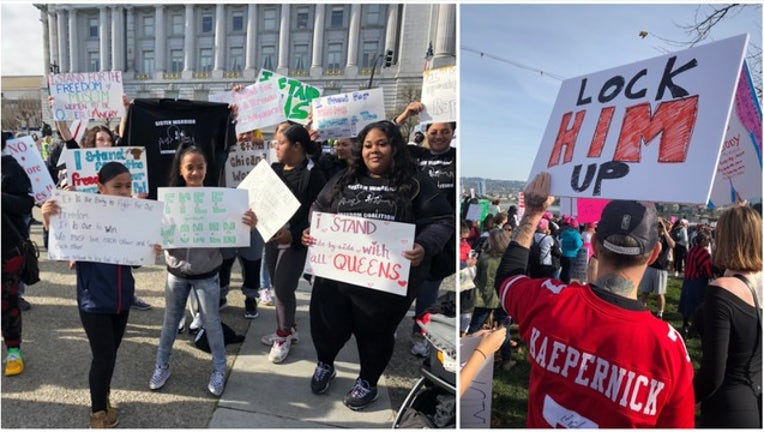 (BCN) - Tens of thousands turned out Saturday in cities across the Bay Area for a series of Women's Marches celebrating the record number of women sworn into Congress and advocating for womens' and civil rights.

It was the third year in a row for the marches, which began in January 2017 in the wake of the election of President Donald Trump, drawing huge crowds at events throughout the globe.

"Women will save the soul of America," Rep. Barbara Lee, D-Oakland, told a crowd gathered at the Lake Merritt Amphitheater Saturday morning.

"This past November, we elected 113 women who were sworn in to serve in our nation's capital in the most diverse House of Representatives ever," Lee said to thundering applause and cheers from the audience.

Sonia Pina of Oakland echoed the theme, saying in an interview, "We have an unprecedented number of women in Congress. It's exciting to see the effect of what we are doing," referring to the marches, which began with the aim of electing more women.

Rachel Murch of Hayward said, "I support equality across all realms: LGBTQ, immigrants, all races, all religions."

After addressing the crowd at the Oakland Women's March, Congresswoman Lee whisked across the bay to the San Francisco march in time to address demonstrators there.

Other speakers at the "Truth to Power" San Francisco event, which began at the Civic Center Plaza, included comedian and actor Mona Shaikh and Mayor London Breed.

After the rally, participants in the San Francisco event began marching from the Civic Center down Market Street to Embarcadero. Organizers earlier in the day had predicted a turnout between 60,000 and 80,000.

About 500 people turned out for the Women's March in Petaluma, organizers said. After a rally at Walnut Park at Petaluma Boulevard South and D Street, participants marched through downtown.

In Walnut Creek, demonstrators gathered for a rally at Civic Park at Civic Drive and North Broadway, then marched through downtown.

In San Jose, a march began at 11 a.m. at San Jose City Hall, with a rally afterward at Arena Green East.