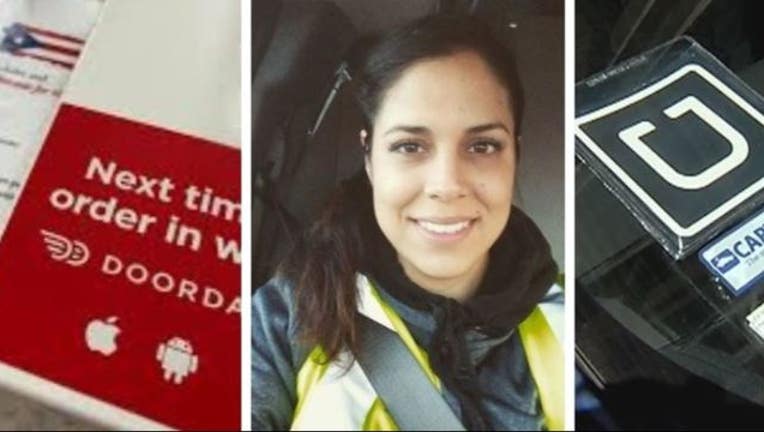 AB5 seeks to help Kat Palma of Pittsburg and other gig economy contractors like her by clarifying who is an independent contractor and who is an employee.

SACRAMENTO, Calif. (KTVU) - Kat Palma, 30, of Pittsburg was lured to deliver packages after reading Amazon’s offers to "be her own boss and set her own hours."

She definitely liked the extra cash. But pretty soon, Palma realized the contract courier job was not all it was cracked up to be.

“I wasn’t given breaks,” she said. “They never accommodated my needs when I was pregnant. I had to carry huge packages and eat lunch. I just had to continue working or I’d get chewed out.”

Assembly Bill 5, which passed 59 to 15 on Wednesday, seeks to help Palma and other gig economy contractors like her by clarifying and codifying a groundbreaking state Supreme Court decision from last April called Dynamex Operations West Inc. v. Superior Court of Los Angeles. That decision set a standard in California to determine whether someone is an independent contractor or an employee. The legislation comes at a time when it seems like almost everyone has a part-time gig driving for a rideshare or delivery company, trying to earn some extra cash to make ends meet. Gig economy supporters say they are providing a much-needed resource for extra income and that many regular people love the independence of these side jobs.

The bill now moves to the Senate, where hearings likely won’t start until July.

“This is a pretty huge deal,” said Steve Smith of the California Labor Federation, the bill's sponsor, which was authored by state Assemblywoman Lorena Gonzalez (D-San Diego). “It potentially affects hundreds and thousands of workers in California who would not become employees.”

That means that companies such as Uber, Lyft, DoorDash and Amazon Flex, to name several, would have to start abiding by basic protections such as paying unemployment insurance, workers compensation and health insurance, while also adhering to state labor codes and the minimum wage.

And these benefits come at a crucial time. The Federal Reserve’s latest report on economic wellbeing in the US, found that in 2018, workers who supported themselves through the gig economy struggled financially far more than the average person. The fiscal impact of companies treating independent contractors as employees isn’t known at this point, according to the legislative analyst’s office.

California is the first state to be pushing this legislation with the weight of the state Supreme Court decision behind it, Smith said, while also acknowledging that the enforcement issue hasn’t been worked out yet. Fines and penalties will likely be added into the bill later, as the legislation works its way through the Senate.

“Everyone will be watching California closely,” Smith said. “California is a national leader on this issue and it’s where most of these companies are headquartered.”

The Dynamex ruling set forth a three-part standard, called the ABC test, that says a worker is an independent contractor only if all of these apply:

Not every independent contractor will fall under AB 5. Emergency room doctors, insurance agents, financial advisors, hair stylists, Realtors, accountants, architects, graphic designers and other types of professions won’t be affected by any new legislation precisely because they meet the standards under the ABC test, Smith said.

There are critics to this bill.

The Southwest California Legislative Council, based in Temecula, Calif. formally opposed it

“The rise of independent contractors has served to ignite large portions of the California economy, encourage entrepreneurship, and provide income for an estimated four million workers. Many of our members are local entrepreneurs who contract their services out to a variety of businesses, enabling them to benefit from multiple income streams,” the group wrote, submitting its argument to the state.

"In light of the disastrous Dynamex ruling, it shouldn’t take lobbyist-inspired carve-outs for Californians to be their own bosses," she said in an email. "The overwhelming majority of independent contractors prefer the flexibility and control their working situations provide. From Uber drivers to dog walkers, salon workers and barbers, independent contracting is a valuable tool for Californians trying to cope with the state’s sky-high cost of living. Employers who mis-classify workers should be punished, but destroying the business model that contractors around the state have built careers on isn’t the way to address that issue.”

Waldron also cited a recent survey by the Bureau of Labor Statistics, which found that fewer than 1 in 10 independent contractors prefer traditional work arrangements.

What has happened to personal choice? Waldron asked.

Uber, Lyft and Amazon did not respond to KTVU for comment.  These companies have responded in legal battles, however, essentially arguing that individuals sign up for the independent lifestyle.

Uber drivers have spent more than six years fighting this very issue, for example, saying they’ve been intentionally misclassified. They argue that drivers should be considered employees because the company has so much control over their workday, including strict rules on their vehicle conditions, what rides they can take, and which routes to take. Uber has maintained that drivers are not employees because they set their own schedules and provide their own cars. Ultimately, Uber settled the main court case with 13,600 Uber drivers, agreeing to pay them $20 million, but without changing their status as independent contractors.

Steven Tindall, an Oakland-based attorney with the Gibbs Law Group, sued Amazon Flex in January, arguing essentially the same thing: His client, Sean M. Hoyt, who used to deliver in San Francisco full time before he was terminated, sued the company. He alleged that he was intentionally misclassified and that Amazon failed to pay him overtime, reimburse expenses, give him meal breaks or hand him an itemized wage statement.

Tindall said that if AB5 becomes law, it will only strengthen his suit. “It will make it plainly illegal what they are doing,” he said.

For Palma, have more support legally owed to her would have been a boon.

She cited a time where a dog bit her on an Amazon route in Vallejo and “no one did anything to help.” She said she was told to deliver packages during the wildfires in Northern California despite the danger. And that she’d sometimes take longer to deliver her 250 packages because she was assigned destinations that couldn’t have been completed in the time allotted to her.

“A lot of employees go through hell,” Palma said. “These jobs are not always what you think. People get fooled.”