A third grade teacher in Washington, D.C., became a playground hero after making a full-court shot and winning her students a cup of hot chocolate on Dec. 17, 2021. Credit: @htsgeorgetown via Storyful

WASHINGTON - An elementary teacher made the shot of a lifetime for her third-grade students in Washington, D.C., earning them a delicious cup of hot chocolate.

And as it turns out, the viral basketball shot was no Christmas miracle.

Kathleen Fitzpatrick, a teacher at Holy Trinity School in the Georgetown neighborhood of the nation’s capital, had promised the treat to her students if she sank the full-court shot on Dec. 17. A video posted by the Catholic elementary school shows Fitzpatrick on the opposite side of an outdoor basketball court, going for the shot.

Much to the elation of her students, she made it. The video shows all the kids screaming and jumping in the air around her, going wild for their teacher’s "Hail Mary" shot and a future cup of hot chocolate.

"Ms. Fitz threw a Hail Mary and promised all the 3rd graders hot chocolate if she made the shot. Well, God was looking out for her," the school wrote in the video caption.

After a video of the sweet moment took off on social media, Holy Trinity School told Storyful that "the kids did get their promised hot chocolate." It later posted a photo of some kids smiling while holding their promised drink. 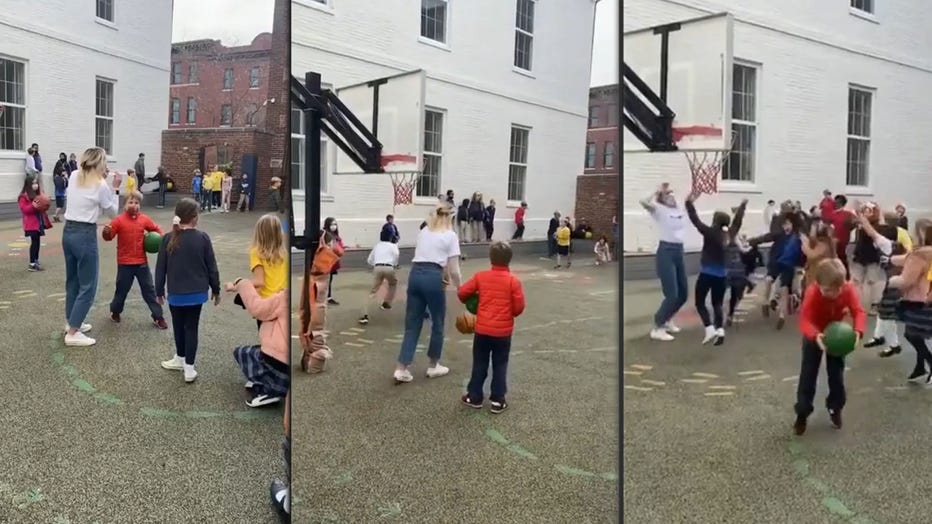 Kathleen Fitzpatrick is pictured in the viral video going for the long shot in the schoolyard of Holy Trinity School in Washington, D.C. (Credit: @htsgeorgetown via Storyful)

And for those impressed by her form, Fitzpatrick is no stranger to the basketball court. She played college basketball at Rutgers University.

An online biography states that Fitzpatrick set the career record for 3-pointers at her high school (245), tied the single-season mark for 3-pointers (72) as a senior and finished fourth all-time in scoring (1,329 points).