WASHINGTON - Donald Trump's closest advisers viewed his last-ditch efforts to pressure Vice President Mike Pence to reject the tally of state electors and overturn the 2020 election as "nuts," "crazy" and even likely incite riots, witnesses revealed in stark testimony to the Jan. 6 committee on Thursday.

Gripping new evidence also detailed how the mob that stormed the Capitol that day came within 40 feet of where Pence and his team were sheltering, highlighting the danger Trump had put him in.

With live testimony, including from Pence’s counsel, and other evidence from its yearlong investigation the panel is dissecting as unlawful and unconstitutional the plan from conservative lawyer John Eastman to reverse Joe Biden's election victory. The pressure Trump put on Pence, including at a Jan. 6 rally, led directly to the insurrection at the Capitol, the panel said.

January 6 Committee Chairman Rep. Bennie Thompson opened the third hearing by citing Pence's own words that there is "almost no idea more un-American" than the one he was being asked to do — reject the vote — in remarks on June 16, 2022.

"Are you out of your effing mind?" said Eric Herschmann, a lawyer advising Trump, told Eastman in recorded testimony shown at the hearing.

A text message from Fox News’ Sean Hannity to Trump’s chief of staff Mark Meadows about the plan in the run-up to Jan. 6 read: "I’m very worried about the next 48 hours." 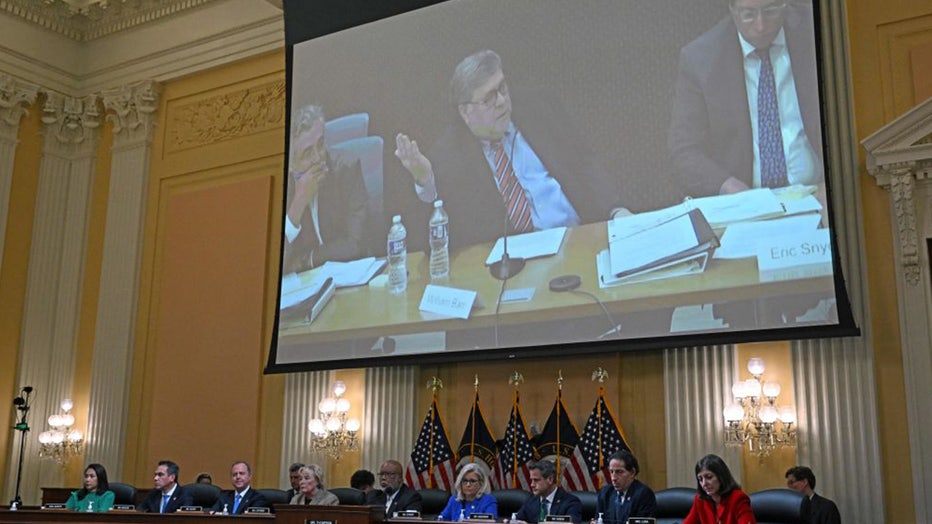 FILE - Former United States Attorney General William Barr appears on screen during a House Select Committee hearing to Investigate the January 6th Attack on the US Capitol, in the Cannon House Office Building on Capitol Hill in Washington, DC on June

The panel opened its third hearing this month demonstrating that Trump’s false claims of a fraudulent election left him grasping for alternatives as courts turned back dozens of lawsuits challenging the vote.

Trump latched onto Eastman’s highly unusual plan to defy historical precedent of the Electoral Count Act, and started pressuring Pence in public and private as the vice president was to preside over the Jan. 6 joint session of Congress to certify Biden’s election.

The committee has said the plan was illegal, and a federal judge has said it is "more likely than not" Trump committed crimes in his attempt to stop the certification

Panel Chairman Bennie Thompson, D-Miss., opened the latest hearing citing Pence's own words that there was "almost no idea more un-American" than the one he was being asked to perform — reject the vote. 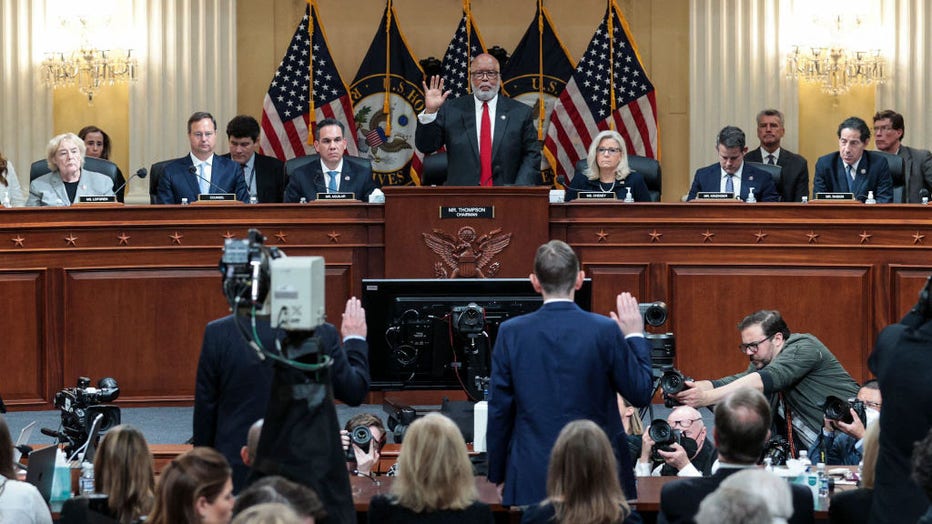 US Representative and Committee Chairman, Bennie Thompson, swears in witnesses during the third public hearing of the US House Select Committee to Investigate the January 6 Attack on the US Capitol, on Capitol Hill in Washington, DC, on June 16, 2022

The committee portrayed the gripping, if complicated, final days before the deadly Jan. 6 insurrection as the defeated Trump pursued the theory that Pence could swing the election, putting his own vice president in danger as the mob headed toward the Capitol.

The panel heard from Greg Jacob, the vice president’s counsel who fended off Eastman’s ideas for Pence to carry out the plan, and retired federal judge Michael Luttig, who called the plan from Eastman, his former law clerk, "incorrect at every turn."

Jacob said that Pence summoned him to his West Wing office in early December 2020 to seek clarity about the vice president’s role in the certification of election results. He said it became clear to Pence that the founding fathers did not intend to empower any one person, including someone running for office, to affect the election result.

Luttig, a highly-respected conservative scholar who had been a leading contender more than a decade ago for the Supreme Court, said that had Pence obeyed Trump’s orders, obviously contrary to the law, the declaring "of Donald Trump as the next president would have plunged America into what I believe would have been tantamount to a revolution within a constitutional crisis in America."

Thursday’s session also presented new evidence about the danger Pence faced as rioters outside the Capitol were chanting "Hang Mike Pence" with a makeshift gallows as the vice president fled with senators into hiding. Video was shown of the rioters spewing vulgarities about Pence as they headed toward the Capitol. Nine people died in the insurrection and its aftermath.

The Jan. 6 committee on June 13, 2022, shared a video of witnesses discussing 2020 election night when FOX News called that President Joe Biden won Arizona – a moment that prompted "anger and disappointment" in Trump’s inner sanctum at the White House.

In another development Thursday, Thompson said the panel will ask Virginia "Ginni" Thomas, the wife of Supreme Court Justice Clarence Thomas, for an interview amid disclosures of the conservative activist’s communications with people in Trump’s orbit ahead of the attack. He did not specify a schedule for that.

"It’s time for her to come talk," Thompson told reporters ahead of the hearing.

Ahead of the hearing, Pence's former chief of staff, Marc Short, said his boss was determined to stay at the Capitol that night and finish the job, despite the threats.

"He knew his job was to stay at his post," Short said on CNN on Wednesday.

Short said Pence didn't want the world seeing the vice president leaving the Capitol when "a hallmark of democracy" was under siege.

The panel's yearlong investigation is showcasing Trump's final weeks in office as the defeated president clung to "the big lie" of a rigged election even as those around him — his family, his top aides, officials at the highest levels of government — were telling him he simply lost the election.

Chris Stirewalt, a former political editor for FOX News Channel, made the election night call that President Joe Biden won Arizona – a moment that prompted "anger and disappointment" at the White House.

Former Attorney General William Barr, who resigned at the end of 2020 rather than be part of Trump's plans, testified earlier that the president was becoming "detached from reality" if he believed the lies.

With 1,000 interviews and some 140,000 documents, the committee is connecting the dots, showing how Trump's false claims of election fraud became a battle cry as he summoned thousands of Americans to Washington for a Jan. 6 rally and then sent them to Capitol Hill to "fight like hell" for his presidency.

More than 800 people have been arrested in the Capitol siege, and the panel is considering whether to send a referral for criminal charges against Trump to the Justice Department. No president or former president has ever been indicted by the Justice Department, and Attorney General Merrick Garland has said he and his team are following the proceedings in Congress.

Thursday's hearing unpacked the Eastman plan to have the states send alternative slates of electors from states Trump was disputing, including Arizona, Georgia, Michigan, Pennsylvania and Wisconsin. With competing slates for Trump or Biden, Pence would be forced to reject them, returning them to the states to sort it out, under the plan.

The committee in hearings ahead will be delving into the roles of extremist groups and others who heeded Trump's call to Washington. Leaders and others from the Oath Keepers and Proud Boys face rare sedition charges over their roles in the Capitol attack.

Several members of Congress are also under scrutiny, including Rep. Barry Loudermilk, R-Ga., whom the committee has asked for an interview to discuss a Capitol tour he gave that included basement tunnels to a group of people the day before the attack.

The panel is also probing several candidates for elected office, including the Republican nominee for governor in Pennsylvania, who were among the rioters.

The panel, which is expected to deliver a final report on its findings later this year, intends for its work to be a record for history of the most violent attack on the Capitol since the War of 1812. Unlike other national traumas that have pulled the country together, the Jan. 6 Capitol attack appears to have left many Americans divided. Congress splintered over forming the committee, which most Republicans opposed.

The panel's two Republicans, Cheney and Rep. Adam Kinzinger of Illinois, have been shunned by the GOP.

RELATED: US Capitol Riot: What to know, where to watch the Jan. 6 insurrection hearings

Associated Press writers Kevin Freking and Eric Tucker in Washington and Farnoush Amiri in Los Angeles contributed to this report.