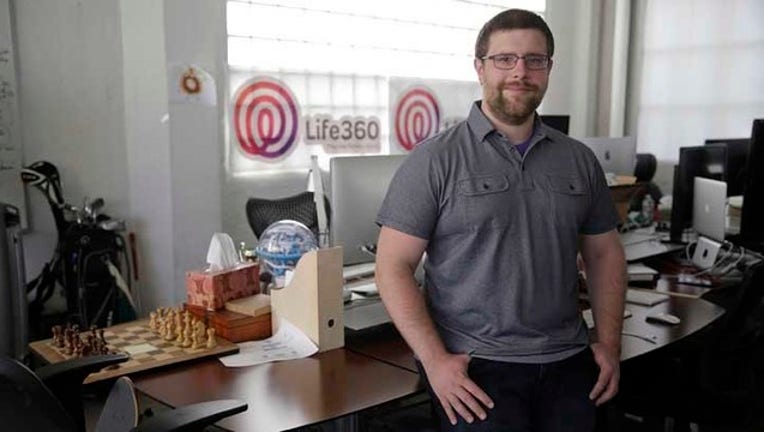 WASHINGTON (AP) — The same week that Alex Haro and Chris Hulls raised $50 million for their mobile app, Life360, the business partners got a letter. It said they had three days to pay licensing fees to a company they had never heard of because their app violated its patented technology.

Haro and Hulls traced the company, Advanced Ground Information Systems, to a coastal home in Jupiter, Florida, with a phone number that initially went to an anonymous voicemail. They couldn't find any employees on LinkedIn. To Haro, it was "a punch in the gut," he said.

On the other side of that letter was Malcolm "Cap" Beyer, Jr., a 76-year-old who had filed patents a decade ago on cellphone mapping. He said his attorney told him that he had a strong case against the startup, even though the general technology had been widely used by other tech companies for years. Beyer insists the mobile app's $50 million in fundraising had nothing to do with it.

In the end, a jury sided with Life360 on all counts — but not before Haro and Hulls shelled out nearly $1.5 million in legal fees.

Congress is expected to take up legislation this year that would make it tougher for people like Beyer to claim patent infringement, and put them on the hook for legal costs if they lose. The bill has become a top lobbying priority this year for the tech industry, which says it repeatedly fends off frivolous lawsuits because of poorly written software patents and laws that favor patent holders.

But lawmakers have repeatedly stumbled over the issue, which doesn't fall neatly along party lines. America's drugmakers, universities and trial lawyers claim that patents are the lifeblood of American invention and that the current bill goes too far.

On Tuesday, the House will pick up the issue again with a hearing of its Judiciary Committee. Among those testifying is Keven Kramer, Yahoo's deputy legal counsel, who estimates the company has spent $100 million fighting bogus patent lawsuits since 2007.

"That's money we could use elsewhere on research and development, people, jobs," he said.

"Patent trolls" generally refer to businesses that buy up patents, particularly in technical areas like computer chips, cloud computing and wireless routers, with the sole intention of filing lawsuits or demanding licensing fees from tech companies, particularly startups around the time of their public offering.

Not wanting to pay for a protracted legal fight, the defendants almost always settle even if they think they'd win. Kramer calls it a vicious cycle — the more companies settle, the more lawsuits are filed.

"It's like a legal version of a mob protection racket," said Noah Theran, a spokesman for the Internet Association, a coalition of web-based companies. "The tactics are different, but the end result is a good, old-fashioned shakedown."

Beyer said in a phone interview last week that he's a defense contractor with more than a dozen employees, not "some vile animal that's filing lawsuits" for sport.

"We are simply just trying to enforce our patent," he said.

Beyer's lawyer, Mark Hannemann, denied allegations by Haro that the law firm used Beyer's patents to try to coerce Life360 into a large, quick settlement. He said the company had sought only $3 million in damages, "which is not a large amount in a patent case." He also alluded to possibly appealing the case, saying "there is, potentially, a long way to go in the process."

"Mr. Beyer made these inventions years ago and has built AGIS — his third technology company — around them," Hannemann wrote. "The reason we have a patent system is so inventors like Mr. Beyer can protect their inventions."

Enter Congress. Last year, the House passed the "Innovation Act" by House Judiciary Chairman Rep. Bob Goodlatte, R-Va. The bill would toughen requirements when filing patent challenges in court, such as limiting the amount of documentation that can be demanded before a judge makes an initial ruling. The bill also opens the door to a requirement that plaintiffs pay legal bills of the defendants if they lose.

Still opposing the bill, however, are pharmaceutical and biotech companies and universities that say the legislation would make it too tough and expensive for them to protect their patents.

Haro said he thinks some kind of legislation is necessary, or else the U.S. economy will suffer.

"It shouldn't be so expensive to defend yourself from a completely meritless lawsuit," Haro said.