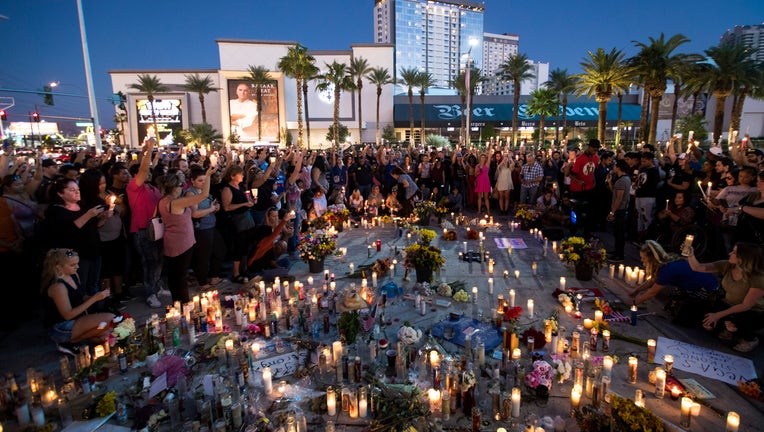 LAS VEGAS, NV - OCTOBER 8: Mourners hold their candles in the air during a moment of silence during a vigil to mark one week since the mass shooting at the Route 91 Harvest country music festival, on the corner of Sahara Avenue and Las Vegas Boulevar

LAS VEGAS - More than 5,100 responses have come in to a panel planning a permanent memorial to the 2017 shooting on the Las Vegas Strip that became the deadliest in modern U.S. history.

Ahead of a deadline on Sunday, Clark County officials said a questionnaire about the 2017 massacre has drawn lots of ideas about where a memorial should be located and other issues.

The 1 October Memorial Committee in Las Vegas plans to identify a location, size, design and funding for a memorial to the 58 people killed that night and at least two others whose later deaths were blamed on their injuries.

Officials say victims were from Nevada, California, 13 other U.S. states and Canada.

More than 850 people were wounded and injured fleeing gunfire raining into a country music crowd of 22,000 people. Officials say thousands of others were affected.

The lone gunman who killed himself before police reached him in an upper floor suite at the Mandalay Bay resort across Las Vegas Boulevard.

The site where the shooting happened has been idle since the shooting. It is owned by Mandalay Bay parent company MGM Resorts International.

The memorial will be separate from a Community Healing Garden in downtown Las Vegas that was created following the shooting.