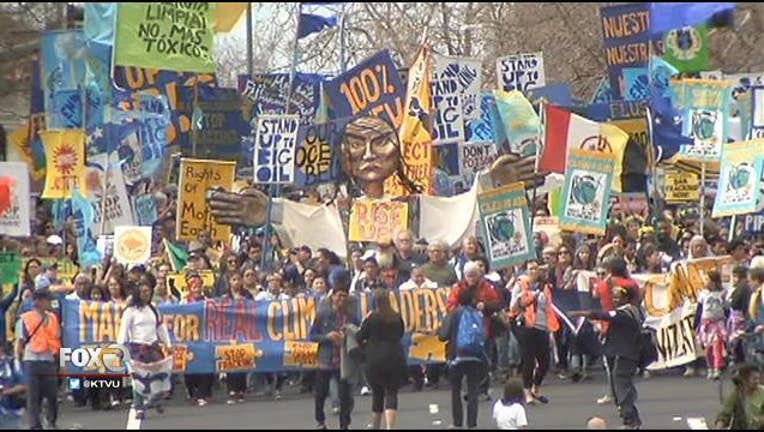 OAKLAND, Calif. (KTVU and AP) -- Thousands of environmental and labor activists took to the streets of Jerry Brown's hometown with a simple message for the governor: end fracking.

Carrying signs calling on Brown to "stop fracking with our health" and "follow the science," the marchers said the governor's legacy as an environmental leader was at stake if he didn't ban the practice.

California is the No. 3 oil producer in the nation and has added an average of 300 wells each month for the past decade. About half of them are using hydraulic fracturing or fracking, a technique that involves injecting water, sand and chemicals to break apart underground rocks so oil and gas can escape.

Adam Scow with Food & Water Watch said people traveled from as far south as San Diego and as far north as Chico to attend the rally.

Even city officials are joining in on the fight. Oakland's Vice Mayor Rebecca Kaplan and Council member Dan Kalb have joined together and plan to introduce an anti-fracking resolution to the city council. The resolution supports the requests calling on Gov. Brown to end fracking across the state.

"We need to follow the lead of scientists, the state of New York and others throughout the nation who are recognizing that fracking endangers our drinking water and can even make earthquakes worse," Kaplan said.

But Sabrina Lockhart with Californians for Energy Independence said those claims are just unsubstantiated fears.

"This process has been used for a half century in California without incident," Lockhart said.

Lockhart said California is the third largest consumer of oil and gas in the world and gas is produced under strict environmental standards set by the state.

"An independent body of scientists found that California's tough regulations could mitigate any potential impacts and no impacts have been found," Lockhart said.

She added that an outright ban would increase our dependence on foreign oil, forcing it to be hauled in by tanker ships or rail cars.

Still, Scow said activists would continue to urge Governor. Brown to end fracking in hopes of transition to use of renewable resources.

Brown's administration says so far there is no direct evidence of harm from fracking in California.