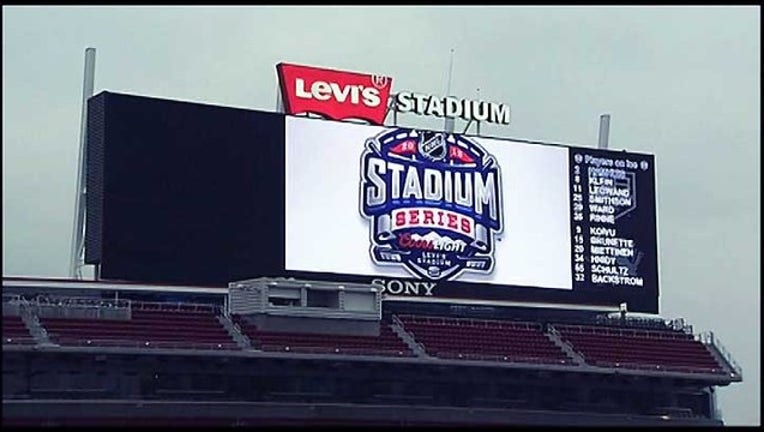 SANTA CLARA (BCN) -- A National League Hockey game pitting the San Jose Sharks against Los Angeles Kings on an outdoor frozen ice rink will be played before a sellout crowd at Levi's Stadium on Saturday, a league spokesman said.

Fans have paid $80 to $300 to attend the regular season game, part of the NHL's outdoor 2015 Coors Light Stadium Series, and a three-hour hockey-themed festival prior to the opening face off, New York-based NHL

The process of making ice for the out-of-doors hockey rink, and to keep it frozen during sunny days in South Bay, has taken several days this week with employees working at night to avoid the sun, Horan said.

Fahrenheit, according to Horan.

In daytime this week leading to Saturday's game, a reflective tarp is being placed to cover the rink's ice to both insulate it and repel the sunlight.

The game itself starts at 7 p.m. Saturday, when the sun will be down.

The festival begins at 4 p.m. between Gates A and C of the stadium and runs up until game time.

Last year, the outdoor Stadium Series was played on Jan. 25 at Dodger Stadium in warmer Los Angeles followed by two other open-air games in New York and one in Chicago.

The Sharks-Kings game will be televised live on the NBC Sports Network in the United States and CBC and TVA2 in Canada.