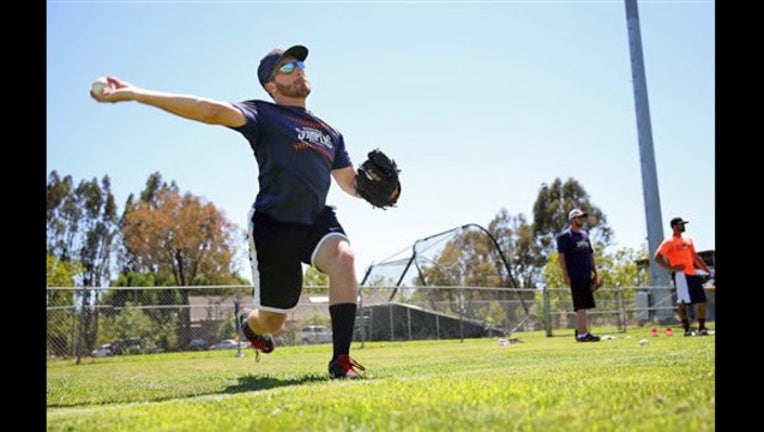 SAN FRANCISCO (AP) — Baseball history will be made on a field of wistful dreams in Northern California's wine country Thursday with the appearance of the sport's first openly gay active professional.

Pitcher Sean Conroy, 23, is scheduled to take the mound in his first start for the Sonoma Stompers, a 22-man team that is part of the independent Pacific Association of Baseball Clubs.

The Stompers recruited the upstate New York native out of college in May. General Manager Theo Fightmaster says Conroy privately shared his sexual orientation with teammates and management before agreeing to come out publicly in time for the team's home field gay pride night.

"The first conversation I had with Sean was, 'I want you to know this organization supports you, we respect who you are. We respect who you as a pitcher and a person and to whatever degree you want your story told, we'll help facilitate that," Fightmaster said. "His goal has always been to be the first openly gay baseball player, so he was very much in favor of telling the story, of carrying that torch."

Major League Baseball historian John Thorn confirmed that Conroy is the first active professional to come out as gay. Glenn Burke, an outfielder for the A's and Dodgers, and Billy Bean, a utility player with the Tigers, Dodgers and Padres, came out after they retired.

"Of course that over the years there have been rumors of this Major League player or that one being gay, but that's just idle chatter and counts for nothing," Thorn said. "In terms of an openly gay player as (the) pitcher in your neck of the woods, we haven't had one yet."

Conroy, a right-hander who has earned four saves and allowed only two hits in the seven innings he has pitched so far as a closer for the 15-3 Stompers, said he had been open with his high school, summer league and college teams and told his family he was gay at age 16. It would have been strange not to do the same with once he moved across the country and started making friends on the team in Sonoma, he said.

"People would talk about their girlfriends and who they were going out to see that night. Instead of getting the different looks or questions when I didn't join them, I'd rather tell you the truth and let you know who I am and have real conversations instead of the fake ones," Conroy said.

As far as coming out publicly, Conroy said he regards it as a way to both help his team and to set an example for other players.

"It's not that I wanted it to go public, but I didn't care if it was open information. It's who I am," he said. "I am definitely surprised that no one else has been openly gay in baseball yet."

Bean, who serves as Major League Baseball's ambassador of inclusion, called Conroy a pioneer and said he planned to keep an eye on the young pitcher.

"It will be a great day for the LGBT community. I hope he pitches well and gets another opportunity to start another game," Bean said. "It doesn't matter if he pitches in the big leagues or not, he's going to become a leader (tonight) in many ways, an influential leader for a lot of young kids not only in that community but those who will read the story and who may be pondering that same decision in their teenage years and they want to be baseball players or they want to be football players"

Conroy's history-making start comes at a watershed moment for gay rights, with the U.S. Supreme Court scheduled to rule any day now on whether to make same-sex marriage legal across the nation.

The Stompers are not planning to make a special announcement or call attention to the milestone so Conroy can focus on his pitching, although some players will be wearing rainbow socks or other gay pride symbols in support of their teammate, Fightmaster said.

"As a small independent team we do try to find ways to be relevant, and this is certainly in that category. But I think the Giants would do the exact same thing if they were in this situation," he said. "We try to saddle that line between respecting the game and doing what's right by the players who are here every day and doing stuff outside the box enough so people realize we exist."

The life of a Stomper is certainly a far cry from the majors. Players live with host families during the June-to-August season, earn $650 a month on average and supply their own cleats, batting gloves and elbow guards. Arnold Field, their home turf, seats 370.

Conroy hopes to catch the eye of a big league scout, but hasn't focused on much beyond this season.

"I'm just looking to play well and do as well as I can wherever they put me," he said.