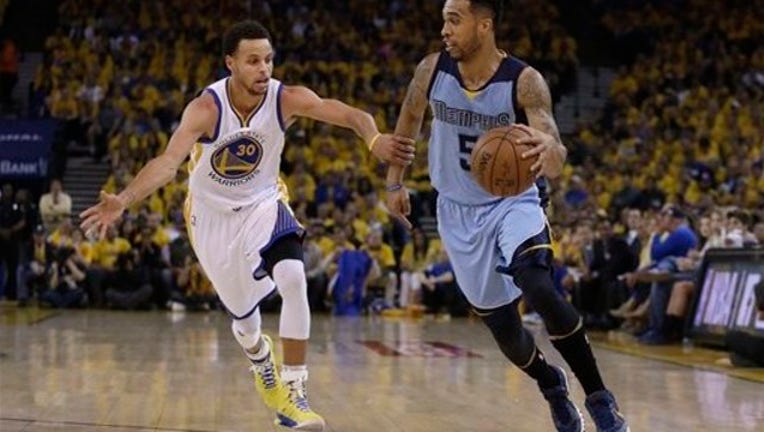 OAKLAND, Calif. (AP) - The Golden State Warriors and Atlanta Hawks have regained control of their respective series, doing their best to restore order in the NBA playoffs.

Though things can turn quickly in these series, and the league could easily fall right back into postseason chaos. That's exactly what the upset-minded Wizards and Grizzlies have in mind.

Monday morning when the week started, the Hawks and Warriors both were down 2-1 in their series. Now a combined four wins and five days later, they head into road contests Friday night just one win away from the conference finals.

The Warriors are looking to close out a second playoff series in the same postseason for the first time since winning the 1975 NBA title, and their confidence is high coming off a pair of impressive routs of the Memphis Grizzlies.

"You go get it done," Kerr said. "It's going to be tough on the road against an excellent team. But if we can continue to play the type of defense that we have shown the last couple of games then we'll have a chance to do so."

Atlanta leads the Wizards, but the Hawks have been anything but impressive.

Washington has battled the Hawks, playing without All-Star point guard John Wall and winning one game on a last-second shot — and losing another the same way. But Atlanta has found a way to get it done. The Hawks haven't been in this position since 1988 when they were up 3-2 against Boston, but couldn't close out the Celtics.

The Wizards don't plan on going away quietly either.

The Grizzlies also are ready for a final stand at home.

"There are no excuses," Grizzlies guard Mike Conley said. "We have to take care of business at home and fight for another chance."

A look at the two games:

The Warriors have started knocking down 3s again with 14 in each of the past two games. They also figured out how to smother one of the league's best inside scoring teams, holding Memphis to 37 of 98 shooting in the paint in that span.

All that poor shooting means neither Grizzlies forward Zach Randolph nor center Marc Gasol are getting to the free throw line. Randolph has attempted only three free throws the last two games combined, and Gasol is just 7 of 8. Worse, Gasol is 15 of 41 with both men taking too many shots too far away from the basket.

Gasol said the Grizzlies have to get position closer to the basket quicker and beat the Warriors to their preferred position. They also need someone to knock down some perimeter shots to force Golden State to back somebody out defensively.

"We'll give it everything we have, and hopefully it will work out for us," Gasol said. "We're going to try to execute a little better, hold the ball as long as we have to."

Veteran Paul Pierce has hit some timely 3s for Washington, and he nearly had his second game-winner in this series before Al Horford's rebound and putback gave Atlanta an 82-81 win in Game 5.

Hawks coach Mike Budenholzer said they have to be better defending Pierce.

"The defense and activity and reactions to each other need to be better," Budenholzer said. "Probably the ones that were defended with multiple defenders, multiple contests, he's made. Still, we've got to be better."

The Hawks also need more from Kyle Korver who is scoring just eight points a game in this series. He is 14 of 40 shooting (35 percent) and a little worse outside the arc (12 of 35). Korver credits the Wizards for sticking with him defensively.

Wall is expected to play his second straight game Friday night even with the five fractures in his left hand and wrist.

"I told John it had to be, not only for the team's sake but for his sake, (that) he had to be mentally able to play recklessly without worrying about anything" before Game 5. Wittman said. "I thought that's what he did."

Wall will need to be just as reckless in Game 6.