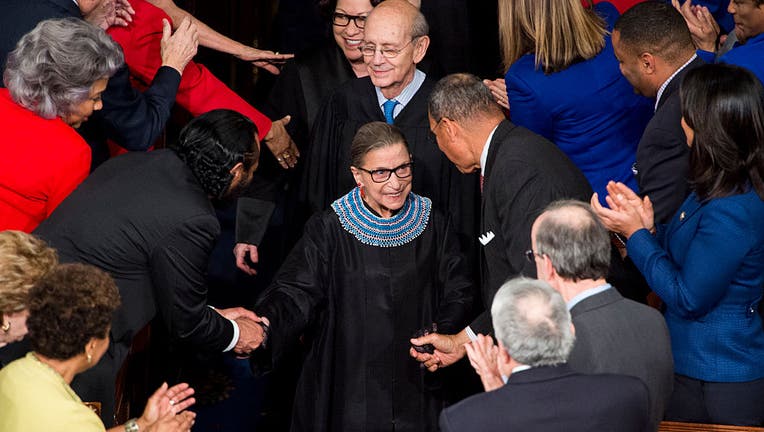 But besides being the oldest member of the court, the trailblazer for womens' rights, who became somewhat of a pop icon in recent years known affectionately as 'RBG', was remembered in a number of ways by her contemporaries in the political realm and beyond.

In a press release, her colleague Chief Justice John G. Roberts, Jr. said of Justice Ginsburg: "Our Nation has lost a jurist of historic stature. We at the Supreme Court have lost a cherished colleague. Today we mourn, but with confidence that future generations will remember Ruth Bader Ginsburg as we knew her -- a tireless and resolute champion of justice."

Speaker of the House Nancy Pelosi tweeted: "Tonight, the flags are flying at half staff over the Capitol to honor the patriotism of Justice Ruth Bader Ginsberg. Every woman and girl, and therefore every family, in America has benefitted from her brilliance."

You can read the Speaker's full statement here.

President Trump was first notified of the Supreme Court Justice's passing by members of the press following a campaign rally in Minnesota.

"She never failed. She was fierce and unflinching in her pursuit of the civil rights of everyone," former vice president and Democratic presidential candidate Joe Biden said of Ginsburg Friday evening. Biden, who learned of the Justice's passing during a flight, called her a beloved figure and giant in the legal profession. He offered his condolonces to those who cared about her. "Ruth Bader Ginsburg stood for all of us."

Sen. Kamala Harris, Biden's running mate and vice presidential candidate, said, "Tonight we mourn, we honor, and we pray for Justice Ruth Bader Ginsburg and her family. But we also recommit to fight for her legacy."

She noted Ginsburg's "fervent wish" in her final moments with her family to "not be replaced until a new president is installed." Harris said that wish would be honored.

Former President Barack Obama said even with cancer, Ginsburg was a fighter until the end. In a statement posted on Medium, he said he and former First Lady Michelle Obama admired her greatly.

He also called on Republicans to uphold their standard that the Senate not fill an open seat on the Supreme Court before a new president is sworn in, something the GOP applied to President Obama when they refused to hold a hearing or vote on Merrick Garland, his SCOTUS pick in 2016.

Former First Lady, Secretary of State Hillary Clinton tweeted: "Justice Ginsburg paved the way for so many women, including me. There will never be another like her. Thank you RBG."

California Governor Gavin Newsom called Ginsburg a trailblazer and asked for her memory to be honored by preserving the "ideals she fought so tirelessly for."

"Ruth Bader Ginsburg lived an incredible life, breaking barriers and delivering justice. Her passing is a devastating loss for our country. We can honor her life by continuing to fight for a more just society," the mayor wrote.

Former 2020 presidential candidate Sen. Bernie Sanders called Ginsburg, "...one of the great justices in modern American history." The progressive champion characterized her death as, "a tremendous loss to our country."

Senior U.S. Senator from California Dianne Feinstein said, "She may have been small of stature but she was an absolute giant of jurisprudence."

Rep. Maxine Waters of Southern California remembered the justice as a "titan & legend" who had a "brilliant legal mind & dedication to justice & equality..." She noted that while a champion was lost, Ginsburg's legacy, which many characterized as 'tough as nails', will live on.

Los Angeles Mayor Eric Garcetti called the death a tragedy and "profound loss for America." He noted that part of her legacy includes the belief that "our daughters can grow up to whatever they want to be."

California's Attorney General Xavier Becerra said Ginsburg "towered over those who sought to close doors or build walls in America," adding that she was "the Little Engine That Could" for those who believed in the American dream.

SF Bay Area Rep. Jackie Speier called RBG an "American Icon of untold proportions," noting she was a feminist with "the steeliest spine." Her immense talent and yearning for justice did not go unnoticed.

California Secretary of State Alex Padilla said her "trailblazing legacy" includes her writing "some of the most consequential decisions in our nation's history."

"We have lost a true champion of American democracy, but we will honor her legacy by carrying on a relentless fight for a more equitable, just United States of America," Padilla wrote.

Across the political aisle, Kellyanne Conway, who worked in the Trump administration's White House as a counselor to the president, said the Justice worked with "passion and conviction, inspired many women, offered hope to other cancer survivors."

In San Francisco, a vigil in Justice Ginsburg's honor will be held Friday night at 7 p.m. at Harvey Milk Plaza in the Castro neighborhood. Particpants are asked to bring a candle and to wear a mask.