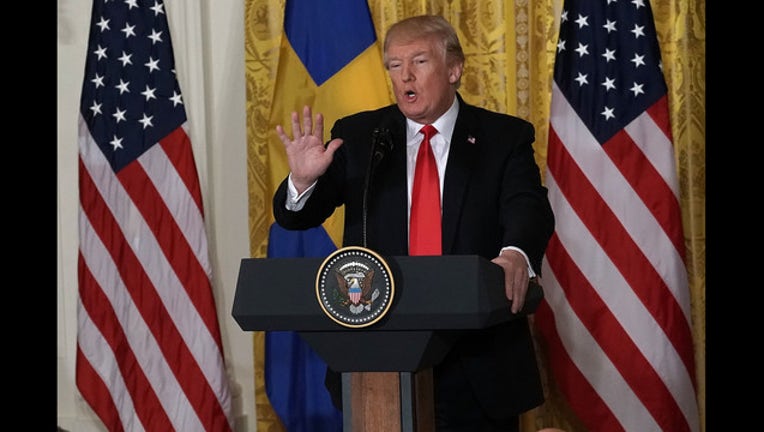 The president said he planned to move forward with special tariffs on imported steel and aluminum, contending the U.S. has long been "mistreated" in trade deals.

"We're doing tariffs on steel. We cannot lose our steel industry. It's a fraction of what it once was. And we can't lose our aluminum industry," Trump said during a joint news conference with Swedish Prime Minister Stefan Lofven.

The president's pledge for action, which would be in line with a one of his campaign promises, came after House Speaker Paul Ryan of Wisconsin called for a "more surgical approach" that would help avert a potentially dangerous trade war. Senate Majority Leader Mitch McConnell of Kentucky said there was concern Trump's plan could lead to such disruptive turmoil.

"We are urging caution," McConnell said.

Republican Sen. David Perdue of Georgia, who opposes the tariffs, said after meeting Tuesday with White House chief of staff John Kelly that the administration was willing to consider his views. "Absolutely. There's an openness now," Perdue said.

"I think there's been a step back," said Sen. Pat Roberts, R-Kan. "I don't think he's reconsidering, but I think he's trying to figure out what his best step is forward."

But those views sounded more like wishful thinking after Trump's news conference, in which he reiterated his plans to impose the tariffs of 25 percent on steel imports and 10 percent on aluminum imports. He said he'd respond to unfair treatment by foreign countries and huge trade deficits. "We're going to straighten it out and we'll do it in a very loving way," Trump said.

The president also reaffirmed the possibility that Canada and Mexico might not face the tariffs if they are willing to offer more favorable terms under the North American Free Agreement, which is being renegotiated.

Treasury Secretary Steven Mnuchin told lawmakers Trump was trying to balance protections for beleaguered steel and aluminum producers while "making sure that we don't do undue harm to the economy."

"We are not looking to get into trade wars. We are looking to make sure that U.S. companies can compete fairly around the world," Mnuchin said at a House hearing.

Trump has been keenly aware of how the tariffs may play in a March 13 special House election in western Pennsylvania, part of the nation's steel belt, White House officials have said. The president is headlining a Saturday rally in support of Rick Saccone, who is battling Democrat Conor Lamb in the Republican-leaning district.

The dispute over tariffs has exposed a rift between advocates of free trade, who have long dominated GOP circles, and a president who has railed against China and pushed for more protectionist trade policies.

Internally, White House officials who oppose the blanket tariffs have urged the administration to limit the countries that would be affected and to impose time limits. This would help the president say he delivered on his promise and still try to avoid possible negative consequences, said Stephen Moore, a former campaign adviser and now an economist with the conservative Heritage Foundation.

Republicans in Congress and within Trump's administration say industries and their workers who need steel and aluminum for their products would be hurt by Trump's threatened tariffs. They say Americans will face higher costs for new cars, appliances and buildings if the president follows through on his threat and other nations retaliate.

Trump has said the tariffs are needed to preserve the American industries and protect national security. But he has also tried to use them as leverage in the current talks to revise NAFTA.

Business leaders are mobilizing against the tariffs. The Aluminum Association, a trade group representing 114 member companies with more than 700,000 U.S. jobs, told Trump in a letter Tuesday that it was "deeply concerned" about the effects of the planned tariffs and urged him to seek alternatives such as targeting China and other countries with a history of circumventing trade rules.

Ryan said Trump was correct to focus on the problem of the dumping of steel in the U.S. at lower prices. But he said the administration's approach was "a little too broad and more prone to retaliation."

"What we're encouraging the administration to do is to focus on what is clearly a legitimate problem and to be more surgical in its approach," Ryan said.

Republicans have suggested they may try to undercut the tariffs if Trump goes ahead with them. But Sen. Jeff Flake, R-Ariz., said he was doubtful the GOP majority would be able to muster the votes to pass legislation to block the special taxes.

Flake said it was tough to dissuade Trump because the president "keeps coming back like a homing pigeon on trade deficits."

Mnuchin defended the possible tariffs, telling lawmakers that Trump "loves farmers and the farm community." Rep. David Young, R-Iowa, responded, "It doesn't seem so with some of the policies that are coming out."

Mnuchin said the administration hopes to release details on the tariffs this week. "He does understand the potential impacts it has on the economy and I think we have a way of managing through this," he said.