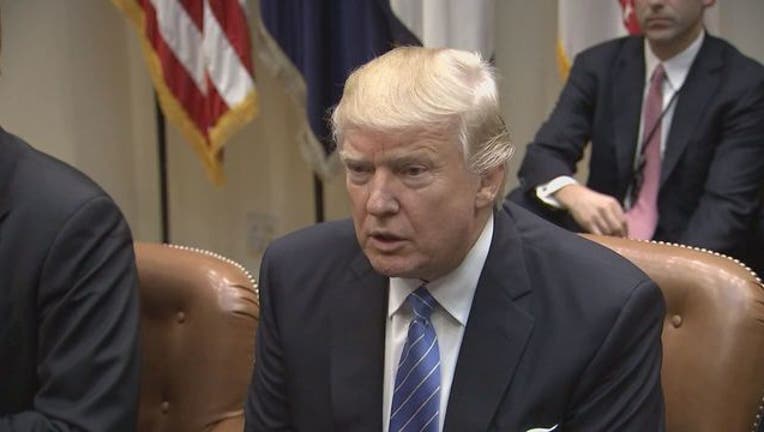 SAN FRANCISCO (AP) - The Trump administration said in court documents on Thursday it wants a pause in the legal fight over its ban on travelers from seven predominantly Muslim nations, so it can issue a replacement ban as it strives to protect the nation from terrorism.

Details of the new proposal were not provided in the filing or at a wide-ranging news conference by President Donald Trump. But lawyers for the administration said in the filing that a ban that focuses solely on foreigners who have never entered the U.S. - instead of green card holders already in the U.S. or who have traveled abroad and want to return - would pose no legal difficulties.

"In so doing, the president will clear the way for immediately protecting the country rather than pursuing further, potentially time-consuming litigation," the filing said.

Trump said at the news conference that a new order would come next week.

"I will not back down from defending our country. I got elected on defense of our country," he said.

Legal experts said a new order focusing only on residents of the seven countries who had never entered the U.S. would still face legal hurdles over possible religious discrimination.

Jessica Levinson, a professor at Loyola Law School in Los Angeles, believes Trump would eliminate some major problems with the new focus.

"But I think that it will definitely still end up in court," she said.

Stephen Vladeck, who teaches at the University of Texas School of Law, said the states challenging the current ban - Washington and Minnesota - would likely change their lawsuit to focus on any revised order.

"It will surely be a mess - and perhaps a repeat of some of the chaos we saw the first weekend of the original order," Vladeck wrote in an email.

The administration asked the 9th U.S. Circuit Court of Appeals to hold off on making any more decisions related to the lawsuit until the new order is issued, and then toss out last week's decision by a three-judge 9th Circuit panel that kept the ban on hold.

The appeals court had asked the Trump administration and Washington and Minnesota to file arguments by Thursday on whether a larger panel of 9th Circuit judges should rehear the case.

Washington state Attorney General Bob Ferguson said the federal government was "conceding defeat" by saying it does not want a larger appellate panel to review last week's ruling. The three judges who issued that decision rejected the Trump administration's claim of presidential authority and questioned its motives in ordering the ban.

The administration attacked the decision in Thursday's court filing, saying the panel wrongly suggested some foreigners may be entitled to constitutional protections. The filing also rejected the judges' determination that courts could consider Trump's statements about shutting down Muslim immigration.

The lawsuit says the ban unconstitutionally blocks entry to the U.S. on the basis of religion and harms residents, universities and sales tax revenue in the two states. Eighteen other states, including California and New York, have supported the challenge.

In his filing with the 9th Circuit Thursday, Washington state Solicitor General Noah Purcell said the ruling by the three-judge panel was consistent with previous U.S. Supreme Court decisions, so there was no basis for a review.

Purcell said Trump had campaigned on the promise to ban Muslims from entering the U.S. and one week into office issued the order that "radically changed immigration policy" and "unleashed chaos around the world."

The three-judge panel said the states had raised "serious" allegations that the ban targets Muslims, and it rejected the federal government's argument that courts do not have the authority to review the president's immigration and national security decisions.

The three judges said the Trump administration presented no evidence that any foreigner from the seven countries - Iran, Iraq, Libya, Somalia, Sudan, Syria and Yemen - was responsible for a terrorist attack in the U.S.

In Thursday's filing, the administration said the ban was intended to prevent potential attacks from "nationals of seven countries that were previously found to present uniquely high risks of terrorism."

The ban does not discriminate on the basis of religion because it affects only a fraction of the world's Muslim population and also applies to non-Muslims in those countries, the administration said.

AP writer Martha Bellisle in Seattle contributed to this report.