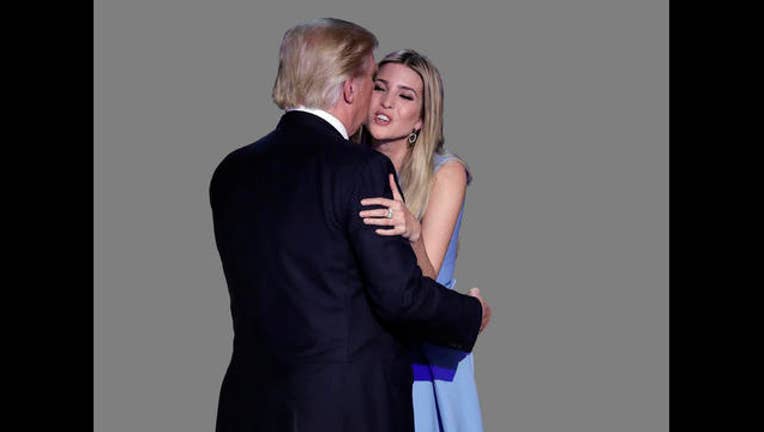 Whereas other presidents took pains to avoid even the appearance of using their office for private gain, Trump is pushing the limits. He met with Indian business partners before his inauguration, and decided to hold on to his company, while expanding his hotel brand.

On Wednesday, he added to a string of presidential firsts, and drew fire from ethics lawyers, with a Twitter attack on Nordstrom. The Seattle-based retailer earned Trump's ire by dropping his daughter Ivanka's clothing and accessory line.

The implication, intended or not: Hurt my daughter's business and the Oval Office will come after you.

"My daughter Ivanka has been treated so unfairly by (at)Nordstrom," the president tweeted. "She is a great person -- always pushing me to do the right thing! Terrible!"

Posted first on his personal account, it was re-tweeted more than 6,000 times in less than an hour. It was also retweeted by the official (at)POTUS account.

Though Trump has tweeted about companies such as Boeing, Carrier and General Motors, ethics experts say this time was different: It involved a business run by his daughter, which raises conflict-of-interest concerns.

Trump's tweet follows revelations that First Lady Melania Trump expected to develop "multi-million dollar business relationships" tied to her presence in the White House, according to a suit she filed on Monday.

Ethics experts have criticized Trump's plan to separate himself from his sprawling real estate business by handing managerial control to his two adult sons. The experts want him to sell his company. Most modern presidents have sold their financial holdings and put the cash raised in a blind trust whose investments remained unknown to them.

Kathleen Clark, a government ethics expert, said the Nordstrom tweet is problematic because other retailers may think twice now about dropping the Ivanka Trump brand for fear of getting criticized publicly by the president. She said it was especially disturbing that Trump retweeted his message on the official White House account.

"The implicit threat was that he will use whatever authority he has to retaliate against Nordstrom, or anyone who crosses his interest," said Clark, a law professor at Washington University in St. Louis.

White House spokesman Sean Spicer said Trump was responding to an "attack on his daughter" when he posted the tweet and that "he has every right to stand up for his family and applaud their business activities, their success."

"This is a shot across the bow to everybody who is doing business with Trump or his family," said Eisen, who was President Barack Obama's chief ethics counselor. "It's warning them: Don't withdraw their business."

Eisen joined with other legal scholars and lawyers to sue the president last month for allegedly violating a clause in the Constitution that prohibits government officials from accepting gifts or payments from foreign governments. Though other legal scholars disagree, Eisen said such payments include foreign diplomats staying at Trump's new Washington D.C. hotel and holding events there and at the other Trump venues.

Trump and his top aides have repeatedly said that Americans do not care about what Eisen and other ethics critics say. "Prior to the election it was well known that I have interests in properties all over the world," Trump wrote on Twitter Nov. 21.

Two surveys released in January show that's not entirely the case. A Quinnipiac University poll found that about 60 percent of registered voters were at least somewhat concerned that the president would "veto a law that would be good for the country because it would hurt his business interests." And a Pew Research Center poll found that 57 percent of American adults were at least somewhat concerned that Trump's businesses could "conflict with his ability to serve the country's best interests."

Yet Trump seems to have calculated that his base of supporters forgives -- and maybe even encourages -- his protective bluster about his family businesses.

Nordstrom reiterated Wednesday that its decision was based on the brand's performance, not politics. The company said sales of Ivanka Trump items had steadily declined over the past year, particularly in the last half of 2016, "to the point where it didn't make good business sense for us to continue with the line for now."

Retailers drop brands all the time because of poor performance, said brand consultant Allen Adamson. But given a highly charged political environment, perception is reality for loyal Trump fans.

"It is clearly hard for Nordstrom to tell the story that it is dropping (the brand) for business reasons," said Adamson, founder of the firm Brand Simple.