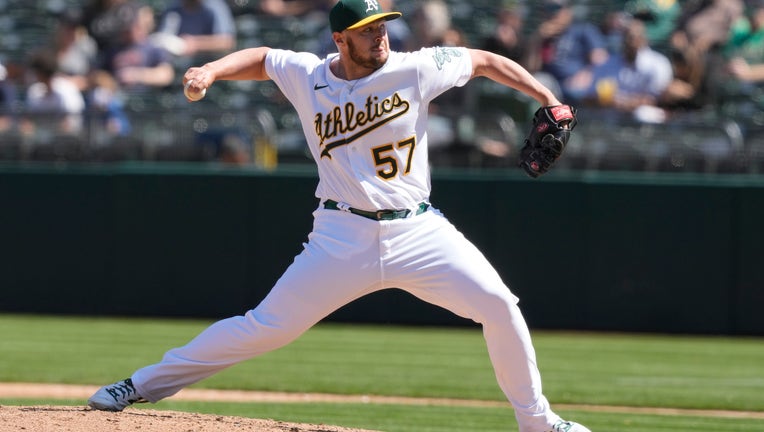 OAKLAND, CALIFORNIA - APRIL 17: J.B. Wendelken #57 of the Oakland Athletics pitches against the Detroit Tigers in the seventh inning at RingCentral Coliseum on April 17, 2021 in Oakland, California. (Photo by Thearon W. Henderson/Getty Images)

OAKLAND, Calif. - The game between Minnesota and the Oakland Athletics scheduled for Monday night at the Coliseum has been postponed because of the Twins’ continued COVID-19 problems.

Major League Baseball made the announcement Sunday and said the delay will allow for continued virus testing and contact tracing. MLB said the Twins and A’s are tentatively scheduled for a straight doubleheader Tuesday as a makeup.

Games between the Twins and the Los Angeles Angels in Anaheim were postponed Saturday and Sunday.

The Twins have had at least four positive coronavirus tests in the past week.

Kyle Garlick, another unnamed Twins player and a team staff member tested positive in the two days before the postponements against the Angels, manager Rocco Baldelli said this weekend. Shortstop Andrelton Simmons already hadn’t made the trip to Anaheim after testing positive early in the week.

Garlick played in the Twins’ 10-3 loss to the Angels on Friday night. The Twins aren’t scheduled to visit Angel Stadium again this season, and the Angels play four games at Minnesota on July 22-25.

There have been six MLB games postponed this year because of the virus, including a season-opening, three-game series between the Nationals and Mets after Washington's coronavirus concerns.

There were 45 regular-season games postponed for virus-related reasons last year, but only two — between St. Louis and Detroit — were not made up.