Tesla CEO Elon Musk has entered into a definitive agreement to buy Twitter Inc. and hopes to turn it into a privatized company.

SAN FRANCISCO - Elon Musk reached an agreement to buy Twitter for roughly $44 billion on Monday, promising a more lenient touch to policing content on the social media platform where he — the world's richest person — promotes his interests, attacks critics and opines on a wide range of issues to more than 83 million followers.

The outspoken Tesla CEO has said he wanted to own and privatize Twitter because he thinks it’s not living up to its potential as a platform for free speech.

Musk said in a joint statement with Twitter that he wants to make the service "better than ever" with new features while getting rid of automated "spam'' accounts and making its algorithms open to the public to increase trust.

"Free speech is the bedrock of a functioning democracy, and Twitter is the digital town square where matters vital to the future of humanity are debated," the 50-year-old Musk said, adding hearts, stars and rocket emojis in a tweet that highlighted the statement. 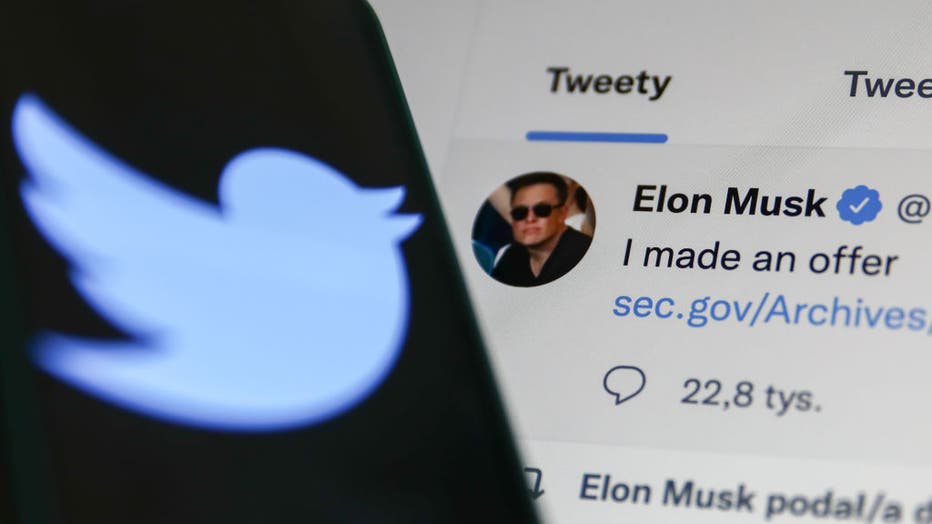 The more hands-off approach to content moderation that Musk envisions has many users concerned that the platform will become more of a haven for disinformation, hate speech and bullying, something it has worked hard in recent years to mitigate. Wall Street analysts said if he goes too far, it could also alienate advertisers.

The deal was cemented roughly two weeks after the billionaire first revealed a 9% stake in the platform. Musk said last week that he had lined up $46.5 billion in financing to buy Twitter, putting pressure on the company’s board to negotiate a deal.

Twitter said the transaction was unanimously approved by its board of directors and is expected to close in 2022, pending regulatory sign-off and the approval of shareholders.

Shares of Twitter Inc. rose more than 5% Monday to $51.70 per share. On April 14, Musk announced an offer to buy Twitter for $54.20 per share. While the stock is up sharply since Musk made his offer, it is well below the high of $77 per share it reached in February 2021.

Musk has described himself as a "free-speech absolutist" but is also known for blocking or disparaging other Twitter users who question or disagree with him.

In recent weeks, he has proposed relaxing Twitter content restrictions — such as the rules that suspended former President Donald Trump’s account — while ridding the platform of fake "spambot" accounts and shifting away advertising as its primary revenue model. Musk believes he can increase revenue through subscriptions that give paying customers a better experience — possibly even an ad-free version of Twitter.

Asked during a recent TED interview if there are any limits to his notion of "free speech," Musk said Twitter would abide by national laws that restrict speech around the world. Beyond that, he said, he’d be "very reluctant" to delete posts or permanently banning users who violate the company's rules.

It won’t be perfect, Musk added, "but I think we want it to really have the perception and reality that speech is as free as reasonably possible."

Elon Musk offers to buy Twitter, take it private after rejecting board seat | LiveNOW From FOX

Tesla CEO Elon Musk offered to buy 100% of Twitter for $54.20 per share and to take the social media company private, according to an SEC filing. The deal would cost him more than $43 billion and he says, if it's not accepted, he'd have to reconsider his position as a shareholder.

After the deal was announced, the NAACP released a statement urging Musk not to allow Trump, the 45th president, back onto the platform.

"Do not allow 45 to return to the platform," the civil rights organization said in a statement. "Do not allow Twitter to become a petri dish for hate speech or falsehoods that subvert our democracy."

As both candidate and president, Trump made Twitter a powerful megaphone for speaking directly to the public, often using incendiary and divisive language on hot-button issues. He was permanently banned from the service in the aftermath of the Jan. 6 storming of the Capitol.

Advertisers, currently Twitter’s main customers, have also pushed for the stronger content rules Musk has criticized. Keeping them happy requires moderation limiting hate speech so that brands aren’t trying to promote their products next to "calls for genocide," said Siva Vaidhyanathan, a media studies professor at the University of Virginia.

"If Musk either fires or drives away the team at Twitter that’s committed to keeping it clean and making it less hate-filled, he’ll see an immediate drop in user activity," said Vaidhyanathan. "I think he’s going to find pretty fast that inviting the bigots back in is bad for business."

Some users said Monday that they were planning to quit the platform if Musk took it over. To which he responded on Twitter: "I hope that even my worst critics remain on Twitter, because that is what free speech means."

Musk has also run into trouble with federal officials as a result of his own tweets, some of which he's used to taunt regulators at the Securities and Exchange Commission.

In one August 2018 tweet, for instance, Musk asserted that he had the funding to take Tesla private for $420 a share, although a court has ruled that it wasn't true. That led to an SEC investigation that Musk is still fighting. More recently, Musk appeared to have violated SEC rules that required him to disclose that he'd acquired a 5% stake in Twitter; instead he waited until he had more than 9%. Experts say these issues aren't likely to affect his Twitter acquisition.

While Twitter’s user base of more than 200 million remains much smaller than those of rivals such as Facebook and TikTok, the service is popular with celebrities, world leaders, journalists and intellectuals. Musk himself is a prolific tweeter with a following that rivals several pop stars in the ranks of the most popular accounts.

Last week, he said in SEC documents that the money would come from Morgan Stanley and other banks, some of it secured by his huge stake in Tesla, the electric-vehicle company he runs.

Musk has a fortune of nearly $268 billion, much of which is tied up in Tesla stock and SpaceX, his privately held space company. It’s unclear how much cash Musk holds.

Musk began making his fortune in 1999 when he sold Zip2, an online mapping and business directory, to Compaq for $307 million. He used his share to create what would become PayPal, an internet service that bypassed banks and allowed consumers to pay businesses directly. It was sold to eBay for $1.5 billion in 2002.

In 2004, Musk was courted to invest in Tesla, then a startup trying to build an electric car. Eventually he became CEO and led the company to astronomical success as the world’s most valuable automaker and largest seller of electric vehicles.

Musk’s pledge to make Twitter a haven for free speech could dim the appeal of Donald Trump’s troubled Truth Social app, which the former president has touted as a competitor to Twitter that would cater to conservatives. Truth Social is part of Trump’s new media company, which has agreed to be taken public by Digital World Acquisition Corp. Shares of DWAC dropped 16.2% Monday and are down 46% since Musk revealed his stake in Twitter.

RELATED: Musk says Tesla will build vehicle designed to be a robotaxi