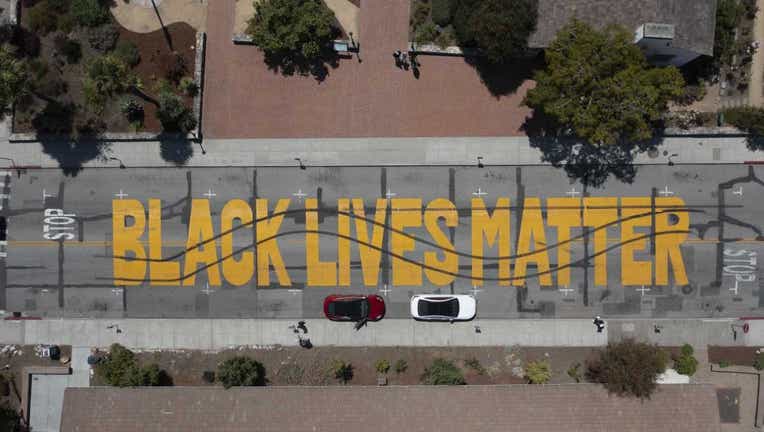 SANTA CRUZ, Calif. - During a community meeting Sunday morning, Santa Cruz city leaders and police said they were appalled by the vandalism of a Black Lives Matter mural in the city's downtown area.

Police chief Andy Mills said his department was working to gather evidence that Friday night's defacement of the mural was not only vandalism but also a hate crime.

At least two other people may have been involved, the chief said Sunday, but they have not yet been arrested.

The chief said he wanted to respond to those who where trying to minimize the vandalism as just kids fooling around.

"Shame on you," Mills said. "Let me assure you that this is a substantial wound to members of our community."

The privately-funded mural in the 800 block of Center Street was approved last year by the Santa Cruz City Council after George Floyd was killed by a Minneapolis police officer.

Sunday's meeting was called to inform the community about the vandalism and the ongoing investigation, Mayor Donna Meyers said.

"The targeted vandalism of the Black Lives Matter mural is heartbreaking and violating," Meyers said, adding that the mural would be repaired as soon as possible.

Friday's vandalism left skid marks the length of the mural that not only damaged the paint but left grooves in the pavement below. Detectives were able to obtain video of the vandalism, showing a vehicle intentionally "burning out" to leaving tire tread marks across the mural, police said.

Answering several community members' questions about why the incident hasn't yet been considered a hate crime, Mills said his department was scouring social media and other evidence to add that charge. It was legally necessary to show that the vandalism's target was racist and not only the Black Lives Matter organization, the chief said.

Some community members told the chief and city leaders that the vandalism wasn't an isolated event and shows a need to fight against racism and white supremacy.

Both suspects were arrested and booked into Santa Cruz County Jail on Saturday and have since been released on bail.