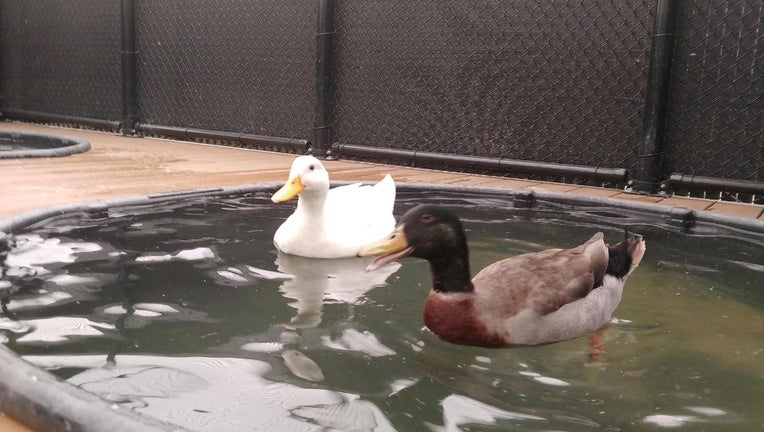 PHS/SPCA announced on Friday that the pair of ducks, named Forest and Meadow, were available for adoption for $20. Forest, a male Mallard duck, and Meadow, a female Peking duck, are a bonded pair.

The ducks survived for 11 days during the fires, which burned 86,509 acres in San Mateo County and Santa Cruz counties. The fires are 97 percent contained as of Friday.

Their owner evacuated but was unable to leave with the ducks. Since the owner lost his home in the fires, he gave them to PHS/SPCA, which pledged to keep the ducks together.

"Forest and Meadow are true survivors of the recent destructive wildfires," PHS/SPCA's Communication Manager Buffy Martin Tarbox said in a statement. Tarbox said it was a miracle that the ducks survived because as pet ducks, they would not have been used to fending for themselves in the wild.

"For 11 days the ducks avoided the fire and smoke, foraging for food and water sources until we were able to rescue them on August 31 with the assistance of other agencies who provided an escort into the evacuated zone," Tarbox said.

When the ducks arrived at the PHS/SPCA shelter, they were covered in soot and ash, dehydrated, underweight and hungry, but Tarbox said they are doing better now.

Anyone interested in meeting the ducks can call (650)340-7022 to schedule an appointment. PHS/SPCA is open by appointment only due to the COVID-19 pandemic.

PHS/SPCA is a nonprofit organization dedicated to animal welfare. They provide care and find homes for sick or injured animals. They provided shelter for 98 companion animals of San Mateo County residents during the CZU fires. Many of the animals have been reunited with their families.