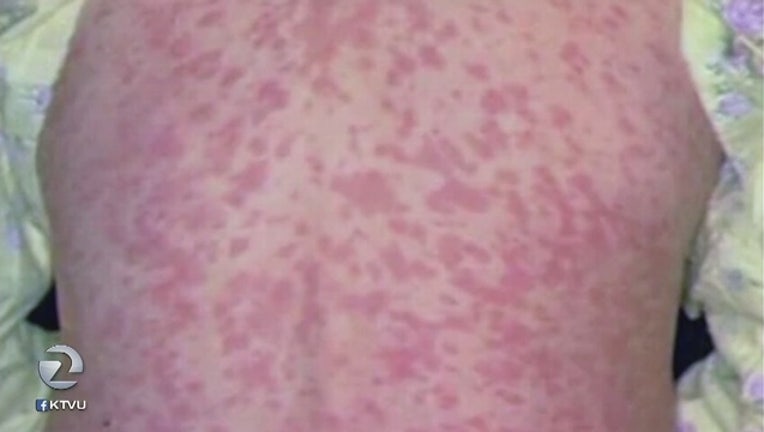 NEW YORK (AP, KTVU) - U.S. measles cases have surged again and are on pace to set a record for most illnesses in 25 years.

Health officials on Monday said 555 measles cases have been confirmed so far this year.

That's up from 465 a week ago, and it's the second-greatest number of cases reported in the U.S. since measles was eliminated in 2000, according to the Centers for Disease Control and Prevention.

Cases of measles have been confirmed in 20 states including California.

The California Department of Public Health said as of April 10, there have been 21 confirmed measles cases, with seven of those in the Bay Area and one in Santa Cruz.

State officials said two outbreaks have been linked to patients who have travelled internationally.

The CDC recommends that all children get two doses of measles vaccine, which is 97% effective.

New York has been the epicenter of the outbreak, with almost two-thirds of all cases coming from that state. It's also where 85% of the latest week's cases are being reported.

Health experts said most of New York's cases have been unvaccinated people in Orthodox Jewish communities.

After the CDC issued its report Monday morning, Iowa officials said they too had seen a case.

Also on Monday, the World Health Organization reported that globally there are four times as many measles cases so far this year as there were at the same time last year.

Over the last year, the largest numbers have been in Ukraine, Madagascar and India, with each reporting more than 60,000 cases.