Full interview: DaVante Williams shares his experience of I-95 shutdown

Uber driver DaVante Williams was stranded with a teenage passenger for hours on the snowy I-95 and went "above and beyond" to get her home safe.

WASHINGTON - An Uber driver, who was one of many people stranded for hours this week along a portion of Interstate 95 in Virginia, is being praised for his determination to get his young rider home safe — and was even offered a new job after going above and beyond.

DaVante Williams sat for 5.5 hours in his vehicle overnight with a teenage passenger, who he described as "emotional" and "overwhelmed" as they faced the gridlock traffic. Unusually heavy snowfall and plunging temperatures had hit the area between Richmond and Washington, D.C., leading to a calamity on the interstate.

Hundreds of people were stuck in their vehicles, including Sen. Tim Kaine, D-Va. Some, like Williams, were stranded overnight into Tuesday morning, although no injuries or deaths were reported.

Williams, who works as a full-time realtor and property manager in Washington, D.C. while driving for Uber and Lyft on the side, said his ordeal began after waking up from a long nap on Monday evening. He opened his Uber Driver app and noticed how there were a lot of opportunities to pick up passengers.

"I didn’t even see anything about the road being closed. I didn’t get any kind of alert on my phone," Williams said, noting how he drives a new truck with all-wheel drive. "There was nothing."

Around midnight on Tuesday morning, Williams set out and picked up three different riders before picking up a teenager trying to head home to Williamsburg, Virginia — some 150 miles away. The girl was originally going to take a train, but it was canceled due to a derailment, so she turned to Uber.

Williams said he picked her up at Union Station, they got onto I-95 and about 20 miles into their journey, near Lorton, everything came to a stop. He made some attempts to get off the highway but was ultimately directed back to the standstill traffic on the interstate.

"So, I get back on 95, and in my mind, I’m just saying, ‘Maybe this is a little fender bender. It will be all over shortly,’" Williams recalled. "One hour went by, two hours went by..."

Sitting there with nowhere to go, both called loved ones and friends. Williams said he had drinks and some snacks in his truck and that his vehicle is good on gas — but he did start to get concerned about fuel as the clock ticked.

Williams said his young rider was "very, very emotional" after first having attempted to get home on a canceled train ride, only to become stranded on the highway. He said he spoke to her parents to let them know he would take care of their daughter.

"She would call her mother or call her father here and there to communicate what was going on," Williams said. "She was overwhelmed, and I totally understood because all she wanted to do was get home." 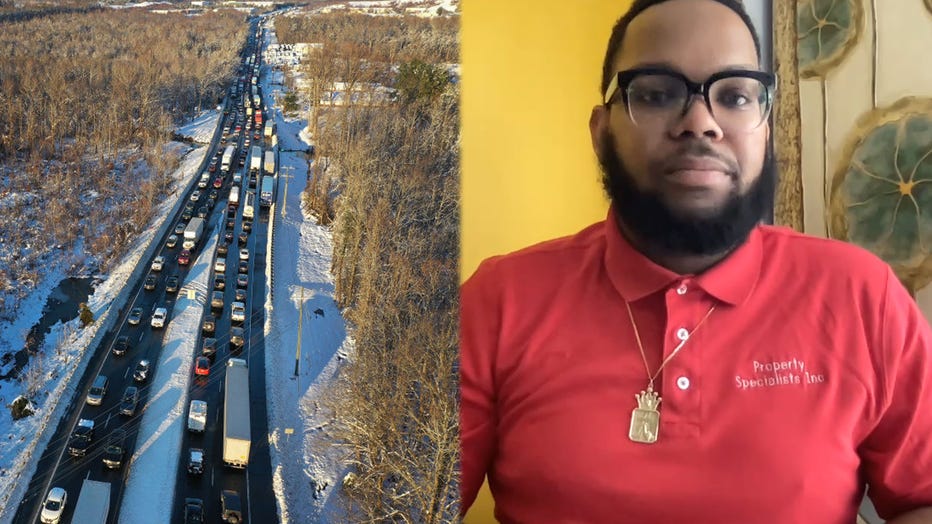 (L) In an aerial view, traffic creeps along Virginia Highway 1 after being diverted away from I-95 after it was closed due to a winter storm on Jan. 4, 2022, near Fredericksburg, Virginia. (R) DaVante Williams, an Uber drier who became stranded with

Ultimately, Williams was determined to get both of them home and ended up finding a way to exit the freeway around 7:30 a.m. the next morning. Exhausted from sitting in traffic all night and still a long way from home, Williams booked a hotel room for the young rider at around 8:15 a.m. to get some sleep and make alternative travel plans.

He even offered to drive her the rest of the way home once the roads were clear, at no charge. Ultimately, a family friend was able to pick her up and drive her safely home — finally.

"I’m happy it was me that was her driver. Any other driver, I’m not sure what would have happened," Williams said. "And based on her energy and her presence, I felt I was put there for a reason... to do what I did."

"We’re currently dealing with a pandemic and so many other things, people are mentally overwhelmed," he added.

Williams’ story was shared by Uber later that day in a tweet, which wrote: "Not all heroes wear capes."

An Uber representative later called Williams on Thursday morning, thanking him as one of their drivers and asking for a receipt of the hotel room to reimburse him, he said.

"Mr. Williams went above and beyond during this very stressful situation, and we thank him for his thoughtful actions," an Uber spokesperson told FOX Television Stations in a statement.

All the attention after the traffic incident even led him to be offered a part-time role as a "lead driver" for Ride Alto, where he’ll be in a "supervising, managing role." Alto describes itself as an "upscale ride-sourcing service," which currently operates in Dallas, Houston, Los Angeles, Miami and D.C.

"It’s an office job... we’re working out the logistics of it," Williams added.

Many stories have come to light after the I-95 shutdown. Another Uber rider was hit with a $600 bill, which was ultimately refunded by the company. Some were captured helping their fellow drivers during the unfortunate circumstance, including a Baltimore bakery truck driver who passed out bread to stranded drivers.

As for Williams, he said the experience made him think more about preparation before he hits the road.

"In the future, I think maybe I would take extra steps to research what (the weather) outside is like and then make a determination from there," he said.