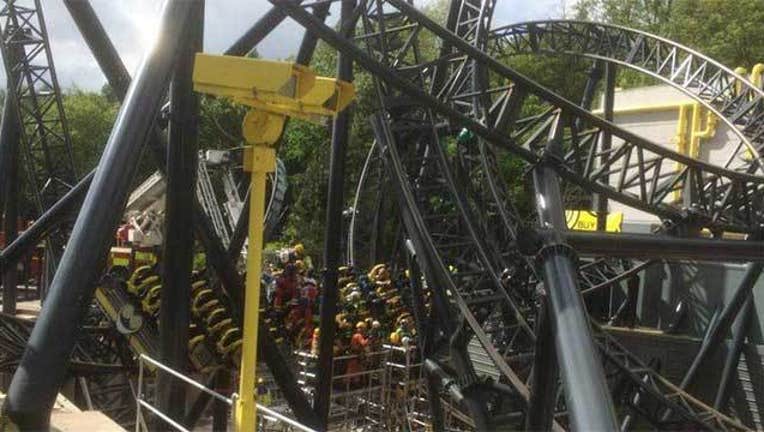 Work to evacuate the passengers was still underway three hours after the crash.

The ambulance service said the four were being treated at the scene and would be transported to trauma centers by helicopter. It said the other 12 people onboard were not believed to be seriously hurt.

Musician and radio broadcaster Danny Simm tweeted that he saw "people unconscious, knocked out. Blood everywhere. It really was shocking."

Alton Towers, 150 miles (240 kilometers) north of London, is one of Britain's most popular tourist attractions. The park said there would be "a full investigation once all the guests have been evacuated, which is our priority."

A platform was built to help paramedics and firefighters reach the riders, who were stuck in their seats at roughly a 45-degree angle.

Visitors to Alton Towers said the Smiler closed down earlier in the day because of technical problems, but had reopened before the crash.

The Smiler is billed as the world's first roller coaster with 14 loops. Alton Towers says it features "a series of twisted psychological effects including optical illusions, blinding lights and near misses designed to mess with your mind."

It opened in May 2013, two months later than scheduled, and has twice been shut down because of technical or mechanical problems.