Ukrainian defense volunteers in Kharkiv were captured on May 17, 2022, looking after "pets of families who evacuated" the residential area of Saltivka.

KHARKIV, Ukraine - Ukrainian defense volunteers were captured feeding family pets left behind in Kharkiv after their owners were forced to evacuate amid Russia’s ongoing war in the country.

In a video shared on May 17, 2022, the service members are seen in the residential neighborhood of Saltivka feeding several cats. This particular neighborhood has been "heavily shelled" during the Russian assault, according to freelance journalist Sergio Olmos, who captured the footage.

"Ukrainian territorial defense volunteers have been coming to look after the pets of families who evacuated," Olmos wrote in a tweet.

During the video, a voice describes one of the cats as being "expensive" compared to the others.

Kharkiv, Ukraine’s second-largest city that is located near the Russian border, has undergone weeks of intense shelling. But Russian troops were withdrawing from around the city in recent days and instead focusing on guarding supply routes, while launching mortar, artillery and airstrikes in the eastern province of Donetsk, according to the Ukrainian military. 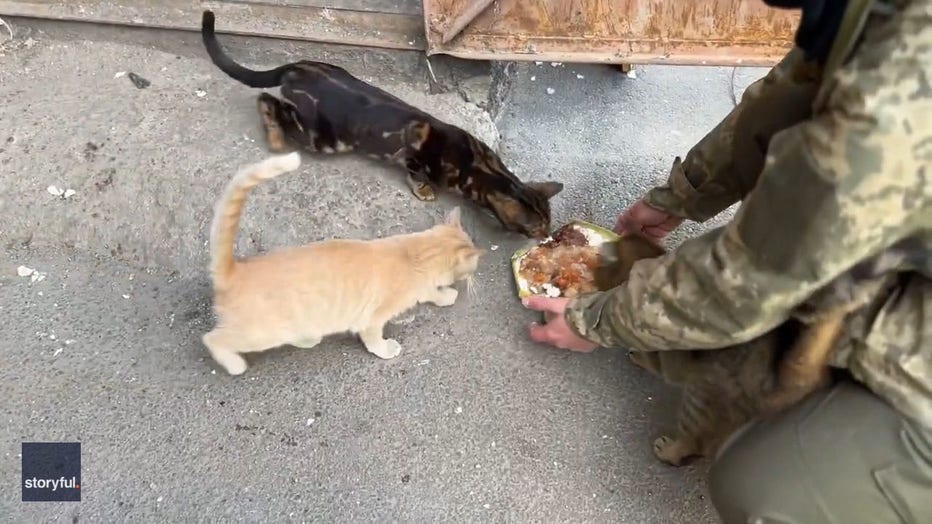 A screengrab from a video shows some of the cats being fed in Kharkiv’s residential area of Saltivka, Ukraine, on May 17, 2022. (Credit: Sergio Olmos via Storyful)

After failing to capture the capital of Kyiv following the Feb. 24 invasion, Russian President Vladimir Putin has shifted his focus eastward to the Donbas area, an industrial region where Ukraine has battled Moscow-backed separatists since 2014.

Kharkiv, a largely Russian-speaking city with a prewar population of 1.4 million, had once been a key military objective earlier in the war when Moscow hoped to capture and hold major cities.

Ukraine "appears to have won the Battle of Kharkiv," the Institute for the Study of War, a Washington-based think tank, said on May 14. "Ukrainian forces prevented Russian troops from encircling, let alone seizing Kharkiv, and then expelled them from around the city, as they did to Russian forces attempting to seize Kyiv."

Meanwhile, Ukrainian troops in Mariupol made a stand inside the port city’s bombed-out steel plant for weeks until this week, when troops began surrendering on orders from above to save their lives.

Military personnel, at least 53 of whom were said to be seriously injured, have been evacuated from the Azovstal steel plant in Mariupol, Ukraine’s Defense Ministry said on May 16. (Credit: Zvezda News via Storyful)

The Russian military said a total of 1,730 Ukrainian troops at the Azovstal steel plant have surrendered since Monday. At least some were taken by the Russians to a former penal colony in territory controlled by Moscow-backed separatists. A separatist official said others were hospitalized.

The International Committee of the Red Cross said that it has registered hundreds of POWs from the plant under an agreement between Russia and Ukraine. It did not say whether it had visited the prisoners.