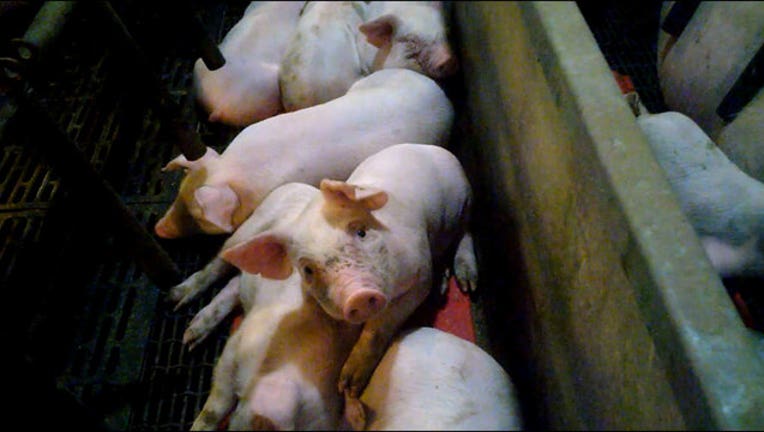 The group says the investigator, posing as an employee, documented “malicious and systemic abuse” of mother pigs and piglets.

In addition to what they call violent assaults on pigs, the footage shows mother pigs confined for nearly their entire lives to metal cages so small the animals couldn’t turn around or lie down comfortably, workers smashing the heads of piglets against the ground to kill them, and workers ripping out the testicles of piglets without any pain relief.

“Right now not a single federal law that protects animals from abusive treatment during their lives on the farm,’’ said Mercy For Animals spokesman Kenny Torrella. “It’s up to states like California and California voters to take the lead by setting meaningful standards to prevent these indefensible acts of farmed animal cruelty.”

Tosh Farms did not respond to a request for comment from KTVU.

But in a statement, JBS USA said that based on an initial review of the video, the company has suspended shipments from Tosh Farms pending a full investigation.

"We expect all livestock to be handled in a safe and humane manner throughout our supply chain. Animal welfare is a priority for our company and our customers,'' the statement says. "We will ensure that all of our suppliers adhere to our high standards for animal care."

Mercy For Animals said it released the video to show California voters what’s at stake if they don’t approve Proposition 12 on the Nov. 6 ballot.

The measure would ban the sale of meat from breeding pigs and calves raised for veal that are confined in areas below 24 feet and 43 feet, respectively. The measure would also mandate that egg-laying hens live in cage-free housing by 2022.

“Californians know that locking farm animals in tight cages for the duration of their lives is cruel and compromises food safety,” Wayne Pacelle, president and CEO of The Humane Society of the United States, said in a statement after the society and a coalition of animal protection, veterinary and food safety groups introduced the measure last year.

“Proposition 12 would end the era of caged confinement in California once and for all and would become the strongest animal protection law in the nation, banning the sale of pork, eggs, and veal from animals crammed in tiny cages at factory farms,’’ Torrella said.

Proposition 12 comes ten years after voters overwhelmingly passed Proposition 2 to ban the extreme confinement of farmed animals in California. But Torrella said most pork sold in the state still comes from out-of-state farms that abuse pigs in ways that would be illegal if they were raised in California.

California consumers could have a lot at stake as the state relies heavily on out-of-state pork, according to the national Pork Checkoff, which lists California as 27th in national pork production, producing less than 2 percent of all U.S. pork.