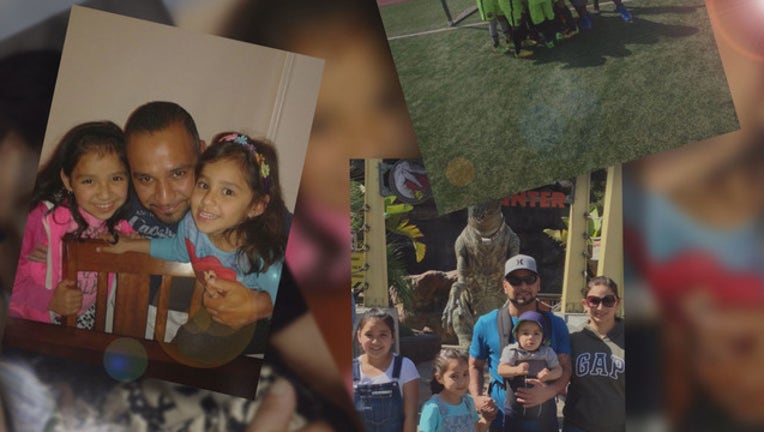 OAKLAND, Calif. - In what could be the first legal test of its kind under the Trump Administration, attorneys for an undocumented immigrant in Oakland are trying to declare him the victim of a crime because he was held for too long in an ICE detention center.

But the U.S. Attorney’s Office is arguing that Ricardo Mercado-Guillen, 39, a father of three and featured this year in a special KTVU report, is certainly no victim and should be deported right away.

In fact, Mercado has been ordered twice to be deported since he came here 22 years ago when he was 17 years old from Mexico. And he was under a final deportation order when he picked up on July 11, 2017 and taken to the now-closed ICE center at the West County Detention Facility in Richmond.

On April 18, a Northern District U.S. District Court judge found that Mercado had been unlawfully detained and had not received a bond hearing after six months behind bars.

A few days later, Mercado was released on $5,000 bond, nine months after ICE took him into custody.

He returned to his wife and children, and to his job, working at the Royal Coffee warehouse.

Now his lawyer, Kevin Crabtree, is arguing that Mercado was the victim of “false imprisonment.” And the perpetrators in this case, Crabtree alleges, are ICE agents.

Crabtree is trying to get his client a U-Visa, which has traditionally been given out to crime victims by police agencies who need undocumented immigrants to testify and help them solve cases. He said that Mercado is eligible for a U-Visa because he was the victim of a crime – being held in an ICE detention center too long. “They had no authority to hold him anymore,” Crabtree said.

Crabtree points to a 2014 case where a federal judge ruled that Juana Villegas, an undocumented immigrant, was eligible for a U-Visa because she was forced to give birth in ICE custody.

Immigrant rights advocate Elliott Ozment told the Nashville Scene that this was the first case in history in which a federal judge entered an opinion certifying a U-Visa for an immigrant based on prima facie violations of that immigrant's civil rights and conspiracy to violate those civil rights.

Federal prosecutors do not see any similarities between the case of the pregnant inmate and  Mercado's situation.

In court papers, Asst. U.S. Attorney Adrienne Zack argued that Mercado was not a victim of any crime.

“Moreover, petition’s novel attempt to equate the circumstances that lead (sic) this court to issue a writ of habeaus corpus to a criminal offense also fails because respondents’ conduct does not constitute a criminal offense,” Zack wrote. “It’s misguided to conflate a civil legal violation with criminal liability.”

U-Visa applicants must show they have suffered substantial physical or mental abuse as a result of having been a victim of qualifying crimes, have credible information related to a crime, or have helped law enforcement investigate crime, Zack argued in court papers. And Mercado, Zack wrote, fits none of those criteria.

Zack also told the judge that it appears as though this is a “last resort to prevent his removal from US after multiple immigration violations.”

A hearing on Mercado's case is scheduled for Dec. 6.