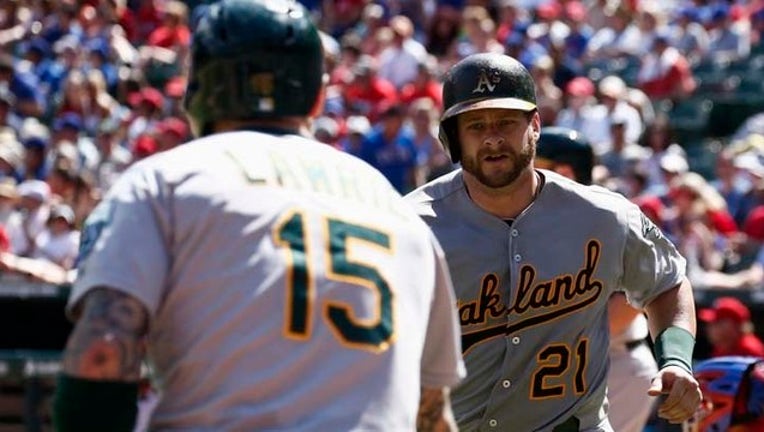 ARLINGTON, Texas (AP) — Sonny Gray had a career-high seven walks against Texas when the Oakland right-hander never had more than four in an outing and came into the game with just six all season.

"So is 10 punches. I don't strike people out, neither," Gray said after overcoming the control issues to take a shutout into the seventh inning while Stephen Vogt homered twice in the Athletics' 7-1 victory against the Rangers on Sunday.

The 10 strikeouts were a season high, and two shy of the only other time he had that many last September against the Los Angeles Angels. Those, along with allowing just two hits, helped Gray (4-0) extend his scoreless streak against Texas to 23 2-3 innings over three starts.

Gray also hit a batter and threw a wild pitch, but still reached six wins against Texas, the most of any opponent for the 25-year-old.

"You just have some days when you pick the ball up and you know it's going to be a battle," said Gray, who allowed two hits in 6 2-3 innings. "You've just got to grind through."

Vogt, who had a career-high four RBIs, hit a solo shot in the sixth. He added his sixth homer of the season, a three-run drive in the seventh right after Texas reliever Alex Claudio entered for a lefty vs. lefty matchup.

The Rangers stranded 14 runners, including Shin-Soo Choo at third with no outs in the fourth. Milwaukee's 5-3 win over Chicago on Sunday left Texas as the only team in the majors without consecutive victories.

"It's not the start that we want," said Gallardo, who allowed four runs — three earned — on seven hits and four walks in 6 2-3 innings, with just one strikeout. "But there's not much you can do other than keep battling and keep working hard like the guys are doing in this clubhouse."

With a 5-0 lead thanks to Vogt's second homer, Oakland manager Bob Melvin stuck with Gray after consecutive walks to Elvis Andrus and Prince Fielder with one out in the seventh. Gray struck out Adrian Beltre on his 119th pitch — another career high — before Dan Otero came on to get Choo on a flyout.

Oakland's Josh Reddick extended his career-best hitting streak to 11 games with a single in the seventh and had a two-run homer in the ninth.

Reddick's grounder to Andrus in the fifth gave the A's a 1-0 lead when the Texas shortstop knocked down the one-hopper but bounced the throw to first, allowing Eric Sogard to score. The Rangers matched Washington with a majors-leading 24 miscues.

Chad Smith, called up from Triple-A Nashville earlier in the day, had two walks to give Oakland nine for the game. He pitched a scoreless eighth but was pulled with the bases loaded and no outs in the ninth. Choo's sacrifice fly prevented the shutout.

Oakland outfielder Craig Gentry, who started his career with the Rangers, was ejected by home plate umpire Andy Fletcher without even appearing on the field. He was in the dugout when Sam Fuld was called out on strikes to end the fourth.

Vogt had the second multihomer game of the season — and his career. The other was April 17 at Kansas City. Reddick homered for the second straight day and had two homers and eight RBIs in the three-game series.

Athletics: CF Coco Crisp (right elbow surgery) was scheduled to play seven innings in left field for Class A Stockton on Sunday. ... LHP Eric O'Flaherty (left shoulder strain) was to have an MRI exam Sunday before a visit Monday with team orthopedist Dr. Jon Dickinson. ... LHP Sean Nolin (sports hernia surgery) threw 25 pitches on the side Saturday after a setback with an oblique strain.

Rangers: RHP Yu Darvish is out of a brace after season-ending elbow reconstruction surgery and moving on from range-of-motion exercise to work on his shoulder and forearm.

Athletics: RHP Jesse Hahn (1-1, 2.86) starts the opener of a four-game series in Minnesota. He lost his only career start against the Twins last year with San Diego.

Rangers: LHP Ross Detwiler (0-3, 8.66) makes his fifth start for Texas in a series opener at Houston, which has won 10 straight.