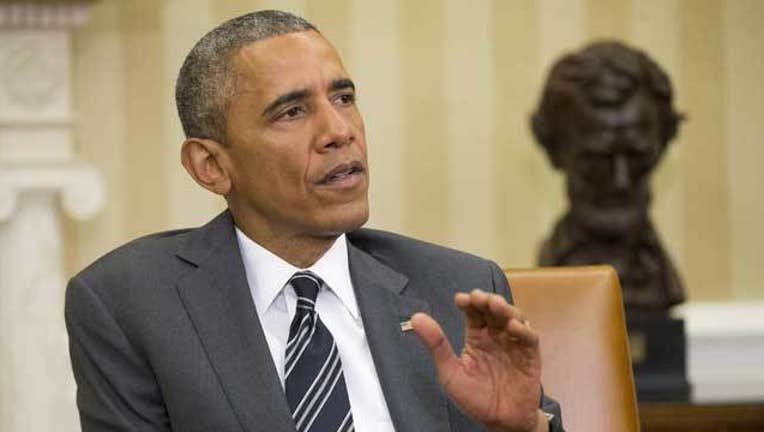 WASHINGTON (AP) — President Barack Obama ordered the deployment of up to 450 more American troops to Iraq on Wednesday in an effort to reverse major battlefield losses to the Islamic State, an escalation but not a significant shift in the struggling U.S. strategy to defeat the extremist group.

The U.S. forces will open a fifth training site in the country, this one dedicated specifically to helping the Iraqi Army integrate Sunni tribes into the fight, an element seen as a crucial to driving the Islamic State out of the Sunni-majority areas of western Iraq.

The immediate objective is to win back the key city of Ramadi, which was seized by extremists last month.

The U.S. is insistent that Americans will not have a combat role. But in the deployment of American forces and the equipping of Iraqi troops, the U.S. must make sure "that we can be nimble because clearly this is a very nimble enemy," Deputy National Security Adviser Benjamin Rhodes told reporters.

The plan is not a change in the U.S. strategy, the administration says, but addresses a need to get Sunnis more involved in the fight. Some local citizens in Sunni-majority areas fear an invasion and reprisals from Iran-backed Shiite militia even more than domination by the Islamic State, underscoring a need for any military campaign there to be led by local fighters.

But the Shiite-led Iraqi government's record in recruiting Sunni tribesman has been mixed at best, slowing efforts to regain Ramadi and Fallujah, a nearby city that Islamic State militants have held for more than a year. Iraqi leaders fear that Sunni fighters, once armed, could turn against the government, and they have deployed most U.S.-trained Iraqi troops in defensive formations around Baghdad, the capital.

Obama this week lamented that the U.S. lacks a "complete strategy" for defeating the Islamic State, and officials pointed to a glaring lack of recruits among Sunnis. Wednesday's announcement of a new training site at al-Taqaddum, a desert air base that was a U.S. military hub during the 2003-2011 war, is designed to fix that. The additional troops will include advisers, trainers, logisticians and security personnel.

But the changes don't go nearly far enough for critics of the administration's approach. They have pressed for military coordinators and advisers closer to the front lines to augment the U.S. airstrike campaign.

House Speaker John Boehner, R-Ohio, said Wednesday that sending several hundred military advisers to Iraq "is a step in the right direction," but he criticized Obama for not having "an overarching strategy." Sen. John McCain of Arizona, the Republican chairman of the Armed Services Committee, was harsher in his assessment: "This is incremental-ism at its best or worst, depending on how you describe it."

Wednesday's careful escalation illustrated Obama's reluctance to plunge the U.S. too deeply into the fighting and his opposition to reintroducing U.S. soldiers into a war he had vowed to bring to an end.

Still, even some Democrats were concerned with the steps announced.

"Absent significant reform, we can help the Iraqi forces win battles, but they will not stay won," said Rep. Adam Schiff of California, the House Intelligence Committee's top Democrat. He took issue with Obama expanding the U.S. role in Iraq while the war still lacks congressional authorization, and he said it was up to Abadi's government to give Sunnis a greater voice in the running of their country.

There now are nearly 3,100 U.S. troops in Iraq involved in training, advising, security and other support. In addition to bombing missions, the U.S. is conducting aerial reconnaissance and intelligence-gathering missions against Islamic State forces, while counting on Iraqi troops to do the fighting on the ground. Counterterrorism efforts in Syria, where the Islamic State has a greater foothold, are much less far along.

In Syria, an American fighting with Kurdish forces against the Islamic State group was killed in battle, authorities said Wednesday. With no connection to the U.S. military, he was probably the first American to die fighting alongside the Kurds against the extremists.

Keith Broomfield of Massachusetts died June 3 in a battle in a village near the border town of Kobani, said Nasser Haji, an official with a group of Kurdish fighters known as the YPG. Broomfield had joined the YPG on Feb. 24 under the nom de guerre Gelhat Raman, Haji said.

The fight against the Islamic State group has attracted dozens of Westerners, including a number of Iraq war veterans who have made their way back to the Middle East to join Kurdish fighters, who have had the most success.

As for the fresh U.S. military troops, Obama's decision amounts to an acknowledgment by the administration that it has not been swift enough to respond to Iraqi military limitations and Islamic State inroads.

"We have seen shortfalls in elements of Iraqi capacity," Rhodes said. "I think the Iraqi government itself recognizes that. Part of the question that we're trying to answer here is how do we have a better ability to move quicker when we see those shortfalls."

Brett McGurk, the U.S. deputy special presidential envoy for the global coalition to counter the Islamic State, said al-Taqaddum's strategic location and the coordination of Iraqi units and tribal fighters will "greatly improve our ability to turn around airstrikes at a pretty fast clip."

The mission there will be more about advising Iraqi forces on operations against the Islamic State militants in Anbar than about providing individual troop training, said Col. Steve Warren, a Pentagon spokesman.

The expanded effort also will include delivering U.S. equipment and arms directly to al-Taqaddum, under the authority of the government in Baghdad. Thus it will not represent a change in the U.S. policy of providing arms only through the central government, a source of frustration for some Sunni tribal leaders who say they've been kept away from the best equipment.