The team was preparing for a highly coveted $1 million prize in a race happening Saturday and Sunday in San Francisco. During the practice run, their F50 catamaran overturned, according to team officials.

"It was insane, we went so fast," said surfing legend Kai Lenny. "I don’t know if anyone really realizes watching from land, just how intense it is on those boats."

The culprit for the capsize was a systems issue that caused the wing sail to not invert properly, according to Team CEO Jimmy Spithill.

When Spithill initiated a maneuver, the race boat heeled over and overturned, right in front of Alcatraz Island. 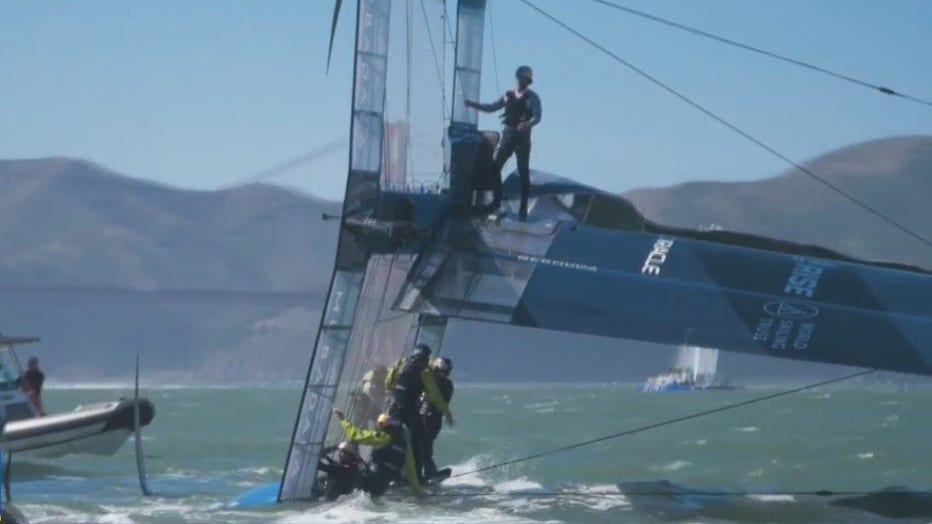 The US SailGP catamaran capsized Monday, March 21 while practicing for $1 million championship.

"There is so much going on, you’re pulling three Gs of force from side to side, said Lenny. "The boat is a living breathing creature, and you can feel the vibration of it as you go through the wave chop and the gusts of wind."

"That whole experience was absolutely so fun and just as I was getting used to running across the trampoline from side to side, we ended up capsizing," said Lenny.

All athletes were safe following the incident, and the team’s catamaran sustained minimal damage.

Following system checks, the team is expected to resume training on Tuesday, according to US SailGP officials.

The official race will happen in the Bay between the Golden Gate Bridge and Alcatraz Island, and spectators can watch from Marina Green. The event begins at 2 p.m., Saturday and Sunday.