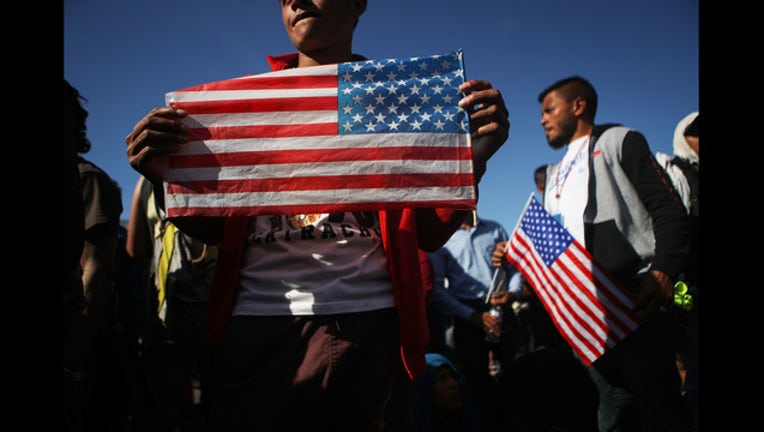 TIJUANA, MEXICO - NOVEMBER 25: Migrants hold American flags during a peaceful march shortly before some evaded a police blockade and rushed toward the El Chaparral port of entry on November 25, 2018 in Tijuana, Mexico. U.S. Customs and Border Protect

HOUSTON (AP) - President Donald Trump's administration on Tuesday said it would appeal a judge's order barring it from enforcing a ban on asylum for any immigrants who illegally cross the U.S.-Mexico border, after the president's attack on the judge prompted an extraordinary rebuke from the nation's chief justice.

The Justice Department filed a notice Tuesday saying it will appeal the order to the 9th U.S. Circuit Court of Appeals. It also asked the judge to stay his order pending the appeal.

Trump criticized the 9th Circuit before the filing as biased and dismissed the judge who ruled against him -- an appointee of Trump's predecessor -- as an "Obama judge."

Chief Justice John Roberts responded with a statement that the federal judiciary doesn't have "Obama judges or Trump judges, Bush judges or Clinton judges." It was the first time Roberts has hinted at any criticism of the president, as judges ordinarily avoid making any public statements on politics.

Roberts and the rest of the Supreme Court may end up deciding the asylum case. The 9th Circuit, seen as liberal leaning, has already ruled against Trump in several major immigration cases.

Trump issued the proclamation in response to the caravans of migrants approaching the border that he's claimed are a national security threat.

But Tigar sided with legal groups who sued hours after the proclamation was issued. The groups argued that federal law unambiguously says immigrants in the United States can request asylum regardless of whether they entered the country lawfully.

"Whatever the scope of the President's authority, he may not rewrite the immigration laws to impose a condition that Congress has expressly forbidden," the judge said in his order.

In issuing the proclamation, Trump invoked the same national security powers that he used to impose a travel ban on citizens of countries with overwhelmingly Muslim populations.

The 9th Circuit ruled the administration couldn't withhold money from so-called "sanctuary cities," end the Deferred Action for Childhood Arrivals program for younger immigrants brought to the U.S. by their parents or impose the travel ban.

In the case of the travel ban, the Supreme Court ultimately reversed the 9th Circuit's decision when it ruled that Trump had the authority to impose it.

Asylum is intended for people who have fled their countries of origin because they have suffered persecution or fear that they will be persecuted if they are forced to return.

Crossing the U.S.-Mexico border between ports of entry is a federal crime, but that does not typically preclude someone from requesting asylum. Tigar noted that federal law says someone may seek asylum if they have arrived in the United States, "whether or not at a designated port of arrival."

By the estimates of the Department of Homeland Security, around 70,000 people a year claim asylum after crossing illegally. DHS alleges that many of those people make false claims and take advantage of loopholes in the system.

Meanwhile, at least 3,000 people have arrived in Tijuana, Mexico, across the border from San Diego, California, with hopes of requesting asylum at a port of entry there. DHS has said it's prepared for as many as 10,000 or more people to arrive in various caravans.

Crossing the U.S.-Mexico border between ports of entry is a federal crime, but that does not typically preclude someone from requesting asylum. Tigar noted that federal law says someone may seek asylum if they have arrived in the United States, "whether or not at a designated port of arrival."

But illegal crossings overall are well below the historical highs from previous decades.