President Joe Biden spoke Friday after America’s employers added just 235,000 jobs in August, a modest gain after two months of robust hiring at a time when the delta variant’s spread has discouraged some people from flying, shopping and eating out.

WASHINGTON -  The number of Americans seeking unemployment benefits fell last week to 310,000, a pandemic low and a sign that the surge in COVID-19 cases caused by the delta variant has yet to lead to widespread layoffs.

Thursday’s report from the Labor Department showed that jobless claims dropped from a revised total of 345,000 the week before. And at their current pace, weekly applications for benefits are edging toward their pre-pandemic figure of roughly 225,000.

But the spread of the delta variant this summer has put renewed pressure on the economy and the job market. On Wednesday, the Federal Reserve reported that U.S. economic activity "downshifted" in July and August, in part because of a pullback in dining out, travel and tourism-related to concerns about the delta variant.

Still, the ongoing drop in applications for unemployment aid — six declines in the past seven weeks — indicates that most companies are holding onto their workers despite the slowdown. That trend should help sustain the economic rebound through the current wave of infections.

The pace of hiring, though, has weakened — at least for now. Last week, the government reported that hiring slowed dramatically in August, with employers adding just 235,000 jobs after having added roughly a million in both June and July. Hiring plummeted in industries that require face-to-face contact with the public, notably restaurants, hotels and retail. Still, some jobs were added in other areas, and the unemployment rate actually dropped to 5.2% from 5.4%.

"While the August jobs report showed employers may have hit the pause button on hiring amid renewed concerns about the pandemic, the claims data suggest a reluctance to lay off workers amid a record number of job openings," said Nancy Vanden Houten, an economist at the consulting firm Oxford Economics. 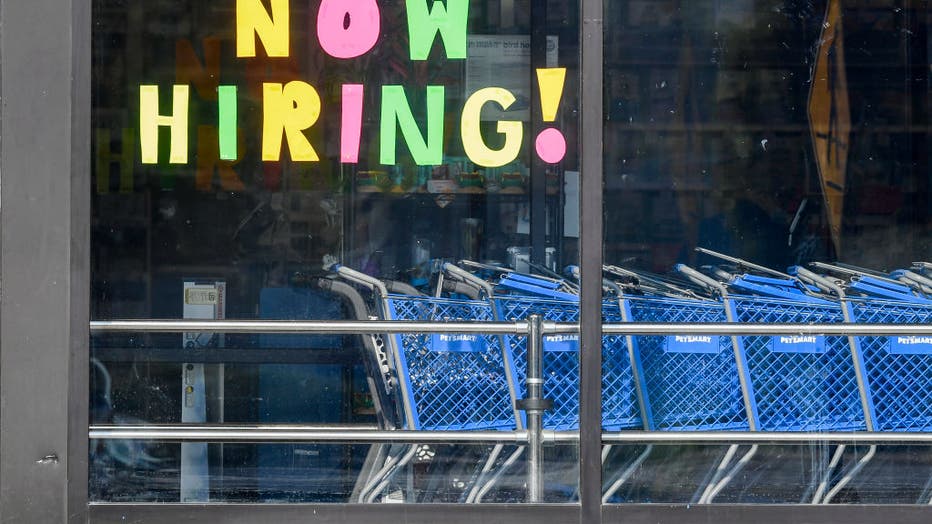 FILE - A sign that reads "Now Hiring!" in the window of the PetSmart location along 5th Street Highway on Aug. 26, 2021, in Muhlberg, Pennslyvania. (Photo by Ben Hasty/MediaNews Group/Reading Eagle via Getty Images)

The steady fall in weekly applications for unemployment benefits coincides with a scaling-back of aid for jobless Americans. This week, more than 8 million people lost all their unemployment benefits with the expiration of two federal programs that covered gig workers and people who have been jobless for more than six months. Those emergency programs were created in March 2020, when the pandemic first tore through the economy.

That cutoff isn't yet reflected in the weekly jobless claims report. The report's data on the emergency programs is delayed by two weeks. As of Aug. 21, 8.8 million people were receiving benefits from these two programs.

Those cutoffs could also be a reason why applications for jobless aid are declining, said Eliza Forsythe, an economist at the University of Illinois at Urbana-Champaign: Many of the unemployed may now believe they aren’t eligible for aid.

Some business owners had complained that the federal supplement made it harder to fill open jobs. Those pleas led governors in about 25 states to cancel the $300 payment early and to shut off the two emergency programs in most of those states as well. But academic research has found that so far, the early cut-offs in jobless benefits have led to only a small increase in hiring in those states.

Many economists express concern that the cut-off will lead to financial hardship because the resurgence of the pandemic will make it harder for some of the unemployed to find work. After previous recessions, emergency expansions of jobless aid ended at a time when far fewer people were still receiving benefits.