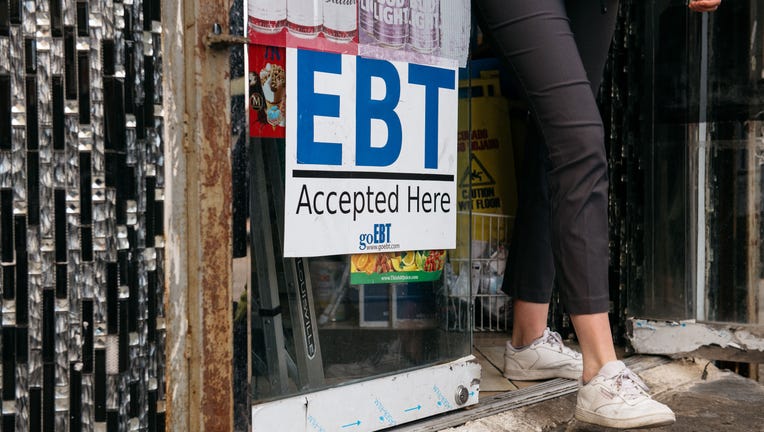 DECEMBER 05: A sign alerting customers about SNAP food stamps benefits is displayed at a grocery store on December 5, 2019. (Photo by Scott Heins/Getty Images)

Roughly 1 million state residents will have access to emergency food benefits following a settlement reached this week in a lawsuit filed last year against the U.S. Department of Agriculture.

Two plaintiffs, California residents Robin Hall and Steven Summers, filed the suit last May after they were denied emergency Supplemental Nutrition Assistance Program benefits because they already received the maximum monthly SNAP benefit amount, which was then $194.

As part of the settlement, the USDA will be required to pay at least $95 in emergency benefits per month to each household already receiving monthly SNAP benefits, regardless of the size of their existing monthly benefits.

"Even before the pandemic, I worked hard to stretch my monthly SNAP benefits to meet my food needs. The pandemic made it much harder to get regular meals," Hall said in a statement. "This emergency assistance will be a huge help to me and many others."

Federal legislators, in the early days of the pandemic last year, authorized the USDA to approve states' requests to increase SNAP benefits.

However, the USDA did not approve California's initial emergency funding request for SNAP, known as CalFresh in the state, because it included emergency funds for beneficiaries receiving the monthly maximum.

The USDA eventually approved California's request only after it removed households receiving the monthly maximum benefits, which prompted the lawsuit from Hall and Summers.

After taking office in January, President Joe Biden signed an executive order imploring the USDA to extend SNAP benefits to all households in the program. The expansion of emergency benefits will support an estimated 12 million people.

The Impact Fund and the Western Center on Law and Poverty represented the two plaintiffs in the suit, which they filed in the U.S. District Court for the Northern District of California in Oakland.

"The past year has been incredibly hard for people with very low incomes," said Alexander Prieto, a senior litigator with the Western Center on Law and Poverty. "This settlement and USDA's new guidance is a step in a different direction, and we hope for continued efforts to expand, rather than take away, vital safety net programs."