WASHINGTON - The U.S. Postal Service is warning states coast to coast that it cannot guarantee all ballots cast by mail for the November election will arrive in time to be counted, even if mailed by state deadlines, raising the possibility that millions of voters could be disenfranchised.

Voters and lawmakers in several states are also complaining that some curbside mail collection boxes are being removed.

Even as President Donald Trump rails against widescale voting by mail, the post office is bracing for an unprecedented number of mail-in ballots as a result of the coronavirus pandemic.

The warning letters sent to states raise the possibility that many Americans eligible for mail-in ballots this fall will not have them counted. But that is not the intent, Postmaster General Louis DeJoy said in his own letter to Democratic congressional leaders.

The post office is merely “asking elected officials and voters to realistically consider how the mail works, and be mindful of our delivery standards, in order to provide voters ample time to cast ballots through the mail," wrote DeJoy, a prominent Trump political donor who was recently appointed. 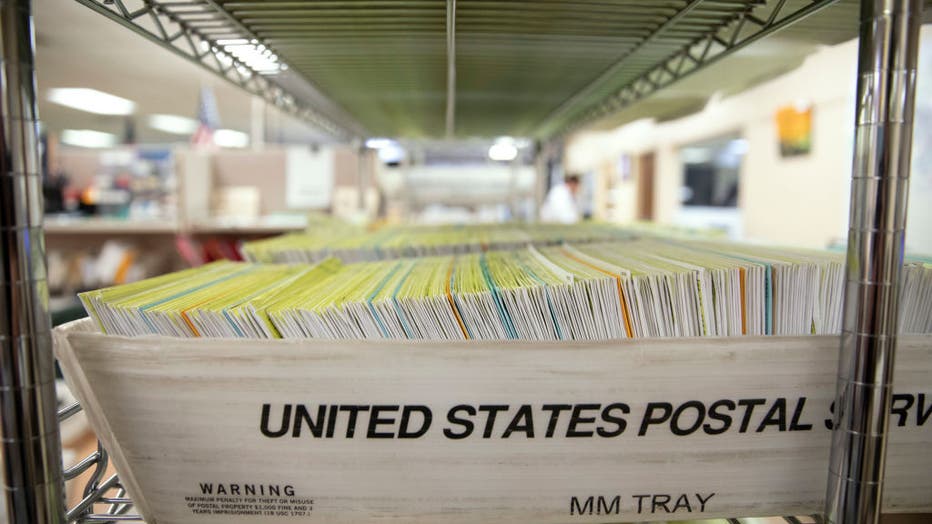 FILE - Mailed in ballots sit in US Postal Service bins inside the office of the Stanislaus County Clerk on November 6, 2018 in Modesto, California. Stanislaus County is in California's 10th Congressional District which is host to a close race for US (Photo by Alex Edelman/Getty Images)

The back-and-forth comes amid a vigorous campaign by Trump to sow doubts about mail-in voting as he faces a difficult fight for reelection against Democrat Joe Biden.

Though Trump casts his own ballots by mail, he’s repeatedly criticized efforts to allow more people to do so, which he argues without evidence will lead to increased voter fraud that could cost him the election. Meanwhile, members of Congress from both parties have voiced concerns that curbside mail boxes, which is how many will cast their ballots, have abruptly been removed in some states.

At the same time that the need for timely delivery of the mail is peaking, service has been curtailed amid cost-cutting and efficiency measures ordered by the DeJoy, the new postmaster general, who is a former supply-chain CEO and a financial supporter of Trump and other Republicans. He has implemented measures to eliminate overtime pay and hold mail over if distribution centers are running late.

Officials in more than a dozen states, including the presidential election battlegrounds of Michigan and Pennsylvania, all confirmed to The Associated Press on Friday that they had received the warning letters.

“This is a deeply troubling development in what is becoming a clear pattern of attempted voter suppression by the Trump administration,” Democratic Virginia Gov. Ralph Northam said in a statement. “I am committed to making sure all Virginians have access to the ballot box, and will continue to work with state and federal lawmakers to ensure safe, secure and accessible elections this fall.”

Kim Wyman, the Republican secretary of state in Washington state, where all voting is by mail, said sending fall ballot material to millions of voters there is a “routine operation of the U.S. Postal Service.”

“Politicizing these administrative processes is dangerous and undermines public confidence in our elections,” she said in a statement. “This volume of work is by no means unusual, and is an operation I am confident the U.S. Postal Service is sufficiently prepared to fulfill.”

Meanwhile, the removal of Postal Service collection mail boxes triggered concerns and anger in Oregon and Montana. Boxes were also removed in Indiana.

In Montana, postal officials said the removals were part of a program to eliminate underused drop boxes. But after the outcry, which included upset members of Congress, the officials said they were suspending the program in Montana. It was unclear if the program was also suspended in other states.

At least 25 mail boxes were removed in mid-July in Montana with another 30 scheduled to be taken away soon, said Julie Quilliam, president of the Montana Letter Carriers Association. She rejected the claim that the boxes were removed because of low usage.

“Some of the boxes scheduled to be removed from downtown Billings are nearly overflowing daily,” Quilliam wrote in a Facebook message.

All three members of Montana’s congressional delegation — two of whom are Republican — raised concerns about the removal of mail boxes in letters sent to Postmaster DeJoy.

“These actions set my hair on fire and they have real life implications for folks in rural America and their ability to access critical postal services like paying their bills and voting in upcoming elections,” said Sen. Jon Tester, a Democrat.

Republican Sen. Steve Daines and Rep. Greg Gianforte, also a Republican, raised similar concerns in letters to DeJoy about the effect the removal of the mail boxes might have on delivery times. All three asked for information on how the agency decided which boxes to remove and whether any more removals were planned.

“During the current public health crisis it is more important than ever the USPS continue to provide prompt, dependable delivery service,” said Gianforte.

“First-class mail volume has declined significantly in the U.S., especially since the pandemic,” Swanson said. “That translates to less mail in collection boxes."

The union said Trump has been hostile to the post office and has undermined it and its workers while Biden "is – was – and will continue to be – a fierce ally and defender of the United States Postal Service,” said union president Fredric Rolando.